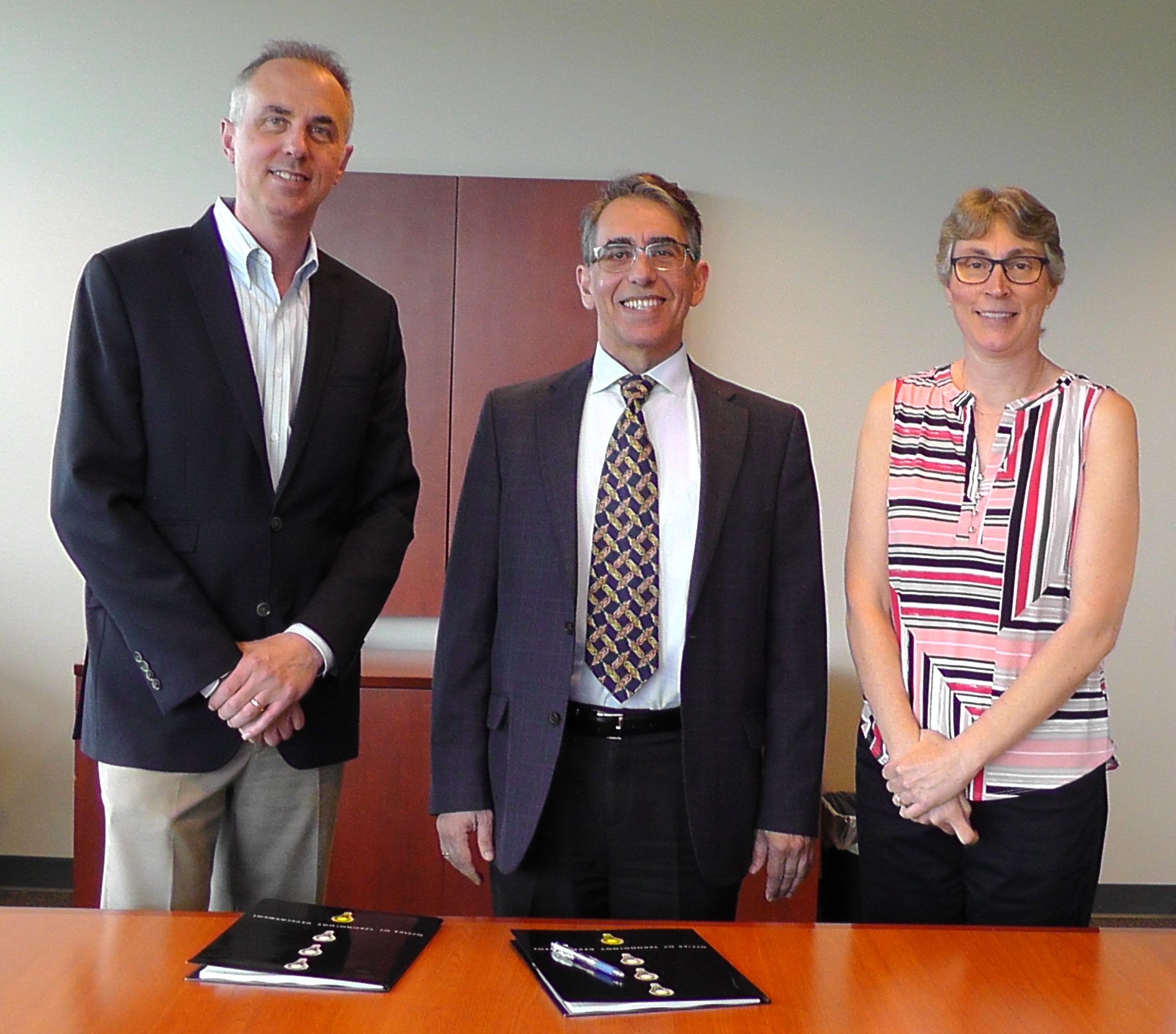 George Karabatis, center, with Gerard Eldering and Wendy Martin at the signing.

With the launch of the company, Karabatis and AlEroud enter phase three of TEDCO’s tech commercialization process, after completing robust market analysis and business planning to ensure a solid launch (in part through AlEroud’s dissertation research). Phase three will focus on commercializing the research, hiring officers and employees to run the company, and refining the technology behind Cyves’s cybersecurity product.

“This work is important because it reveals a new way of identifying incoming cyber attacks and actually stopping them, based on intrinsic features of the attacks and how these features correlate with each other,” says Karabatis. “In addition, this research is capable of identifying not only well-known attacks, but most importantly unknown attacks that have not been identified yet.”

Karabatis explains that the Cyves technology detects cyber attacks by analyzing characteristics of these intrusions at a high level, and comparing them with incoming traffic. By relying on semantic and contextual information, the Cyves technology is able to analyze existing attacks and behaviors and extrapolate findings that can be used to identify patterns and flag future attacks quickly after they occur. This approach to detecting cyber attacks not only identifies possible intrusions, but also reduces the number of false alarms that are raised.

In testing, Karabatis says, the technology accurately identified not only known cyber attacks, but also 90% of unknown (0-day) attacks that previously would have likely gone unnoticed. Identifying such attacks can play a significant role in protecting sensitive information like social security numbers, credit card numbers, and birthdates, stored in vulnerable databases.

“Technology transfer is just one piece of the continuum of support that is needed to advance new concepts developed by our researchers. Investment in research projects that have commercial potential, assistance in obtaining state proof-of-concept funding, and access to business incubation and mentoring all play a part,” says Wendy Martin, director of the office technology development. “We encourage entrepreneurial researchers, like George Karabatis, to start their own companies, so they can continue their involvement in bringing their innovations to the marketplace.”

Image: The Information and Technology Engineering building. Photo by Marlayna Demond ’11 for UMBC.