Cancer is most devastating when it metastasizes—when tumor cells break away, travel through the bloodstream, and then attach elsewhere, only to grow another tumor. A significant amount of scientific research has focused on finding ways to prevent metastasis. For some time, scientists have understood that a particular biochemical pathway, known as the PDK1 pathway, is active in metastasizing cancer cells. But no one knew why.

In a new paper published in PLOS ONE, Songon An and colleagues have shown for the first time that the PDK1 pathway regulates the formation of a three-protein complex that facilitates two chemical pathways: One builds purines (two of the four building blocks of DNA) and the other produces thiamine, a B vitamin. While it’s still unknown how purine and thiamine levels contribute to metastasis, the authors hypothesize ways they could be related, and they are planning further research to reveal any links. 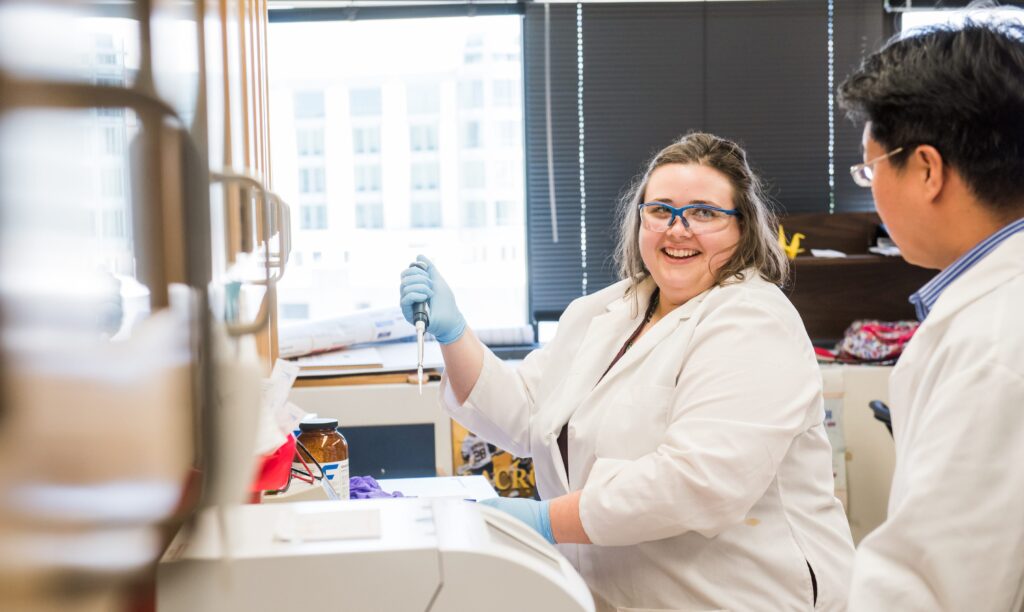 Danielle Schmitt, Ph.D. ’17, biochemistry, who is the first author on the new paper, works in the lab.

For example, the three-protein core complex that PDK1 regulates is sometimes joined by three more proteins. Together, the six proteins form a larger complex called the purinosome, which carries out all 10 reactions necessary to build purines. Without the three peripheral proteins, however, purine production only goes halfway, and the molecule the core complex makes is more likely to end up as the vitamin thiamine.

Making purines is an energy-intensive process, so one hypothesis is that decreasing purine production during metastasis helps the cell survive while it is detached from a nutrient source like an organ. “Looking at this metabolic switch—which pathways are in use during metastasis versus when the cell is attached—may be where our research goes in the future,” says An.

The team’s immediate next step is to validate the function of the three-protein core complex. After that, they’ll investigate whether the core complex and the six-protein purinosome are actively coming together and breaking apart in metastatic cells. “Blocking those dynamics could be an alternative way to block metastasis,” An says.

A broader goal for An and collaborator Greg Szeto, UMBC assistant professor of chemical, biochemical, and environmental engineering, is to map the various protein complexes and the signaling pathways they regulate in cancer cells. “We want to put every signaling pathway into the same context,” An explains. “Whenever the proteins have different spatial assemblies, we would like to know which pathways are on and which ones are turned down.”

So far, the researchers have only looked at one pathway at a time (such as PDK1), but by using a cutting-edge technique that can detect many proteins at once within a cell, “now we are going to target multiple signaling pathways at the same time, so that we can understand the complete picture of the regulatory map for purine metabolism.” That knowledge could provide more new insights into the causes of metastasis and how to prevent it.

Image: Songon An and Danielle Schmidt in the lab. Photos by Marlayna Demond ’11 for UMBC.