IMPORTANT: You are using an older version of Other that may not be supported in the future. Upgrade Now
Classic
College of Engineering and Information Technology
Institutional Group • 91 people
2

Thousands of Retriever graduates, family, and friends streamed into the new UMBC Event Center last week to celebrate spring commencement, as the ceremonies returned to Hilltop Circle for the first time in two decades. The new arena quickly filled with crowds of cheering supporters, with more tuning in to UMBC’s live webcasts from around the globe.

The class of 2018 receives thunderous support from the crowd during this year’s commencement exercises.

O’Shea reflected on the tremendous promise of UMBC’s graduates as leaders of tomorrow, telling graduates:

UMBC hosted two undergraduate ceremonies on Thursday, May 24, including a morning commencement for the College of Arts, Humanities, and Social Sciences, School of Social Work, and Erickson School, and an afternoon ceremony for the College of Natural and Mathematical Sciences, College of Engineering and Information Technology, and Interdisciplinary Studies.

The class of 2018 prepares to turn their tassels.

Kara Seidel ’18, psychology, valedictorian of the morning ceremony, shared her family’s deep connection to UMBC, where her parents and brother also earned their degrees. She reflected that, initially, she was uncertain about whether she could create her own unique path at the university. But once she stepped onto campus, she joked, “the UMBC community sucked me in,” and her college career was full speed ahead. 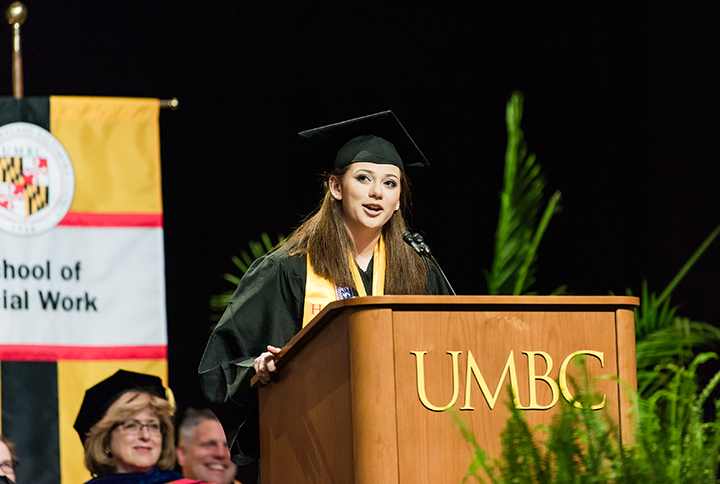 While studying at UMBC, Seidel accessed opportunities to work in the Trauma Lab of Christopher Murphy, professor and chair of psychology; in an HIV/addiction lab at Johns Hopkins; and at the American Psychological Association. These experiences helped her identify her core interest in the field of psychology: supporting families dealing with trauma.

The people of UMBC have also had a lasting impact on Seidel. She reflected, “We have had the opportunity to learn, not just in the classroom, but as members of a diverse, civic-minded community.”

A sea of decorated caps filled the UMBC Event Center.

Honorary degree recipient Ted Mitchell, president of the American Council on Education, addressed graduates in the morning ceremony. “Achieving excellence, no matter what your background, that’s the greatest victory of all,” he reflected. He also brought some levity to the festivities in recalling UMBC’s history-making NCAA victory, joking that UMBC helped advance his bracket because he chose his winning teams based on academic reputation.

Valedictorian Eudorah Vital ’18, biochemistry and molecular biology, addressed her classmates during the afternoon undergraduate commencement ceremony. “There are three things from our UMBC experience that I believe we can all carry with us into our next pursuits,” she said. “They are: (1) learning to be comfortable with discomfort, (2) upholding the value of diversity, and (3) the practice of gratitude.”

Vital became highly involved in research beginning in her freshman year, as a Meyerhoff Scholar, MARC U*STAR, and Howard Hughes Medical Institute Scholar. She has already co-authored two papers in top academic journals, and a third is coming soon. Her interest in completing clinically relevant research in an inclusive scientific community, like the one she found at UMBC, led her to select Emory University’s M.D./Ph.D. program in neurobiology as her next step.

Paula A. Johnson, president of Wellesley College, addressed graduates of the afternoon ceremony as an honorary degree recipient. Like Vital, Johnson spoke of the special nature of UMBC’s learning community. She reflected, “All of you have lived and learned within this remarkable culture, one that embodies the best of the nation’s values and ideals.”

Michelle Gourdine represented the University System of Maryland Board of Regents at the ceremonies, and shared her perspective on UMBC’s success. “By any measure—national rankings, research partnerships, public service activities, faculty accomplishments, student achievements…and let’s not forget athletic achievement—UMBC stands as one of the finest universities in the country,” she said.

Peng Chu celebrates with his family after being awarded his Ph.D.

President Hrabowski’s remarks this year focused on an appreciation for the value of truth and integrity, as well as service and commitment to community. He took time to honor veterans and graduating students who will pursue careers in social work and teaching. He also encouraged guests to read UMBC’s Class of 2018 feature, which highlights the personal stories of 43 Retrievers recognized for academic excellence and demonstrating a commitment to a greater good through research, scholarship, creativity, and work with underserved communities.

Before the graduates turned their tassels, he reminded them:

A UMBC graduate celebrates the conclusion of her college career.

Header image: CWIT Scholars celebrate together one last time. All photos by Marlayna Demond ’11 for UMBC.