will provide a snapshot of Chesapeake Bay region

This summer, students and faculty from UMBC and three additional universities teamed up with NASA researchers and Maryland’s Department of the Environment to collect huge amounts of data that will provide a snapshot of air quality in the Baltimore-Washington metropolitan area and over the Chesapeake Bay. The study measures factors ranging from wind speed to ozone concentration.

“In trying to understand air quality near the coast, it’s critical to obtain measurements over the water and over the land simultaneously with as wide of a variety of instruments as possible,” says John Sullivan, Ph.D. ’15, atmospheric physics, and the lead NASA researcher on the project.

UMBC serves as the primary land-based site, and equipment placed on remote Hart Miller Island in the Bay collects data over water. “With two sites, you can begin to really answer questions pertaining to differences in air pollution and understand the mechanisms driving these differences,” Sullivan explains. 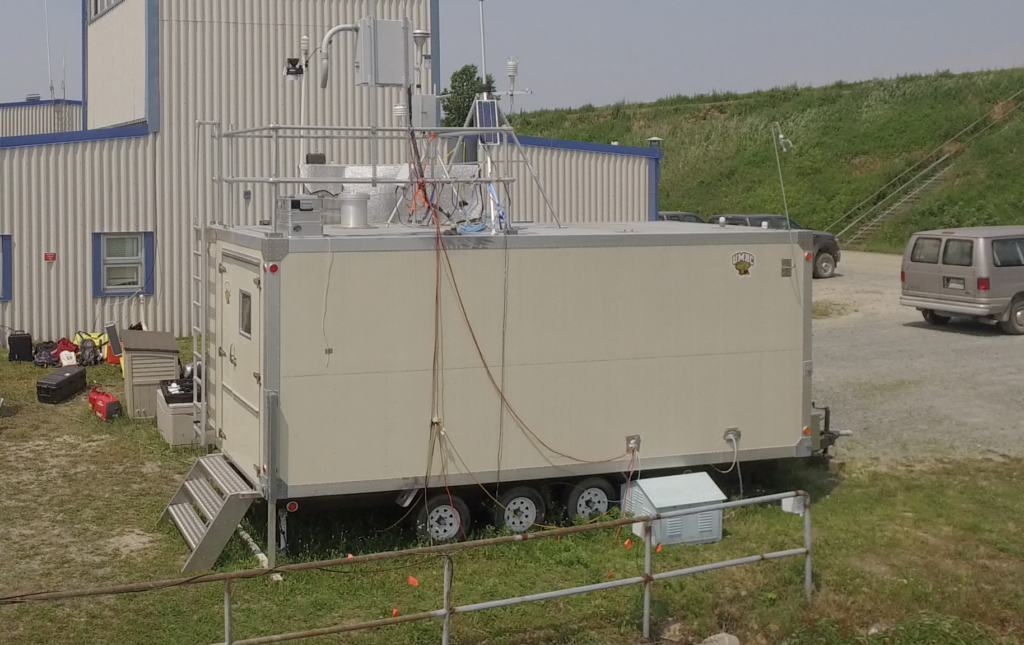 The UMBC research trailer on Hart Miller Island in Chesapeake Bay, one of two “super sites” for OWLETS and OWLETS-2 data collection. The other super site is the UMBC campus. Photo: Peninsula Drone Services, LLC

Ozone in the forecast

This summer’s work is an extension of the Ozone Water-Land Environmental Transition Study (OWLETS), dubbed OWLETS-2, and it is particularly focused on tracking the presence of ozone in coastal cities. Ozone in the upper atmosphere helps maintain Earth’s temperature and absorbs harmful UV rays.

However, near ground level, breathing in ozone causes inflammation in the respiratory system, which can be dangerous for young children, the elderly, and those with asthma or other respiratory conditions. Plants also take up ozone, which can reduce crop yields.

Chemical reactions between sunlight and emissions from vehicles and industry generate smog-like ozone episodes, so one would expect the highest concentrations at midday, when the sun is at its brightest. However, wind over the Bay changes that.

“The Bay breeze is like a wall that doesn’t allow normal west to east airflow to happen,” explains Ruben Delgado, assistant professor at the Joint Center for Earth Systems Technology (a UMBC-NASA partnership) and the lead UMBC OWLETS-2 researcher. That means the midday ozone heading out to sea comes back in during the late afternoon, causing a spike just as local residents are heading home from work and school. Other factors, such as smoke blowing over the city from wildfires in the West, can also have a real impact.

Better understanding how these issues influence the presence of ozone in Baltimore can help improve air quality forecasts and protect sensitive populations from ozone’s ill effects. “The National Weather Service is interested in this kind of data, because it allows them to push their models to a new frontier,” Delgado explains.

Working with Delgado are students from UMBC, Howard University, City University of New York, and Hampton University. The students and their home-institution faculty mentors are all members of the NOAA-funded Center for Earth System Sciences and Remote Sensing Technologies and Center for Atmospheric Sciences and Meteorology.

Delgado finds mentoring these emerging researchers to be both personally rewarding and essential to the success of the project. “My favorite part of this project is giving the students hands-on experience,” Delgado says. “They get to contribute to the process from start to finish.”

Kat Ball ’21, chemical engineering, is one of those student researchers, and her experience has been transformative. “I feel so fortunate to have had the opportunity to participate in meaningful scientific research so early on in my academic career,” she shares. “I’ve only just completed my freshman year, and will be one of the authors on the publications that result from all the data we received, which is something I thought I would only be dreaming about for quite some time.”

Ball learned that field and lab research differ in important ways. “Not everything is easy to deal with when you’re miles away from an actual lab where you have all of the necessary parts, chemicals, and even just clean water that you need to deal with problems that arise,” she says.

Working with much more experienced team members, Ball was intimidated at first, but soon felt at home on Hart Miller Island. “Hearing from people with such impressive qualifications that your input on the situation truly matters expanded the confidence I had in myself as a researcher,” she shares.

John Sullivan, the lead NASA researcher, was once in Ball’s shoes, and now he’s paying it forward. “As I moved toward planning larger-scale campaigns, I knew that I wanted to involve UMBC any way I could,” he says. “It wasn’t until I got to NASA that I realized how much of a leg up I had coming from UMBC, as some of my classes were taught by leading researchers in the atmospheric physics community.”

Under Sullivan and Delgado’s leadership, the participating students all took a very active role in the research. “They have been busy taking LiDAR measurements, launching weather balloons, taking mobile samples of pollution, and outfitting research vessels,” Sullivan says. He adds, “There is something very rewarding about bringing together active and engaged researchers to make a difference in public health, and training the next generation of scientists along the way.”