Each UMBC student has a unique journey, including challenges to tackle with tenacity, courage, and grit. For many of UMBC’s newest grads, a culture of community support has made all the difference, enabling them to both claim their future and help others along the way.

Jeffrey Inen, graduating with a biological sciences degree this week, grew up down the road from UMBC, but his college journey has had unexpected twists and turns. Support from his UMBC community, particularly faculty mentors, helped him to persevere through significant health challenges. Ultimately, Inen would undergo five rounds of chemotherapy while completing his UMBC degree, doing impactful research, serving as a teaching assistant in cell biology, and holding down a full-time job.

“Enduring my struggles with chemotherapy and trying to obtain my degree felt impossible at times,” says Inen. But after taking some time off and starting anew within the biology department, Inen found the support system that would allow him to not only graduate from UMBC, but flourish academically and personally. 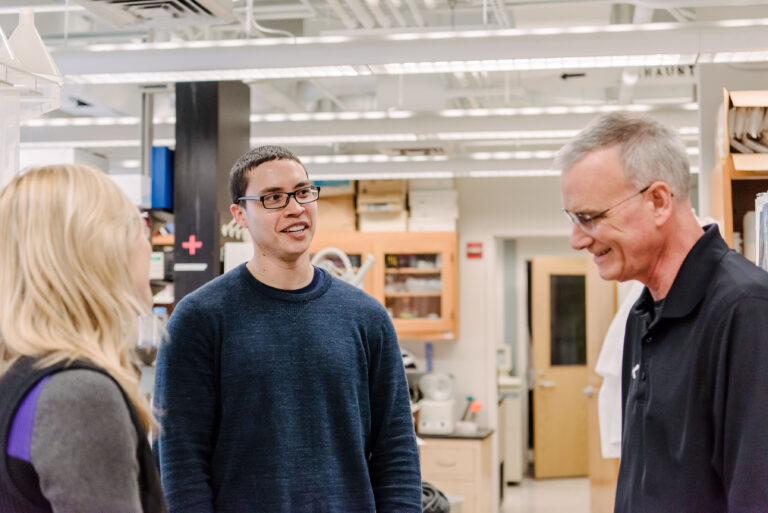 “Dr. Bieberich has supported me from the beginning. Even when I’ve made mistakes in the lab, he’s never once given up on me,” says Inen. When he became ill earlier this semester and spent several days in the hospital, Bieberich visited almost daily.

“It has been a true inspiration for me having Jeff in the lab, knowing the physical setbacks he has overcome in the past few years,” says Bieberich. “He brings that same determination to overcome any and all obstacles to his work, and that’s exactly what it takes to succeed in biomedical research environment.”

“Despite his ongoing struggles,” Bieberich says, “he just continues to work hard and continues to be grateful for the opportunity to contribute to our research goals. I’ve learned more from Jeff than he has from me.”

Inen has also developed a close connection with Michelle Starz-Gaiano, associate professor of biological sciences and his academic advisor, as well as a mentor. Inen says, “I can’t express how helpful she has been throughout my time here at UMBC. She has given me the guidance and the support to pursue my goal of obtaining my Ph.D.” 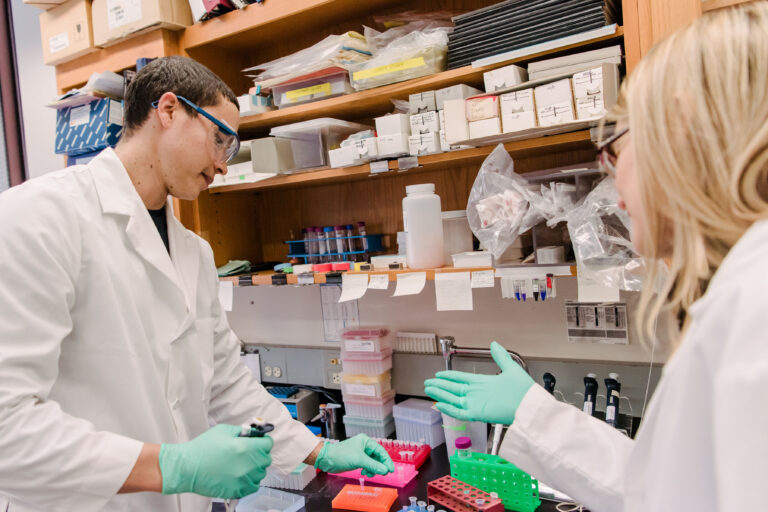 Inen in the lab with Michelle Starz-Gaiano. Photo by Marlayna Demond ’11 for UMBC.

“The inspiring thing about Jeff is that not only did he persist in the face of extreme difficulties, he remained optimistic and hopeful throughout,” says Starz-Gaiano. “Jeff faced challenges…that would have derailed most people, but he kept going, and kept improving.”

Inen showed that persistent drive to grow, learn, and discover when he earned a summer 2018 research award through the Louis Stokes Alliances for Minority Participation program.

After commencement, Inen will continue to work in Bieberich’s lab on his ongoing research. In the summer he will begin STAR-PREP, a post-baccalaureate program at the University of Maryland School of Medicine.

On September 20, 2017, Hurricane Maria touched down in Puerto Rico. Over 1,500 miles away in Maryland, Paola Rojas, business technology administration, was in the midst of her studies at UMBC. But her heart was with her hometown of San Lorenzo.

An avid athlete and strong student, Rojas quickly made a name for herself when she came to UMBC in fall 2014. She finished her first season with 11 match appearances and was named to the All-Rookie Team. Accolades continued to roll in throughout her career and she managed to secure a place on the All-Conference First Team and All-Conference Second-Team, even after suffering an injury in the 2016-2017 season. 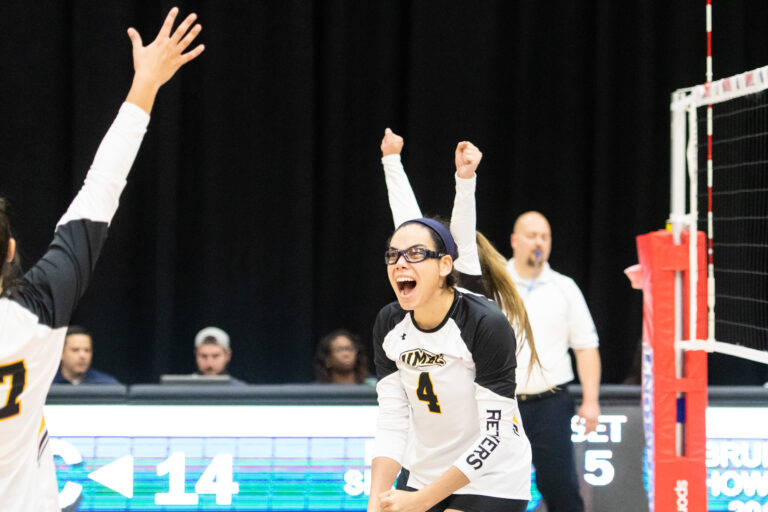 Rojas found a new family of support at UMBC and in the surrounding community. That was never more evident than when disaster befell Puerto Rico.

She and other players from Puerto Rico turned to one another for support while they waited for days to hear news from home, with communications hampered by hurricane damage. After over a week of waiting, Rojas finally heard from her family. 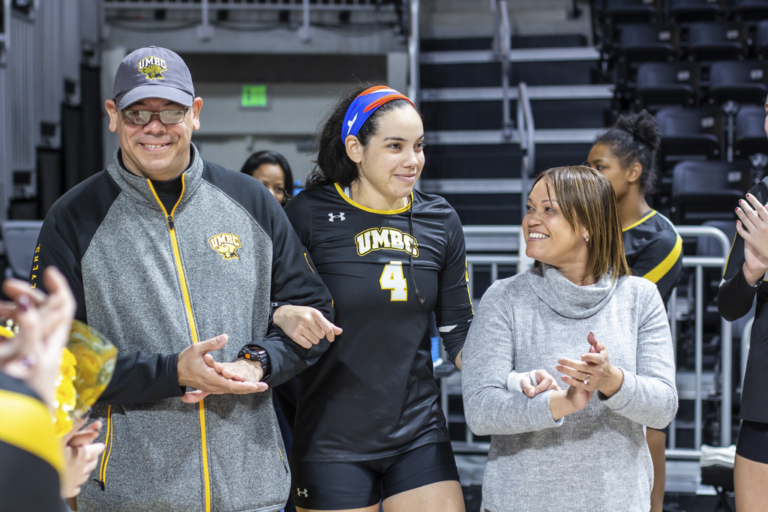 Paola Rojas with her family during UMBC Senior Night. Photo courtesy of Rojas.

“It was really hard the first time I talked to my mom after the hurricane, on September 27, her birthday, hearing her cry over the phone talking about how Puerto Rico looked like a completely different island and how getting food or gas was beyond hard,” she says. “It broke my heart to know that my family was going through a lot and I couldn’t do anything to make it better.”

Energized by support from teammates and the broader UMBC community, Rojas and friends started a GoFundMe page called Project PRdise to aid in relief efforts in Puerto Rico. Through their fundraising efforts, they were able to raise over $10,000 and gather thoughtful personal messages to support those devastated by Hurricane Maria.

“It was one of the best experiences I’ve had here at UMBC, to see how much people cared and helped,” says Rojas. 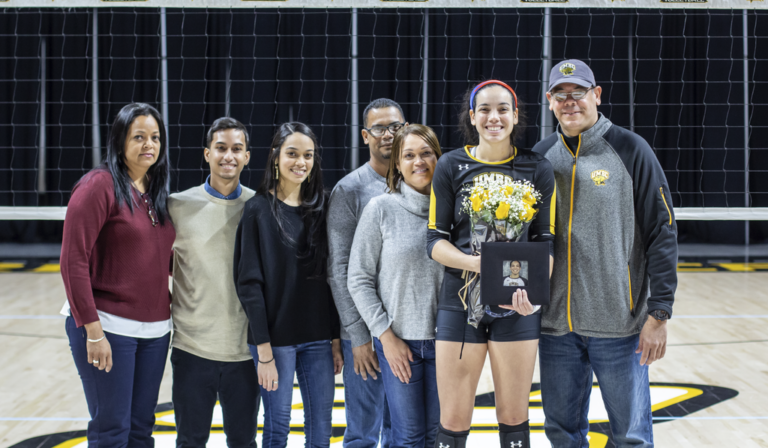 Head women’s volleyball coach Cristina Robertson provided mentorship and encouragement for Rojas along the way. “Paola exemplifies the student-athlete model,” shares Robertson. “She’s a great student in the classroom and a phenomenal athlete on the volleyball court.”

One memory of her time with her coach stands out to Rojas, from the team’s Senior Day celebration. “I still remember when Coach Cristina was giving her speech. She delivered a portion of it in Spanish so my family could understand,” says Rojas. “That was one of the best days of my life.”

This week, Arabia-Iman Tillery, economics, will become the first member of her family to earn a college degree. For a time, she was worried it might not happen.

Tillery started her college career at another university, taking out large loans to pay her tuition. Facing significant debt after just one year, she decided to return home to Maryland and enroll at UMBC. Bolstered by her mother’s support, Tillery rededicated herself to completing her degree. She shares, “I was determined to climb out of that hole…and come out a better person.”

Tillery threw herself into new pursuits on campus, which quickly shaped her day-to-day routine. She’s served as vice president of the Women’s Center’s Women of Color Coalition and a co-founder and president of the Spanish Conversation Club. She’s also interned with Habitat for Humanity and served as treasurer for the UMBC chapter, all while balancing work and her degree.

“With the guidance and support of several members of the UMBC community, I was able to earn great grades while also being involved with other students on campus,” she says.

Tammy Henderson, lecturer of Africana studies and a mentor of Tillery’s, shares, “Arabia is one the most determined and committed students I have had the pleasure of teaching. Her ability to persist despite the obstacles she has had to face makes her a person we should all admire.”

After earning her UMBC degree this week, Tillery will work as a project coordinator for a security company. Thinking back on how much she has achieved and what it took to get here, she shares, “UMBC never, ever gave up on me…UMBC always saw my potential.”