Necessity can inspire innovation and sometimes, UMBC’s Emma Neubert will tell you, that innovation comes in the form a cuddly critter with eight limbs that makes silly sounds. Neubert ‘21, biochemistry, earned first prize in UMBC’s annual Idea Competition, hosted this month by the Alex. Brown Center for Entrepreneurship. She was one of eight students selected to participate in the pitch competition, where students present their innovative ideas to a panel of judges.

Participants spend hours refining their presentations and receiving feedback from their mentors, as well as faculty, staff, family, and friends, says George Karabatis, associate professor of information systems and director of UMBC’s entrepreneurship and innovation minor. Their goal: to gain the funding and professional advice needed to make their ideas a reality.

Leading up to the competition, Neil Rothman, professor of practice in mechanical engineering and faculty fellow through the Alex. Brown Center, always reminds students that their presentations are stories. “Being able to frame the story and present it in a concise way is the most important part of the competition,” Rothman explains.

Neubert’s story begins with babysitting a young child who was frustrated with not being able to communicate his feelings and needs. In response, she developed the concept for Octotalk, a knit octopus that makes noises to help young children share their emotions.

Hoping to avoid future stress and tears, Neubert began brainstorming on ways to help the child she babysits to express his thoughts and feelings. “He loves soft toys and really likes watching me knit,” Neubert says. “When I learned to knit the octopus, I thought, it has eight arms that could be used to cue different responses.”

In Neubert’s design, each arm is associated with a specific emoji and a unique sound that will help a child “answer simple questions and share how they are feeling.”

When it came time to present Octotalk to the judges, Neubert was confident in her vision. “This project is near and dear to me, and I knew what I wanted people to know about it,” she says.

The Braid Saver is an automatic braiding and twisting tool that styles hair and eliminates the need to intertwine sections of hair by hand, explains second-prize winner Elyssa Ferguson ‘20, mechanical engineering. Ferguson was inspired by her desire to spend less time styling her naturally curly hair without using chemical straighteners.

“With little time to spare, I have turned to braids as my go-to low-maintenance style during the semesters. Although braids do not require as much time as other styles, doing them still takes up time that could be used to study or do other things,” Ferguson says. “After continually becoming frustrated with the time I had to set aside to braid my hair, I was inspired to create a braiding and twisting device that would make hair styling more efficient.”

Encouraged to enter the Idea Competition by entrepreneurship instructor Aaron Altscher, Ferguson began sketching iterations of her ideal solution to visualize how the components would look and work. “I hope to develop this tool and sell it in salons and to anyone who wants an easier way to braid or twist hair,” she says. “Inclusivity is very important, so the Braid Saver will be designed to intertwine all textures of hair.” 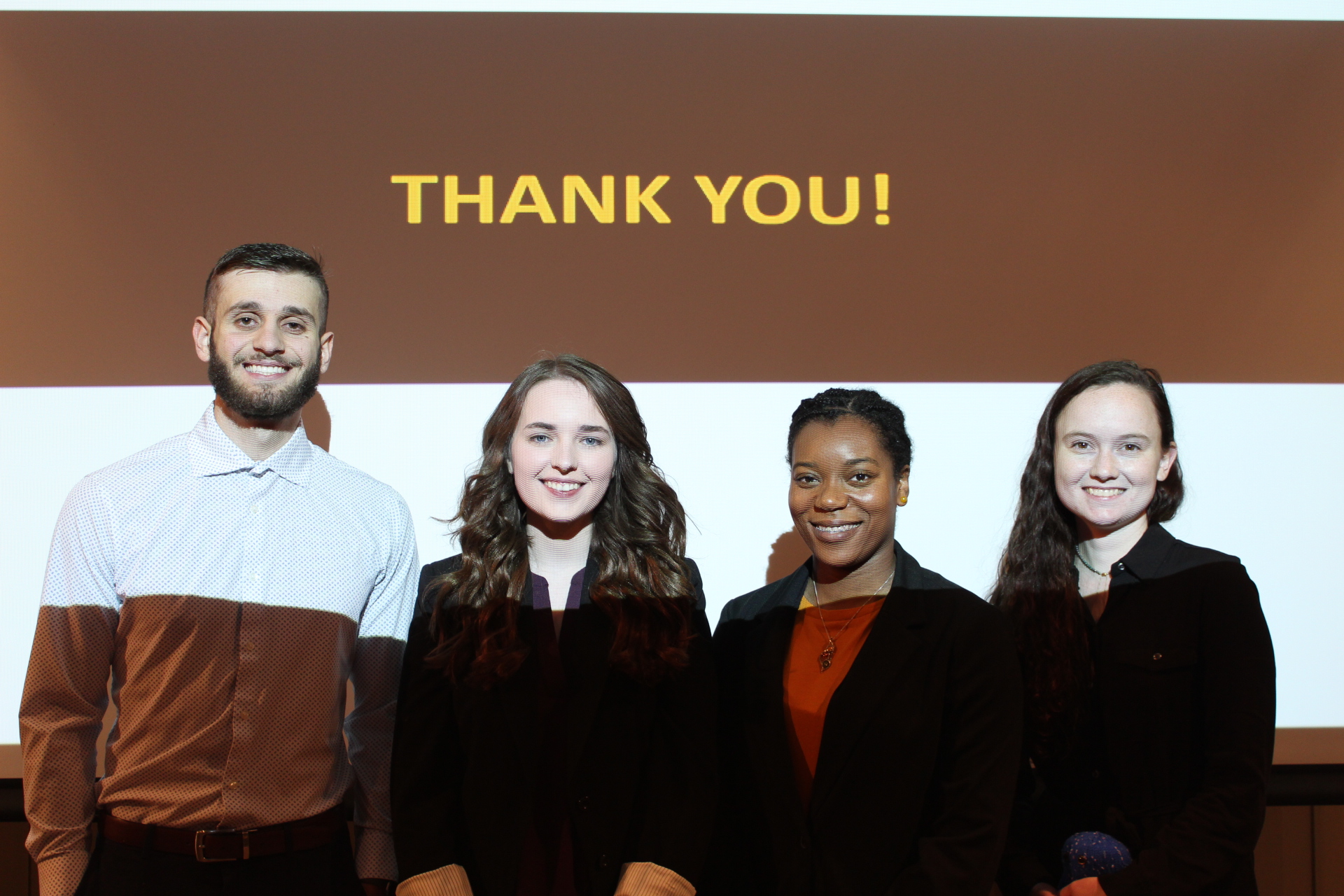 Third place prize winner Laura Holland ‘22, computer science, wants to use her passion for technology to connect people with low-cost alternatives to fast food. Holland’s awareness of food deserts in Baltimore City led her to the idea for MyPlateAwaits, an app to connect local businesses, community gardens, and markets with people in the community who are looking for healthy, affordable food options.

She explains that the goal of MyPlateAwaits is to offer food that is as inexpensive as fast food, but that is healthier. The app will allow people to purchase meal plans, such as five or ten meals a week, to accommodate their schedules and needs. The more meals people buy, the lower their cost per meal. “My goal is to facilitate growth in these communities,” Holland says.

Holland is the secretary for the new UMBC Entrepreneurs student group, which works to create opportunities for students to develop ideas and get feedback from each other in an informal setting. “You can’t do it alone, so it’s great to collaborate,” Holland says.

Niky Sicilia ‘21, business technology and administration, received “best presentation” recognition at the Idea Competition for InPulse, software that would collect data related to concerts and other performances, from both performers and audience members, to help shape future experiences.

Sicilia’s goal is to eventually start and own a company. He was eager to get connected with the Alex. Brown Center after transferring to UMBC from Howard Community College, and he’s already looking ahead to UMBC’s Cangialosi Business Innovation Competition in the spring.

“The resources at UMBC are unlimited,” Sicilia says. “You just have to be willing to talk to people. Coming to UMBC has been the best thing for my career.”

One competitor, Randy Deinlein ‘20, mechanical engineering, has already presented his ideas on an international stage. Deinlein is a Grand Challenge Scholar, and is pursuing a minor in entrepreneurship. He represented UMBC at the Global Grand Challenges Summit in London this past summer, and seeing London’s dense cityscape gave him even more ideas about the potential of green rooftops. At this month’s competition, Deinlein shared his idea called Roof Roots, which would involve planting trees and other greenery on top of tall buildings to support the environment and improve the aesthetics.

He says that attending Alex. Brown Center seminars and having the opportunity to do a practice presentation and receive feedback allowed him to refine his pitch before the competition. As he’s developed his presentation skills over the past several months he’s learned, “Don’t be scared to share your ideas. It’s okay to take risks.”

The Alex. Brown Center offers a wide variety of initiatives, competitions and resources to assist students in developing their entrepreneurial skills and interests, explains Vivian Armor ‘73, American studies, director of the Alex. Brown Center for Entrepreneurship. “The annual Idea Competition is a wonderful way for us to showcase the incredible creativity of our students and to help them flesh out their ideas,” she says.