MII and btwtech help to commercialize the research

Wind turbines are massive, with a single turbine blade measuring up to 350 feet (about 110 meters), longer than the wingspan of some commercial airplanes. At its highest point, a blade can be 850 feet (260 meters) off the ground, almost reaching the height of Eiffel Tower. When UMBC engineer Soobum Lee looks up at these turbines, generating energy in fields and even offshore, he thinks about their size as an enormous opportunity, and also a challenge.

Lee, associate professor of mechanical engineering, studies energy harvesting, but not in a way that most casual observers would connect with wind turbines. He researches how vibrations can power portable devices on a very small scale, and he develops devices that convert those subtle vibrations into energy.

A few years ago, Lee began exploring how to harvest energy from the rotation of vehicle tires. This led him to begin looking at the spinning motion of wind turbines, and the additional small vibrations that turbines make as they spin continuously. He came up with a novel idea: using these small vibrations—not previously harnessed for energy—to power transmitters that could send sensor data to a wind turbine’s operation and maintenance systems.

Lee explains that wind turbines have sensors on their blades to alert their operators if the blade gets damaged, such as by birds or lightning, or if there is a malfunction or maintenance issue. For example, icicles can form on turbine blades, changing their aerodynamics. Or, the blade could be vibrating abnormally, indicating a more serious mechanical or structural issue in the blade.

Until now, these sensors have been powered by batteries that need to be changed every two years or so. Changing the batteries is time-consuming and can be dangerous for people maintaining the turbines, as they need to climb up the turbines, hundreds of feet in the air, to access multiple sensors on one blade.

“The sensors are to help with maintenance,” says Lee. “If they also create a maintenance need, it’s a problem.” He wondered, what if you could design a sensor that wouldn’t require new batteries?

Over the past 7 years, UMBC faculty from engineering and the sciences to the arts have worked to commercialize their research, to bring innovative technologies to companies and consumers. Knowing that this can be a challenging transition, UMBC and the State of Maryland have created a range of initiatives to help faculty pursue entrepreneurship opportunities. One core opportunity is the Maryland Innovation Initiative (MII), established by the state and five research institutions, including UMBC, to promote research commercialization.

A unique feature of the MII program is the introduction of university “site miners” to facilitate the application process for faculty inventors. These commercialization experts support faculty with preparing proposals and advocate for projects in the review process. UMBC site miner David Fink, entrepreneur in residence, says, “The MII program is the most significant factor in the increased commercialization of UMBC-owned intellectual property.” Sixteen companies have been formed by UMBC faculty since the start of MII.

Since 2013, Lee has applied for three MII grants. His first two attempts were not successful but helped him grow his proposal. On his third try, he received a phase one grant to develop his vibration-powered sensor technology.

Through bwtech@UMBC, UMBC’s research and technology park, Lee connected with Pranay Kohli, an energy sector executive with experience working with companies and clients around the world. In 2018, Lee and Kohli founded ACTIVEcharge, LLC, a startup that develops solutions to autonomously monitor wind turbines. 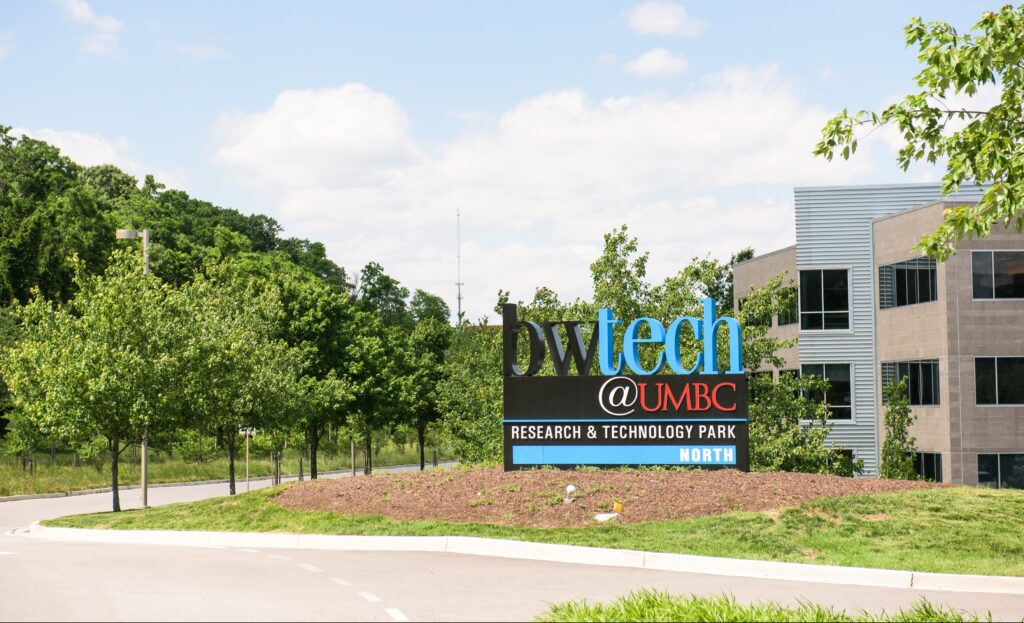 Entrance to btwech@UMBC. Photo by Marlayna Demond ’11 for UMBC.

“Soobum and I have benefited tremendously from the MII program. Although we had the technology and the business skills, what MII and bwtech provided us was the ecosystem of professionals who have guided us along the way,” says Kohli, CEO of ACTIVEcharge. “That has opened up so many doors for us as we move forward to commercializing the solution.”

Technology with an impact

Lee’s work has continued to move forward since he received the MII grant. In the lab, he and his students have developed a power management circuit and have integrated it with a power source, sensor, and data transmitter that is about six inches tall and weighs about two pounds.

The sensor provides the signal to the transmitter, and the transmitter sends the data to a receiver. This process uses the energy produced by the attached mechanical generator, powered by vibrations from turbine blades. No external source of energy is needed. It is also designed to sit inside the blades, so it is completely protected from the elements and does not interfere with the blade aerodynamics.

The device that contains the sensor. Photo by Marlayna Demond ’11 for UMBC.

Lee and Kohli hope that, in the next two to four years, their integrated solution will be installed on turbine blades across the country and internationally. Their goal is to provide turbine maintenance crews with near-real-time data that can support their work in a way that doesn’t create additional labor or physical risk and prevents potential catastrophic events.

Sustainable energy projects are growing in the U.S., and now is an important moment to make technology improvements that will boost that growth further, Lee notes. He shares, “I want to make things even better than they are now.”