This story was written by Karuna Janeja, assistant professor of information systems, and first appeared in The Conversation

You’re trailing bits of personal data – such as credit card numbers, shopping preferences and which news articles you read – as you travel around the internet. Large internet companies make money off this kind of personal information by sharing it with their subsidiaries and third parties. Public concern over online privacy has led to laws designed to control who gets that data and how they can use it.

Internet companies must adhere to these regulations or risk expensive lawsuits or government sanctions, such as the Federal Trade Commission’s recent US$5 billion fine imposed on Facebook.

But it is technically challenging to determine in real-time whether a privacy violation has occurred, an issue that is becoming even more problematic as internet data moves to extreme scale. To make sure their systems comply, companies rely on human experts to interpret the laws – a complex and time-consuming task for organizations that constantly launch and update services.

My research group at the University of Maryland, Baltimore County, has developed novel technologies for machines to understand data privacy laws and enforce compliance with them using artificial intelligence. These technologies will enable companies to make sure their services comply with privacy laws and also help governments identify in real time those companies that violate consumers’ privacy rights.

Governments generate online privacy regulations as plain text documents that are easy for humans to read but difficult for machines to interpret. As a result, the regulations need to be manually examined to ensure that no rules are being broken when a citizen’s private data is analyzed or shared. This affects companies that now have to comply with a forest of regulations.

Rules and regulations often are ambiguous by design because societies want flexibility in implementing them. Subjective concepts such as good and bad vary among cultures and over time, so laws are drafted in general or vague terms to allow scope for future modifications. Machines can’t process this vagueness – they operate in 1’s and 0’s – so they cannot “understand” privacy the way humans do. Machines need specific instructions to understand the knowledge on which a regulation is based.

One way to help machines understand an abstract concept is by building an ontology, or a graph representing the knowledge of that concept. Borrowing the concepts of ontology from philosphy, new computer languages, such as OWL, have been developed in AI. These languages can define concepts and categories in a subject area or domain, show their properties and show the relations among them. Ontologies are sometimes called “knowledge graphs,” because they are stored in graphlike structures. 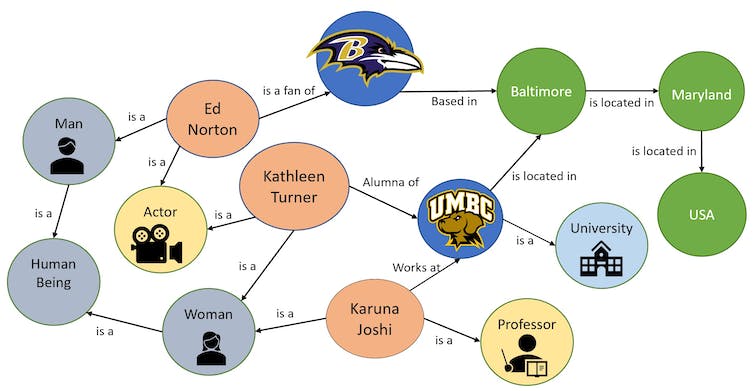 When my colleagues and I began looking at the challenge of making privacy regulations understandable by machines, we determined that the first step would be to capture all the key knowledge in these laws and create knowledge graphs to store it.

The key knowledge in the regulations consists of three parts.

First, there are “terms of art”: words or phrases that have precise definitions within a law. They help to identify the entity that the regulation describes and allow us to describe its roles and responsibilities in a language that computers can understand. For example, from the EU’s General Data Protection Regulation, we extracted terms of art such as “Consumers and Providers” and “Fines and Enforcement.”

Next, we identified Deontic rules: sentences or phrases that provide us with philosophical modal logic, which deals with deductive behavior. Deontic (or moral) rules include sentences describing duties or obligations and mainly fall into four categories. “Permissions” define the rights of an entity/actor. “Obligations” define the responsibilities of an entity/actor. “Prohibitions” are conditions or actions that are not allowed. “Dispensations” are optional or nonmandatory statements. 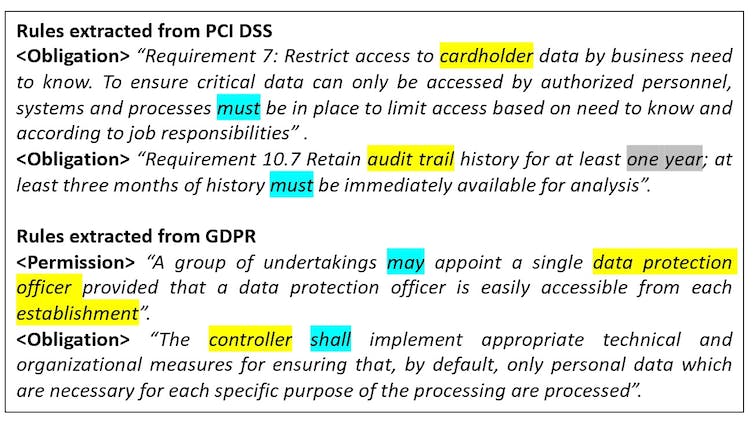 The researchers’ application automatically extracted Deontic rules, such as permissions and obligations, from two privacy regulations. Entities involved in the rules are highlighted in yellow. Modal words that help identify whether a rule is a permission, prohibition or obligation are highlighted in blue. Gray indicates the temporal or time-based aspect of the rule.
Karuna Pande Joshi, CC BY-ND

To explain this with a simple example, consider the following:

Some of these rules apply to everyone uniformly in all conditions; while others may apply partially, to only one entity or based on conditions agreed to by everyone.

Similar rules that describe do’s and don’ts apply to online personal data. There are permissions and prohibitions to prevent data breaches. There are obligations on the companies storing the data to ensure its safety. And there are dispensations made for vulnerable demographics such as minors. 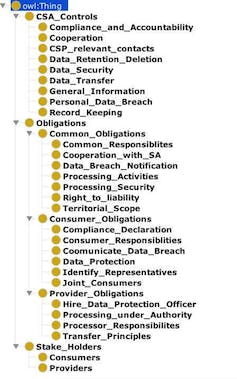 My group developed techniques to automatically extract these rules from the regulations and save them in a knowledge graph.

Thirdly, we also had to figure out how to include the cross references that are often used in legal regulations to reference text in another section of the regulation or in a separate document. These are important knowledge elements that should also be stored in the knowledge graph.

Rules in place, scanning for compliance

This technology can also help individuals get a quick snapshot of their rights and responsibilities with respect to the private data they share with companies. Once machines can quickly interpret long, complex privacy policies, people will be able to automate many mundane compliance activities that are done manually today. They may also be able to make those policies more understandable to consumers.

Header image by rupixen.com on Unsplash.