“We are so proud of UMBC’s Goldwater Scholars. Each student will make significant contributions to their respective fields, as future Ph.D.s,” says April Householder, director of undergraduate research and prestigious scholarships at UMBC.

“Their research—in neuroscience, genetics, and machine learning bias—is timely and important,” Householder says. “We can’t wait to see where they will take it with the help of this scholarship.”

Brooks, Fagboyegun, and Troutman are among the 396 winners selected this year. More than 1,300 students applied from 461 institutions across the country.

This year, the Goldwater Scholarship modified their nomination guidelines and allowed each institution to send forward up to five nominees, with one spot specifically designated for a transfer student. Fagboyegun is the first UMBC transfer student to receive a Goldwater.

Troutman currently serves as student commissioner for the Maryland Higher Education Commission (MHEC), and is committed to both research and leadership. His research, at the intersection of technology and policy, focuses on eliminating biases in computer algorithms. 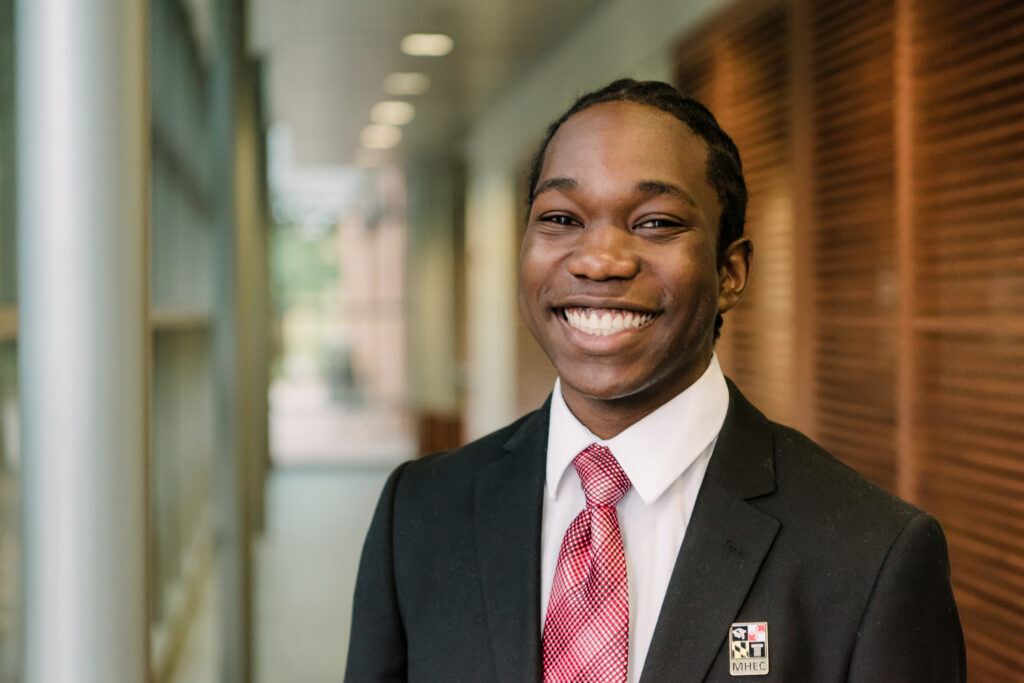 Troutman explains that artificial intelligence and machine learning have changed how the world operates in complex ways. Those impacts aren’t uniformly positive or equitable. Built by people, these technologies can include discriminatory biases that can impact how people are treated and cared for.

“It is so exciting to see a student who is such a strong scientist doing work that has extensive applications in everything from how banks determine home loan acceptance to recidivism rates for prisoners of color,” says Householder.

At UMBC, Troutman works alongside James Foulds, assistant professor of information systems. He has also completed research experiences at Rutgers University and the University of California, Berkeley, and is passionate about using his work to improve society.

“Receiving the Barry Goldwater Scholarship provides me with a stronger sense of confidence in my ability to research topics that have a significant impact on all people,” he says. “Being a Goldwater Scholar reminds me that I will always and forever be a curious scientist.”

Outside of the classroom, Troutman has been involved with UMBC’s chapter of the National Society of Black Engineers (NSBE), where he serves as the conference planning chair. UMBC’s NSBE chapter supports the NSBE Jr. chapter in Howard County. Troutman and the chapter support middle school and high school students through tutoring, workshops, tours, and other activities. He also helps Baltimore City College students prepare for the SATs.

Support from the UMBC community, including fellow students applying for the Goldwater, has been important to Troutman throughout the process. “Dr. Householder has been pivotal in encouraging me to apply for scholarships like the Goldwater,” he shares. He adds that the Honors College and Meyerhoff Scholars Program encouraged him to apply for the scholarship and helped him refine his career goals.

The application process for the Goldwater Scholarship enabled Troutman to push himself beyond his comfort zone and what he thought he could achieve. “Eventually, after I got comfortable with my uncertainty, I understood that I had nothing to lose. It is better to try and not win than not try at all,” he says, adding, “When one UMBC student wins, I think we all win. And when three students win, that says something powerful about UMBC.”

Dominique Brooks: Developmental biology research and developing as a researcher

Dominique Brooks developed an interest in genes from a young age. She shares that growing up as a light-skinned African American child, she felt that she was treated differently than her mostly dark-skinned classmates in primary school. She wondered about how genes worked and how that physical difference, which impacted her experience in school and in her community, came to be. 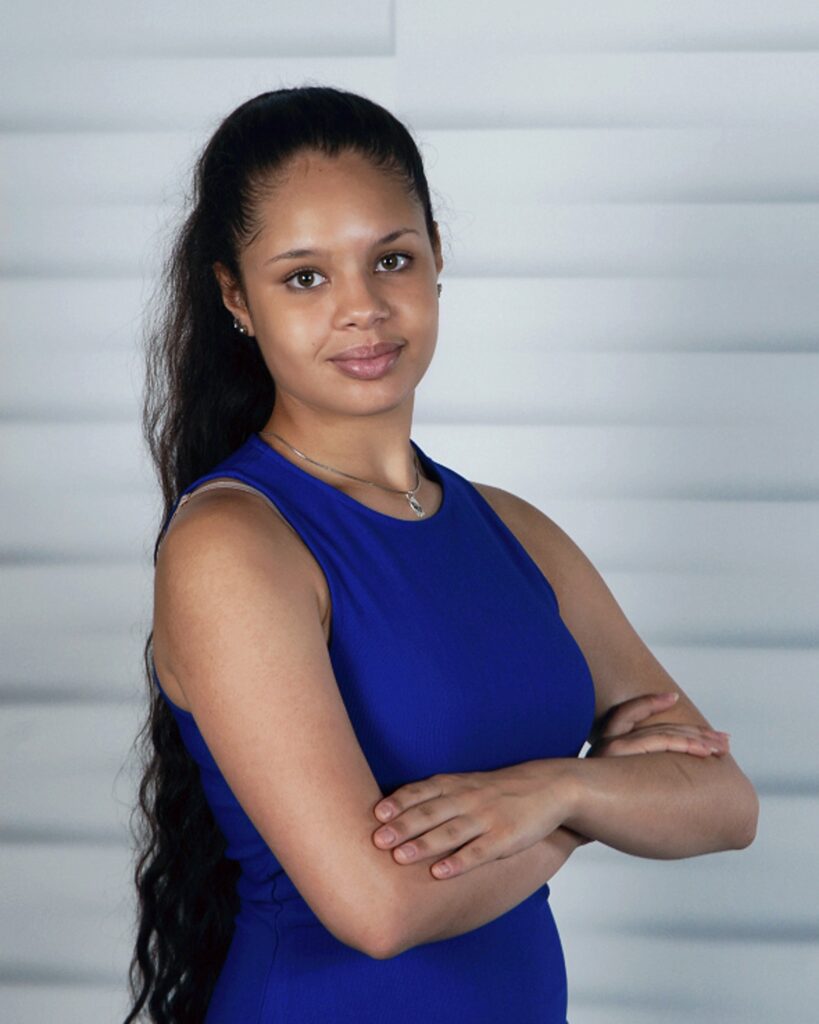 At UMBC, Brooks’s curiosity about genes and gene expression led her to the developmental biology lab of Rachel Brewster, professor of biological sciences. She has worked with Brewster for the last two years and intends to earn a Ph.D. in genetics. Her goal is to launch a career as a researcher in gene therapy or genetic engineering.

“My mentors, Dr. Brewster and UMBC graduate student Maki Negesse, push me to exceed beyond my own expectations,” she shares. “They challenge me to take on various projects while encouraging me to overcome moments of failure in the lab.”

“My peers will forever keep me motivated and focused on achieving my academic and career goals,” Brooks says. “I would also like to thank the staff members of these programs for caring about my future and providing a nurturing environment for me to seek guidance.”

Brooks has received awards for her research posters at the Annual Biomedical Research Conference for Minority Students and UMBC’s Undergraduate Research Symposium in the Chemical and Biological Sciences. She is also highly engaged in leadership, service, and mentoring through several organizations.

Brooks serves as a student justice in UMBC’s Office of Student Conduct and Community Standards and tutors for UMBC’s introductory biology courses. She also volunteers with the Global Brigades international service organization and the student-led STAR STEM outreach program.

When selecting potential Goldwater Scholar candidates, “Dominique emerged because of her strong academic record, impressive research, international service, and community engagement,” Householder says. “She is a STEM leader who will definitely go on to give back to the community and represent Goldwater, and UMBC, well.”

Brooks is already successful by any measure. But “being named a Goldwater Scholar signifies my potential to become a successful researcher in the STEM field,” she says, “which has given me confidence in my ability to be a leader in the field of genetics.”

Olumide Fagboyegun came to UMBC after graduating from Anne Arundel Community College as its valedictorian in 2018, and has focused his research on how the brain works.

Fagboyegun has worked with both Erin Green, assistant professor of biological sciences at UMBC, and John Cirrito, associate professor of neurology at Washington University in St. Louis (WashU). Doing research has fueled his desire to pursue basic science on brain function, in hopes of contributing to improved therapies for neurological disorders such as Parkinson’s and Alzheimer’s diseases.

Through research and the other opportunities he has pursued, Fagboyegun has also always kept top of mind supporting other underrepresented students in STEM. He shares that as an African American, he is all too familiar with the challenges that underrepresented minority students can face in STEM and in broader U.S. culture.

Fagboyegun talks about struggling with impostor syndrome, but the research he has done at UMBC and WashU has helped build his confidence. Now, he wants to pass that on to others through his career as a researcher and mentor—and he’s already putting that plan into action.

Fagboyegun served as a STEM Ambassador and supplemental instruction leader for general chemistry at Anne Arundel Community College. He participates in the STAR STEM outreach program at UMBC. He is also a member of the Sigma Lambda Alpha Honor Society, a Meyerhoff and MARC U*STAR Scholar, and part of the LSAMP program.

Participating in formal and informal mentorship roles “gave me a significant appreciation for mentorship and the influence a single individual can have on a person’s success,” Fagboyegun shares. “I’ve rarely felt greater joy than when students would email me or come to me in person talking about their success on an exam or their interest in science.”

With the Goldwater Scholarship, Fagboyegun is well-aware of his capacity to serve as a role model for other underrepresented minority students in STEM, and especially transfer students from all backgrounds. “This [scholarship] is a sign to other community college transfer students that such an accomplishment is definitely within reach,” he says, “and that UMBC has the ability to help them achieve it.”

“All of these individuals have been instrumental in helping me understand that I have the ability to pursue whatever goals I set my mind to,” Fagboyegun shares. “They’ve given me opportunities to grow and succeed, and have helped me paint an image of the kind of mentor I will tirelessly work to become.”

From artificial intelligence to human brain function and development, undergraduate scholars at UMBC make meaningful contributions to research. With support from mentors across campus, and now as Goldwater Scholars, Troutman, Brooks, and Fagboyegun will continue to make scientific advances.

Just as importantly, they will also advance the cultures of their disciplines to be more inclusive. They aim to produce a ripple effect, encouraging future talented students from underrepresented groups to pursue STEM research careers.