IMPORTANT: You are using an older version of Other that may not be supported in the future. Upgrade Now
UMBC is open, with most employees working remotely. Campus building access is restricted to those approved to work, live, and take classes on campus this fall.
Classic
College of Engineering and Information Technology
Institutional Group • 73 people
0

There is an essential resource constantly flowing beneath our feet: groundwater. Urban denizens may not think about it often, or at all, because they don’t rely on wells, “but it’s still there,” says hydrologist Claire Welty, and it’s critical to understanding the health of urban ecosystems.

Welty is director of UMBC’s Center for Urban Environmental Research and Education (CUERE) and a professor of chemical, biochemical, and environmental engineering. Groundwater is just one piece of a complicated puzzle that she and her team will work to put together over the next five years. A $4.8 million Critical Zone Collaborative Network grant from the National Science Foundation will make the large-scale project possible. The grant will support researchers at UMBC and eight other institutions that are part of the UMBC-led Urban Critical Zone Cluster.

Welty’s team will explore Earth’s critical zone, which extends from the tops of trees to the base of weathered bedrock, in urban centers along the Eastern Seaboard. In particular, they’re interested in how natural, geological processes occurring below the Earth’s surface and human-driven processes interact. Human influences include road salt application, polluted stormwater runoff, and soil-disturbing construction. These factors can all significantly influence urban water quality, water chemistry, and weathering processes.

Most Critical Zone grants are for work in more pristine wilderness areas, because the added effects of urban processes make the research more complicated. But, Welty says, “that’s the most interesting part.” 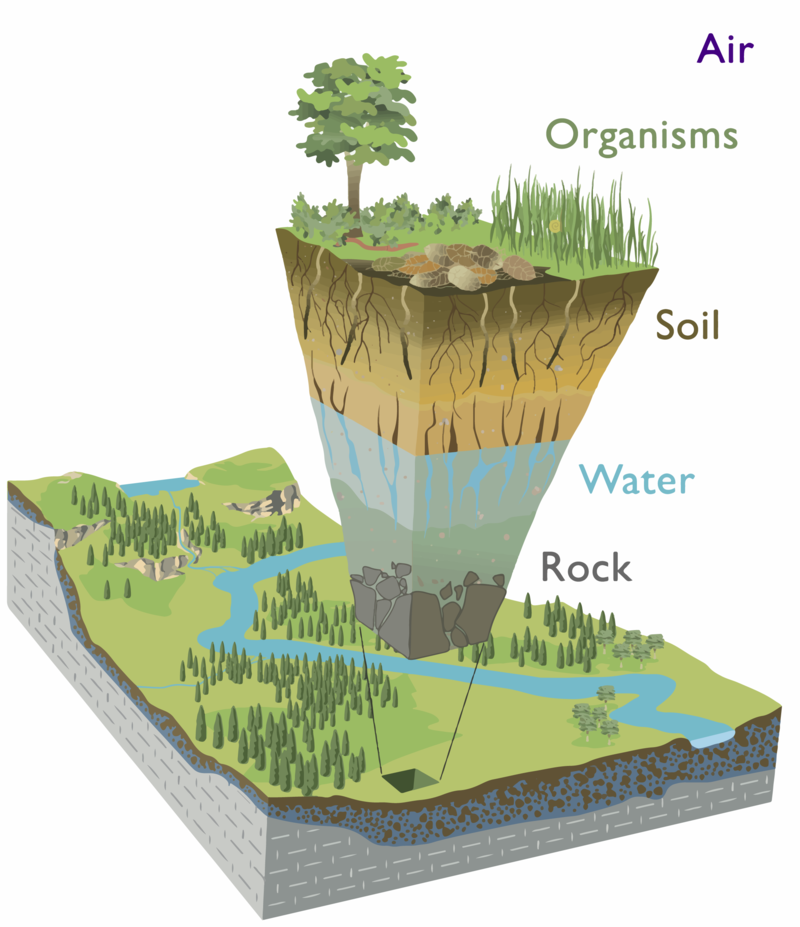 The Earth’s critical zone extends from the treetops down to bedrock below ground. Image by the National Science Foundation.

Focus on the Fall Zone

The research will take place in four East Coast cities: Philadelphia, Baltimore, Washington, and Raleigh. The researchers strategically selected these urban centers because they align in a north-to-south corridor along what geologists call the “Fall Zone.” The Fall Zone exists at the transition from the Piedmont to the Coastal Plain, and is an area of intense interest for geologists.

“We think of this landscape as ancient, but recent research has led to a different understanding about how the Fall Zone in our region has evolved,” says geomorphologist Andrew Miller, UMBCprofessor of geography and environmental systems and a collaborator on the new grant. Glaciers to the region’s north played a role, and “human activity has also caused profound changes,” Miller says. “All of this forms the background for the work we are planning to do on this project.”

Miller (left) and Welty in Catonsville at one of their research field sites. Photo by Victor Fulda.

Philadelphia to Raleigh: An urban corridor

The Fall Zone’s unique topography made it a natural place for some of the first American cities to emerge. Dramatic elevation changes characterize the Fall Zone, “so that’s where waterfalls formed, providing hydropower, so mills were set up,” Welty explains. Population centers grew up around the mills. Elevation changes at the Fall Zone boundary also limited water transport further inland, making it the natural place to build port cities. Today’s I-95 corridor links these urban centers.

The north-south corridor also gives the researchers an opportunity to examine how climate affects the movement of substances, such as sediment and dissolved materials, through the natural and built environments. Natural and human-introduced substances can affect everything from water quality to how quickly the bedrock wears away over time.

Of the four cities, Raleigh is distinct in ways that offer unique opportunities. As a younger city, it’s laid out differently. It may also have newer water, sewer, and other systems that could affect its underground properties in ways that differ from older, industrial cities like Baltimore and Philadelphia. 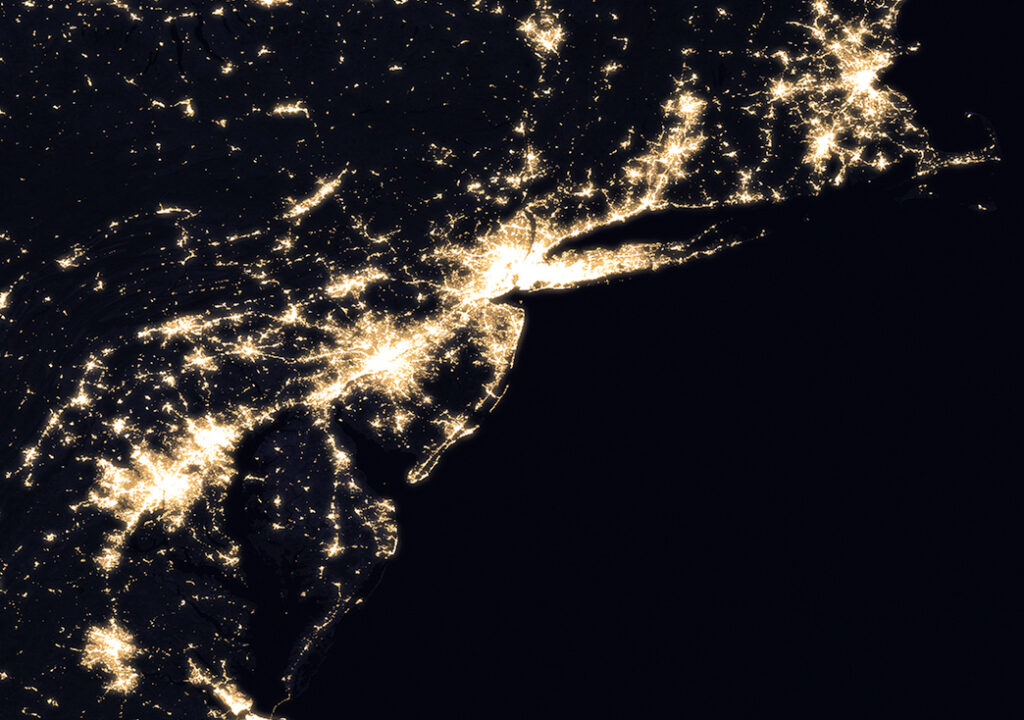 Baltimore, in particular, is well-suited to host this research, because scientists have collected environmental data on the region for over twenty years through the Baltimore Ecosystem Study Long-Term Ecological Research Project (BES). The BES team has installed scientific instruments all over the region. Students, faculty, and sensors have been recording data consistently for decades, painting a picture of Baltimore’s watershed, ecology, and social issues related to the environment.

However, “the subsurface has for the most part been ignored,” Welty says. With funding from other sources, she and her field assistants have drilled 35 monitoring  wells—but there’s more to be learned.

“We’ve got all this incredible science that’s been going on for 20 years of the BES,” Welty says. With the Critical Zone grant, “Now we want to look at the subsurface to complement all the data and information and instrumentation—you name it, we have it,” Welty says. “We think it’s really important to marry these two together.”

In addition to adding more and different data to an already huge archive, the Baltimore-based team also plans to leverage their existing data in new ways. “We’re going to use stream chemistry as a window into the subsurface,” Welty says. The researchers will also examine land use patterns and analyze bedrock and soil cores. Tools that act like an x-ray or MRI will enable them to visualize the structure and properties of the subsurface that are impossible to observe directly.

Urban groundwater processes fascinate Welty. She’s driven by a fundamental desire to better understand what’s going on underneath cities in the Fall Zone. And there are practical reasons why this work is important, too.

“At UMBC, we’re always interested in informing policy with the scientific projects we do,” she says. “We have strong relationships with partners in Baltimore, and folks in the other cities do as well. They pay attention to what we do.”

Those relationships work in both directions. Sometimes the research informs new policies around development, water treatment, or salt use. Other times, questions from regional leaders inspire additional research, including student projects.

Some public concerns have involved hazards to the urban drinking water supply and salinization of streams, which could be detrimental to wildlife. “We’re making connections and providing a foundation of knowledge,” Welty says, so policymakers can make decisions grounded in science.

In addition, Alan Berkowitz from the Cary Institute is on the team to help bring these important ideas to K-12 students. Berkowitz will work with the researchers to develop an Earth science module for local schools, which will eventually be available to educators nationwide. Berkowitz will also work with the team to develop a citizen science program focused on the urban critical zone theme.

“Alan has his ear to the ground on what the schools are interested in, and he knows how to make that translation from the scientific project to this kind of outreach,” Welty says. This work will bring the project full circle, inspiring another generation of minds to explore the world beneath their feet.

Banner image: Claire Welty (left) and Andrew Miller at a field research site in Catonsville. The site is a buried stream that doubles as a storm drain and is part of a restoration project. Photo by Victor Fulda, an engineering technician in UMBC’s chemical, biochemical, and environmental engineering department.