IMPORTANT: You are using an older version of Other that may not be supported in the future. Upgrade Now
UMBC campuses are closed, but courses are now online and employees are working remotely.
Classic
Sustainability Matters at UMBC
Institutional Group • 650 people
4
IMPORTANT

News Round Up: Sustainability in the Retriever Weekly

The program is straightforward: offices are encouraged to become “green office certified” by meeting a number of requirements on a sustainability checklist found online...The online checklist contains a list of suggestions which bring an office one step closer to becoming certified for every check obtained... The goal is to get at least 26 checks on the list. Ways to save energy and become a green office include using the auto-sleep function on computers (which saves $30 a year in electricity) and unplugging electronics when not in use.

Though this program is geared towards faculty offices, it can also teach students how to live more sustainably. Tanvi Gadhia, the environmental sustainability coordinator and a key player in developing Sustainability Matters’ Green Office Program, stresses the importance of adopting a green lifestyle and how to do so. “One of the best ways to adopt a green lifestyle is to set up defaults in your daily routine at work and home,” said Gadhia. “Once you have adopted conservation personally, it’s also important to encourage your family, roommates and/or colleagues to adopt these changes as well.”

These changes are important because of the bigger picture they fit into. “It’s also important that we promote systemic change,” said Gadhia. “This may be through policies, infrastructure or teaching and research, but creating changes in our system to progress towards resource conservation, efficiency and renewables is the best way to make greener lifestyles that we can all adopt with ease.”

Read the rest of the article at: http://retrieverweekly.umbc.edu/go-green/

“[The Real Food Challenge] is a national organization with this thing called the real food commitment and it’s a document that … binds the university into doing 20 percent real food by 2020 and that’s pretty much our same goal,” said Maura Smith, director of Just Food UMBC. “It’s the idea of shifting dining services’ purchasing power towards real food which we define as local, organic, humane and fair.”'

Read the rest of the article at: http://retrieverweekly.umbc.edu/just-food-umbc-struggles-chartwells-sustainable-food/

...The area surrounding the apartments will also be improved through this construction. According to the site plans, the landscape of the area will be enhanced to create a more sustainable environment. Damaged trees will be removed, new plant beds and micro-bio retention areas will be generated and over 45 plant species will be introduced to the area. 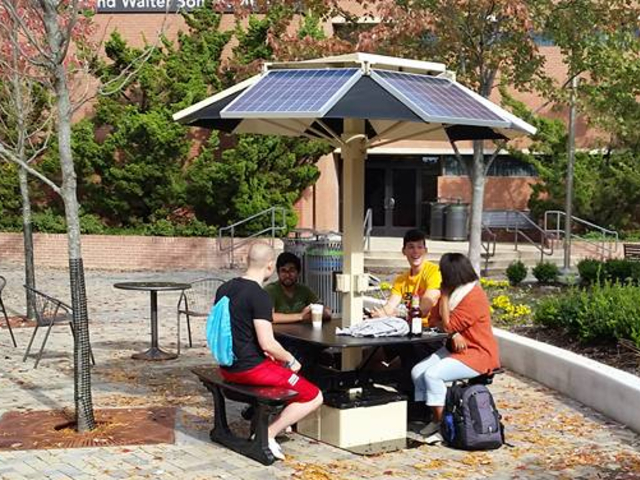 Andrew Brow, fifth year student studying mechanical engineering with a minor in entrepreneurship and member of the SOLARetrievers, was aware of the costly idea but believes, “if we could show people a direct link to using regular solar energy instead of conventional power, we might be able to change the way people think about getting their energy in the future.”

Students have been seen making use of the Solar-Power Doks around campus. Laura Arvin, a freshman Biology major, expressed her interest in them saying, “I think the solar paneled tables are a great way to show students how we can use renewable energy sources, and they’re also a pretty convenient way to charge my phone while I’m working outside.”