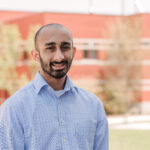 “I’m an advocate for people in different majors meeting each other because in the real world the biggest problems are interdisciplinary. Speaking with people with different interests is a great way to broaden your horizons.”

Arjun Trivedi ‘22, M30, mechanical engineering, is passionate about engineering, computing, and connecting with people outside of his field, who have different perspectives. He wants to learn about what drives them, how they think about the world, and if they have advice that could apply to his experience. “Finding those connections and being able to take advice from everyone around you helps you grow,” he explains. 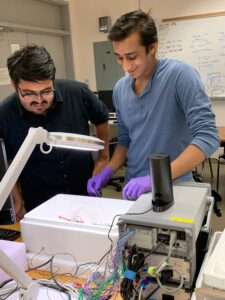 As a leader of UMBC’s chapter of Tau Beta Pi, the nation’s oldest engineering honor society, Trivedi says that it was rewarding to be involved in the planning and execution of this year’s COEIT Engineering and Computing Week, held in February. The event offered students, faculty, staff, and alumni the opportunity to network and learn from each other.

Trivedi is a Meyerhoff Scholar, and shares that the sense of community and support that he receives from his peers and mentors is meaningful. Connections with other students in the program have led him to become involved in lab research and develop interests beyond his major. It was one of his peers who suggested to Trivedi that he consider minoring in computer science, given his interest in robotics.

That nudge set him on the path to the research that he completed with Ankit Goel, assistant professor of mechanical engineering. Keith Harmon, director of the Meyerhoff Scholars Program, also put Trivedi in touch with contacts at the Johns Hopkins University Applied Physics Lab to explore his career options. Trivedi will soon begin a maritime robotics position at the globally renowned research center.