St. Patrick’s Day might not be known as a day celebrating love and lifelong devotion, and True Grit’s may not come to mind as the most romantic place to eat, but for Marcie and David Zisow the booth in UMBC’s dining hall was just perfect.

The Zisows will celebrate their 50th wedding anniversary later this year, but on March 17, 2022, the couple took the time to mark the 53rd anniversary of their first conversation. “We’ve always celebrated both dates,” say Marcie and David, who first spoke to each other at a shared table in UMBC’s commissary (predating True Grit’s by several decades). She was eating a tuna sandwich packed by her mother, and he had a homemade PB&J. Marcie ’72, French, M.A. ’84, instructional development systems, a retired educator, and David ‘71, mathematics, a retired OB-GYN, laugh now at how that day played out.

“We are Jewish,” says Marcie, “but my mother, she always wanted us to wear green on St. Patrick’s Day. So I put on this ugly green plaid skirt. I really did look ugly, but that’s all I had that was green.” David admits that he was looking for a date to the mixer that Saturday night as a rebound from his previous UMBC girlfriend.

An undated photo of David and Marcie Zisow, provided by the family.

The conversation did not start off well. As Marcie retells it, “At one o’clock the whole table gets up to go to their next class, and he stays there. He was making me nervous. He starts talking, and the next thing I know, he’s asking me to the dance.” Marcie knew of David, a pre-med student who had recently starred in UMBC’s musical production of “Stop the World, I Want to Get Off.” (“She didn’t even come see it,” David says as an aside. “I didn’t have a ride!” responds Marcie in what must be a 53-year-old conversation.)

Marcie says now, in retrospect, she surprised herself by being brutally honest with David. “What you have to understand is, I grew up in a Jewish community, in a Jewish household. I never had to say anything to anybody about being Jewish, we all understood. So I told him, ‘I don’t date people who aren’t Jewish.'” David immediately erased her fears but sharing his own Jewish heritage with her. Marcie said she didn’t waste a minute, but ran to the nearest payphone to call the girlfriend she was supposed to ride to the mixer with to cancel their plans.

Looking back, David can’t believe their luck. “The dance was an amazing evening. We just had such a good time together. We were so in tune with one another. I knew she was the one.”

The Zisows have been telling this tale to their four grown children for so long, that Jamie Silverman, their youngest, can tell it by heart as well. She was inspired to create a surprise celebration for her parents, recreating their meet-cute, albeit at True Grits and with slightly upgraded fare from their home-brought sandwiches. UMBC Dining immediately offered up their services, including baking an anniversary cake, playing music from the ’60s and ’70s, and creating a slideshow of Zisow pictures to show on the screens of the dining hall. 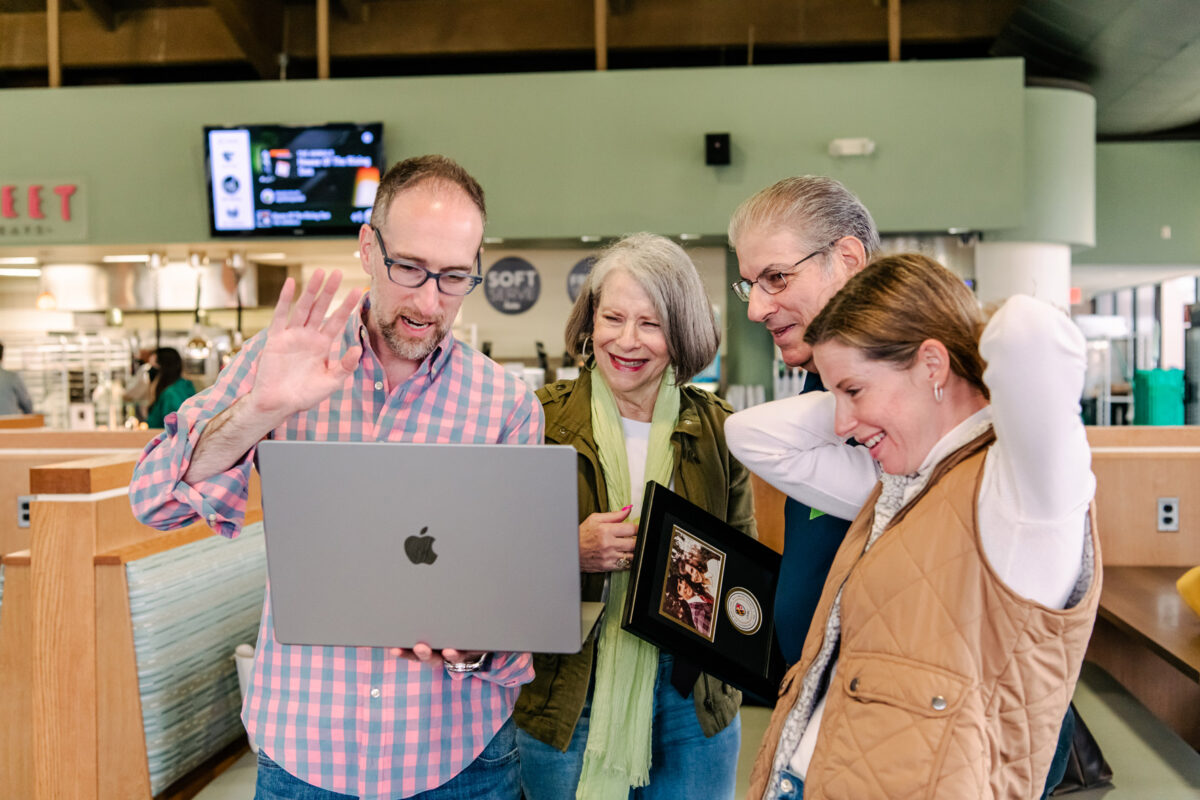 Marcie and David, with their children Brad and Jamie in True Grit’s, chatting with other family members on Zoom.

Silverman eventually had to reveal to her parents the big surprise before she drove them to campus. Arriving during a spring shower didn’t dampen their enthusiasm for the date though, and both alums had big smiles on their faces when they saw the lunch set up.

The Zisows reminisce fondly on UMBC, not just for allowing them to meet, but because of how formative their time here was. “This is an old story,” says David. “When you’re the son of immigrants, you’re kind of an outsider. You’re raised differently. You have different attitudes. When I came to UMBC, I found a group of people that were completely accepting. So in the theater group, I was the med-school nerd. But that was okay.”

For Marcie, UMBC left her with lifelong friendships, but also with a career she couldn’t have imagined. When she started college, she wanted to be a hairdresser, but her father strongly encouraged her to apply for a teaching scholarship that would require two years of teaching following graduation. “I didn’t want to be a teacher because my sister was a teacher, but then it turned out that I loved it. I taught for over 20 years,” she says. Eventually Marcie returned to UMBC to earn her master’s in 1984.

Seated at a booth in the dining hall, enjoying chicken Caesar salads while Zooming with their two children who couldn’t make the in-person event, the Zisows are feeling pretty lucky. “We just took a chance,” says David. “I just knew from that moment that she was the girl for me. And then a couple weeks later I asked her to go steady, and the rest is history, as they say.”

All photos by Marlayna Demond ’11, unless otherwise noted.