Global flashpoints, including the Russian invasion of Ukraine and Chinese actions in Xinjiang, share a common background: a previous history of invasion and occupation.

The northwestern region of Xinjiang, for example, became an autonomous region under Chinese rule in 1955. Officially known as the Xinjiang Uyghur Autonomous Region, this mainly Turkic, Muslim area is viewed by the Chinese as a possible threat to China’s security and territorial integrity.

The government in Beijing encouraged mass migration of Han Chinese into Xinjiang, which fomented resentment among the local Uyghur people. After clashes in 2009 that caused more than 200 deaths and a 2013 terrorist attack in Tiananmen Square, the Chinese cracked down with aggressive policing and extreme surveillance. Hundreds of thousands of Uyghurs have been jailed, more than 1 million detained in “reeducation camps,” and China has been accused of genocide.

These tactics of invasion and occupation can also be seen in the way 250,000 Russians moved to Crimea after it was annexed in 2014.

Academics sometimes refer to these tactics as “settler colonialism.” As a strategy of subjugation, it has many historical precedents and it provides an important lens for understanding geopolitics in various parts of today’s world.

History is studded with empires. Broadly speaking, there are two types.

British rule in India exemplifies an empire of control, where imperialists extract wealth and resources without large-scale emigration from the colonizing country. The importation of the wealth of India, especially its textiles, was an essential requirement of Britain’s Industrial Revolution.

There are also empires of settlement that occupy colonial territories by moving in large numbers of settlers. Across the world, especially in the lightly settled open grasslands of Australia and the Americas, the original inhabitants were displaced and marginalized as their homeland was taken by treaty, sale, guile and theft.

The process often involved brute force or ethnic cleansing as land was seized and handed over to immigrants. In Australia, the British justified colonization by declaring the continent “terra nullius” – that is, empty and uninhabited.

Settler colonies were used to safeguard the edges of empires. A policy used by the Qing dynasty (1644-1912) that moved ethnic Chinese settlers into recently captured territory is still used today in Tibet and Xinjiang. Both imperial Russia and the former Soviet Union encouraged citizens to settle border regions, so today at least 20% of the population of Ukraine is ethnic Russian. 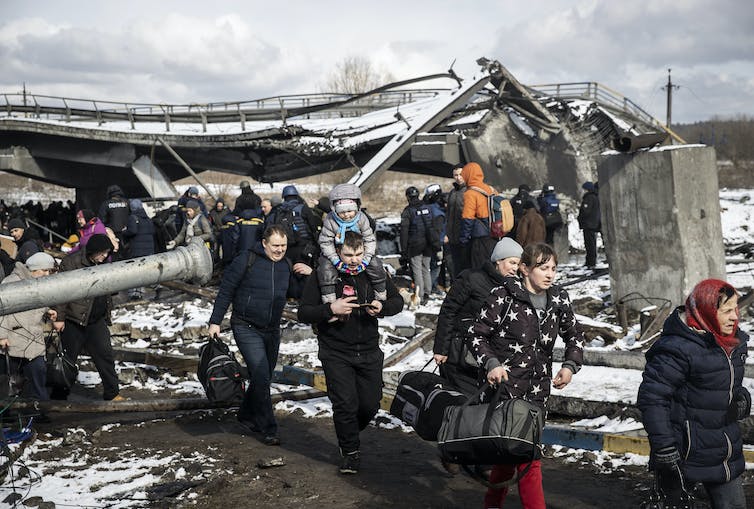 Civilians continue to flee from Irpin because of ongoing Russian attacks in Irpin, Ukraine on March 8, 2022. Emin Sansar/Anadolu Agency via Getty Images

Many settler empires rose in the 18th and 19th centuries and continued well into the 20th century. In Africa, for example, settler societies were established by the British in Kenya, the French in Algeria and the Dutch in South Africa.

The colonists who moved in, often in large numbers, were typically white Europeans who took control over the land, lives and economy of Indigenous peoples. There were exceptions, though. In Liberia, Black Americans settled in the land of Black Africans; in Israel, mainly Jewish immigrants took over the land of Arab populations; and in China, the majority Han people moved into non-Han areas.

My research into the interactions between Indigenous people and European settlers in North America and resistance to cultural integration by an Indigenous art movement in central Australia has offered me a different way to view history. Looking at the past through a lens of settler colonialism substantially changes how we view histories of many countries, including Australia, Canada, New Zealand, South Africa and the U.S.

Most settler societies are steeped in a prejudiced history in which racial categories define who has power. One strategy has been to make full citizenship available only to settlers and their offspring. Some of the more extreme examples include racialized rule in South Africa that created brutal apartheid and traumatized generations of aboriginal Australians.

There is also a long history of child abuse, with Indigenous children taken from their homes to be assimilated into settler society. Emerging evidence of these practices, including those experienced by Indigenous children in Canada’s residential schools, is helping to rewrite the history books from the Indigenous – rather than just from the settler – perspective.

By restricting immigration, some countries – including Australia, Canada and the U.S., among others – have tried to maintain their racial or ethnic identities and their power. Many of these policies were weakened only in recent years. 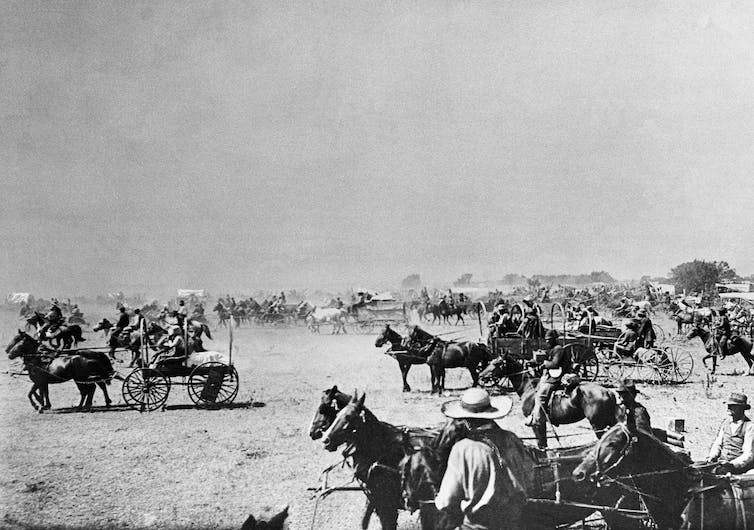 Settlers raced into what was then known as ‘Indian Territory’ as the sound of a gunshot opened the area to white settlement on Sept. 16, 1893. The land rush marked the early beginnings of the state of Oklahoma. AP Photo/A.A. Forbes

Land is a key issue, as Indigenous groups continue to pursue land claims and resist land grabs. From ongoing Mapuche claims in Chile to aboriginal Australians’ successful campaign to overturn the legality of “terra nullius,” land seized by settlers is being disputed.

New facts and greater awareness of the racist nature of settler societies are challenging the triumphalist view of progress. New information is providing a darker understanding of the impact of settler colonialism on Indigenous peoples, including ethnic genocide and the devastating impacts of the loss of both land and cultural identity.

This isn’t just history. Unequal, brutal treatment of settlers and indigenous peoples continues in today’s settler societies, not least of all in Xinjiang and in Ukraine.