Charting His Own Map for Success

Donovin Acaro Smith ’21, geography and environmental studies, was 11 years old when he did something bold, but not out of the ordinary for him. It was a sunny day. His school was taking a class trip to the local swimming pool, and parents were welcome to join. Smith’s mother Sonia, thought there was a problem. As far as she knew, her son didn’t know how to swim; he however, disagreed. Along with some buddies, he sprinted and leaped into the pool water, as his mom screamed, “Noooooooo, Donovin!”

But surprisingly, he wasn’t drowning, or even floating. He was swimming. It was a concerning, yet proud moment for his doting mother.

As he grew older, Smith would find himself surviving other sink and swim moments in life—two gunshot wounds as a teenager left him with anxiety and PTSD that would stop him from leaving his house for a year. And just last year, he overcame another obstacle he previously thought insurmountable: graduating from college. 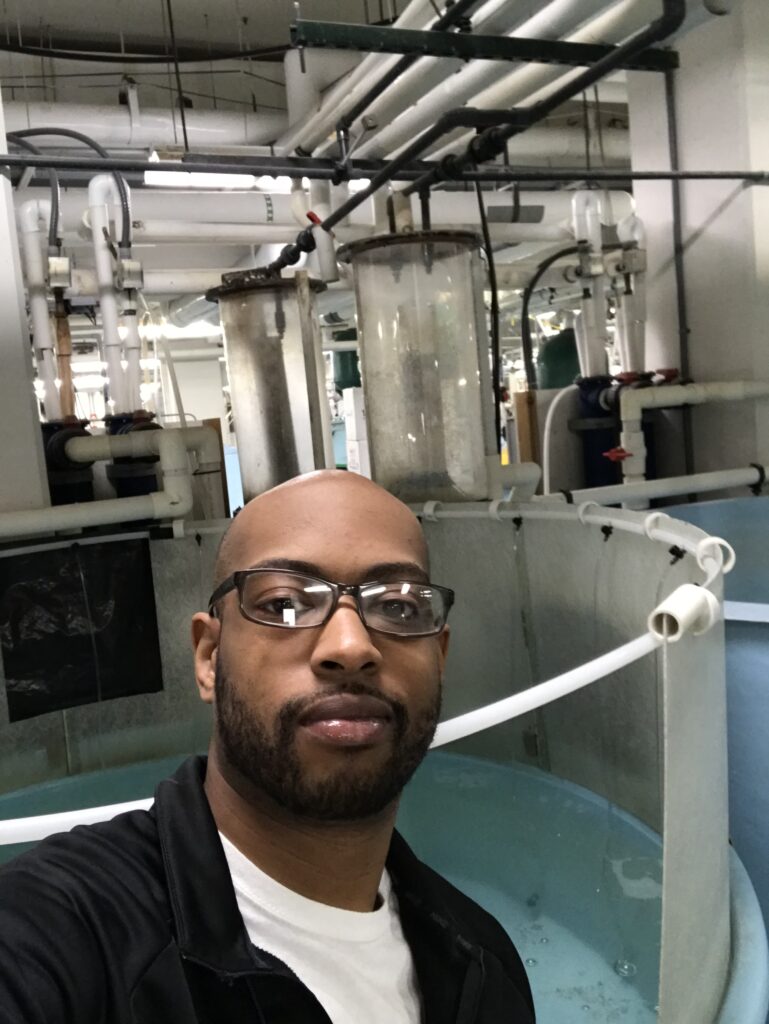 Smith while interning at the Institute of Marine and Environmental Technology (IMET).

In his late 20s, Smith followed in his maternal grandmother’s footsteps and pursued a new life focused around one goal: getting a four-year college degree. By the time he was 32, and after five internships in his field, he had a diploma in his hand and an unstoppable urge to keep moving forward.

Through his internships and connections in the Retriever Learning Center and Student Disability Services, Smith developed invaluable relationships with the people around him.

Matthew Baker, professor of geography and environmental systems, and associate dean of the College of Arts, Humanities, and Social Sciences, and Smith’s mentor and teacher says, “given the challenges he faced at the outset of his undergraduate program at UMBC, what he’s achieved is probably one of the greatest success stories that I’ve experienced in my 20 years of instruction.”

Even though he grew up just 20 minutes away from UMBC, the institution wasn’t on Smith’s radar as a young man.

At 18, when some kids were moving into their college dorm rooms, Smith told his mom he was heading to a cookout with some friends, just minutes away from his grandmother’s place. Later that same night, he called to say that he was on his way to the hospital. He’d been shot twice, once in his left thigh, and once in his lower ribcage.

The pain didn’t hit him right away, perhaps because gunshots weren’t new to Smith—when he was a child, he witnessed his father being shot.

“Not to sound like a tough guy, but I guess those experiences from my dad numbed me—he was set up when I was four. Somebody came in and shot him and he fell off the balcony and ever since then he’s been a parapelegic. So when it happened to me,” says Smith, “it didn’t really hurt. I was just trying to control my breathing so I could make it to the hospital.”

Even after surviving his gunshot wounds, Smith says he struggled to find purpose and meaning in his life. Smith’s mother recalls, “after Donovin got shot, for like a year he wouldn’t go out. He stayed in so much he ended up having a vitamin D deficiency.”

“Whatever lifestyle [my father] indulged in at the time, I saw those things firsthand,” says Smith of his teenage years. “I guess once you keep seeing the same things over and over, it just sorta keeps resonating in you, so when I got to that age, I wanted to do the same thing,” even though his father frequently warned him away from it. 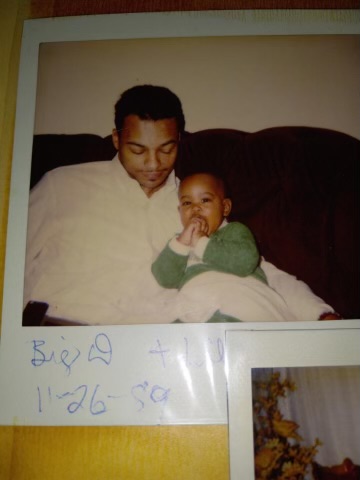 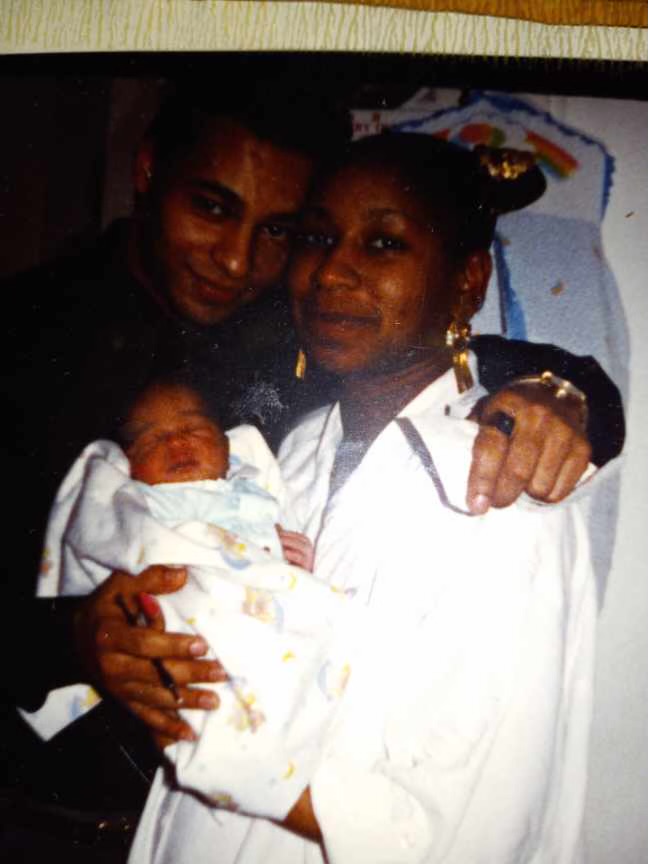 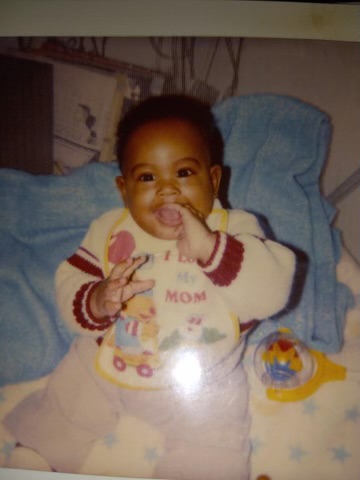 Family photos from Smith’s childhood. All photos courtesy of Smith unless otherwise noted.

“Some things I was doing I didn’t feel right about, or I felt bad about. Maybe because of those circumstances, I was confused about what it means to be a human being,” he says.

But he kept the right people around him from the start. His mother’s positive influence, and the love and support of other family members helped Smith through his most turbulent years.

A new mindset for a new environment

Smith wishes his interest in academics had started in high school. “I remember I used to walk into class, only thinking about getting through the day, I didn’t care what I learned about,” he says. “When I finally got to college, and I was in chemistry class, I could see how excited those students were to be in there. I just thought to myself, ‘Wow man, this is foreign to me.’ I wish I developed that attitude way earlier.”

At first, he only saw higher education as a way to please his family, but eventually it became Smith’s own passion. When he graduated from high school, Smith enrolled in the Community College of Baltimore County (CCBC), eventually earning an associate’s degree. He then applied to a few four year institutions. When he got into UMBC, he recalls his mother saying, “Wow Donovin! You gotta do it.”

“At first, I was just [going to college] to keep my mother and grandmother off my back, and to try and make my father happy, to make sure he knew that I’m grateful for some of the mistakes he made for me to be where I’m at. Then, when I started believing this was real, and not some kind of unrealistic reach or a joke, I knew I was doing it for myself, too,” says Smith.

A humble approach to learning

But before he got to that stage, he had to work to adapt to a new atmosphere and new environment. “The biggest obstacle to be honest, for me, was building up my self-esteem and feeling comfortable in my own skin. My first couple of years were rough. Like I might get a B or a C and then maybe like two D’s or an E,” shares Smith. “I was going to tutoring, I was trying. But I noticed when my self-esteem went up, my grades improved and I skyrocketed and I never looked back.”

The moment he started believing he could succeed at UMBC inversely began after failing GES 286, a mapping class. He retook the class a second time with a friend, and “I felt way more comfortable,” says Smith. “When I started excelling in that class, that’s when I started feeling like I could do it,” he says.

Smith meets with Baker on a recent visit to campus. Photos by Marlayna Demond ’11.

Smith says he regularly reached out to friends for help studying and found a private tutor through Student Disability Services (SDS). “The Retriever Learning Center is where I did the majority of my tutoring and it was really helpful. But having anxiety and PTSD, I had to get my questions off. I was trying to survive,” Smith says.

“But sometimes with so many students attending, there wasn’t enough time for me to get as much help as I wanted. Thankfully I was able to get accommodation from SDS who granted me an individual tutor which made a big difference.”

“One of the things that has impressed me about Donovin the entire time that he was here was his resilience,” says Baker in GES, “his ability to bounce back from challenges, his perseverance and his absolute, unwavering dedication towards reaching his goals and because of those things it was really easy to support him, and it became an obligation to see that he did well.”

Also helpful was Smith’s fearlessness in regards to asking questions.

“He was always really clear about why he was asking what he was asking, and what he was trying to understand,” says Baker. “I think he was also willing to be humble about what he was learning so that he didn’t let embarrassment get in the way of his learning. As a result he made remarkable progress.” 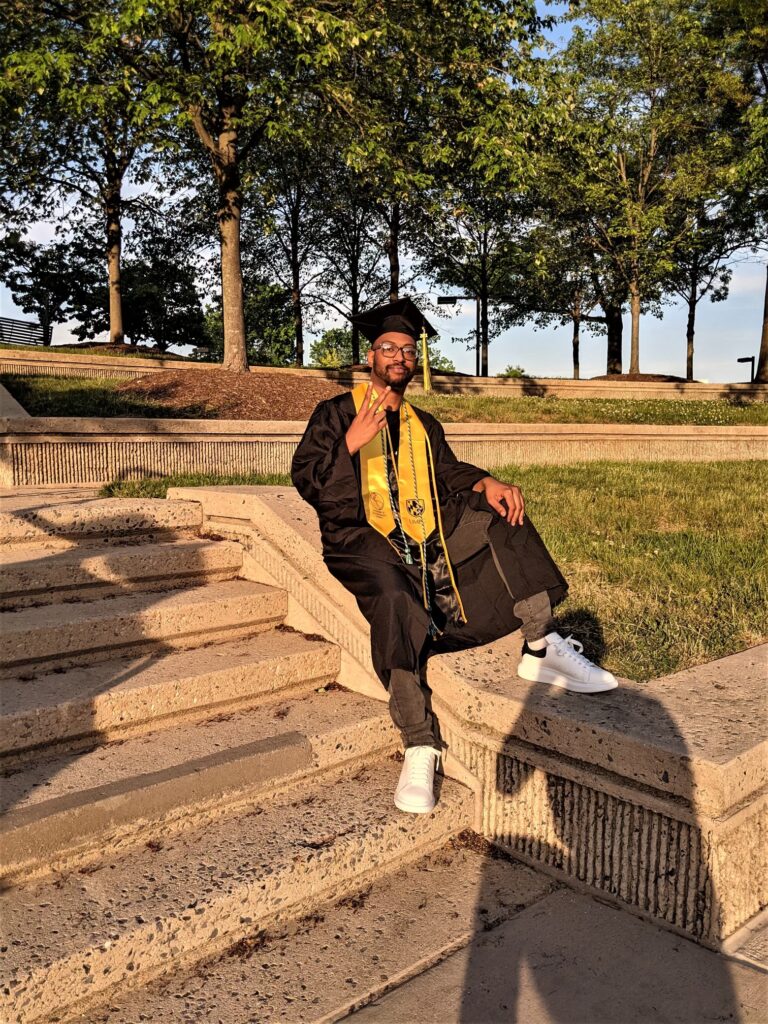 Interning his way up

Smith, who is currently looking for a position in the conservation and environmental management field, began mastering these skills in a series of five internships.

In his first, under the wing of Baker, he researched sediment pollution in the Patapsco River. He also worked as a lab technician at the Institute of Marine and Environmental Technology. His most recent internship before graduation was at the Smithsonian Environmental Research Center, looking at the environmental influences on barnacles.

“The most rewarding part for me was working next to and being close to doctors and biologists every day, asking them as many questions as I wanted so I could really learn from them,” says Smith. “It taught me that you have to keep building your skills, learning how to compile fragments of information that might coincide with one another,” he continues.

Today, Smith sees his graduation from UMBC as his life’s crowning achievement. He describes his educational experience as a microcosm of his life as a whole. “There was a point at UMBC where my grades were looking so bad that I was about to switch to community college and try to come back. One of my highlights was being able to turn that around and just survive the tough academic atmosphere,” says Smith, who credits his mom, Baker, his friends, and some of UMBC’s organizations who helped him succeed.

To anyone that finds themselves in a similar position to the one he was in before attending UMBC, Smith recommends perseverance: “Give yourself a chance, and time to grow on your own. Separate yourself from your friends and environment and try to look at life from as many positive angles as possible.”

Looking at her son’s achievements today, Smith’s mother Sonia says, “He’s on his way, he is on his way.”

Header image: Baker and Smith meet up on campus in 2022. Photo by Marlayna Demond ’11.