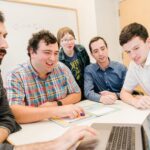 Two new papers from Can Ataca’s research group at UMBC set the stage for further advances in solar power and other renewable energy technologies. Daniel Wines, Ph.D. candidate in physics, led research using computational modeling to explain surprising properties of materials with potential for use in solar cells. Gracie Chaney, Ph.D. candidate in physics, led a project that used machine learning to characterize a new type of material that could improve lithium ion batteries.

Wines’s paper, published in Applied Materials and Interfaces, will make it easier to design the best material for certain technologies that require energy transfer, from solar cells to LEDs. A research group at Arizona State University led by Sefaattin Tongay had run experiments on a class of materials called perovskites, which have a crystal structure well-suited to a range of engineered materials. They are an attractive candidate for use in solar cells, but the group was struggling to interpret its results.

Tongay and graduate student Han Li, the lead author on the paper, thought Ataca’s group might be able to figure out what was happening by modeling their experiments. They were right. By running computational simulations, Wines was able to confirm the group’s findings and determine the underlying physics causing Li’s surprising observations.

Li was studying how perovskites performed under different amounts of physical pressure. Pressure can change how electrons move through a material, which in turn changes the ideal conditions for generating electricity. In solar cell applications, for example, pressure can affect which frequencies of light will most efficiently produce power when they strike the material.

“It’s all about tuning the structure for the sunlight spectrum,” says Ataca, assistant professor of physics. “You want to absorb at certain frequencies so that you will have the best efficiency if you were making a photovoltaic cell from this.”

Both Wines and Li found that when the perovskite took a one-dimensional form, where the molecules are bound together in a long line, the amount of energy required to initiate conduction decreased linearly as pressure increased. However, in two-dimensional perovskites, which look more like a flat plane, there was an initial decrease, and then at a certain level of pressure, the required energy increased again. That inflection point was what puzzled Li, and where the simulations at UMBC became crucial.

This portion of figure 1 from Wines’s paper shows the atomic structure of the perovskite he and colleagues studied in its one-dimensional (left) and two-dimensional forms.

Simulating the experiments allowed Wines to examine the structure of the perovskite crystals at each pressure level. He found that in one-dimensional perovskites, the primary structure stayed constant, but “stretched” as the pressure increased. However, in the two-dimensional perovskites, “there’s a critical point where there’s a phase transition, and there’s a certain rotation of some of the bonds and atoms,” Wines explains. That transition fundamentally changed the properties of the crystal, and explained the unusual observations.

Understanding why the properties changed at a molecular level will make it much easier to determine the best combination of structure and pressure for different applications of perovskite materials. While it might be possible to determine their properties with experiments alone, using computational simulations will make the discovery process much faster and less resource-intensive.

While Wines’s work may help develop solar cells that are more efficient at collecting the sun’s energy, Chaney’s research, also published in Applied Materials and Interfaces, looks at the next step—how to store that energy. “The sun doesn’t always shine, and sometimes it shines too much during the day and overwhelms the grid,” she says. “So we need something to store all that excess energy in the daytime and release it at night and on cloudy days. That’s why we need to improve batteries.”

TMDs usually take the form of a molecular sandwich: two chalcogens (elements from a column on the right side of the periodic table) surround an atom from the transition metal family (several columns in the center of the periodic table). These sandwiches can form a plane, called a monolayer, or the layers can be stacked on top of each other to form a 3D structure.

Typical TMDs have the same atom on the top and bottom of the sandwich. But Chaney’s study investigated “Janus” materials, which have a different element on each side. These materials are named after Janus, the two-faced god in Roman mythology. “It’s not a typical TMD, and that’s what makes this special,” Chaney says. Her study looked at six different combinations of top and bottom elements.

Narrowing the “circle of searching”

Chaney and Akram Ibrahim, another Ph.D. candidate in Ataca’s group, used machine learning to predict the properties of the different combinations. One key property was how tightly the lithium ions would bind to the material. That’s important, “because we want the lithium not to escape from the 2D material where we are storing it,” Ibrahim says. “So we are searching for materials that lithium binds to strongly.”

Using machine learning to find the best composition for battery materials “saves a lot of time and resources,” Ibrahim says. After using the model to identify high-potential materials, only then would the lab use more energy- and time-intensive methods to get an even more accurate and detailed understanding of the materials’ properties. By using the model, Ibrahim says, “we have narrowed down the circle of searching.”

“Something that was really interesting was that the lithium transport and the binding energy really depended on which side you looked at,” Chaney says. The machine learning model was able to predict those differences, suggesting it is useful for better understanding both Janus materials and traditional TMDs.

Using computational models to learn more about how these materials store and transport lithium ions can inform future experimental studies to improve battery efficiency. That information could guide advances in anything from solar power storage to electric vehicle range.

It may be some time before this research finds its way into solar panels or batteries. However, growing the fundamental understanding of how materials function – how they interact with light or store lithium ions – makes future technological advances possible.

“There’s being able to synthesize the material reliably, and then understanding the physics of the material itself and how you can tune the properties,” Wines says—which is where his and Chaney’s work is now. “Then, after that, implementing it into devices and testing the devices in the lab are the next steps” before technologies with the new material can be produced on a large scale.

Along the way, modeling and experiments complement each other, which is why collaborations like the one between the UMBC and Arizona State research groups are so valuable. “There’s a need for both kinds of research at every stage,” Wines says.