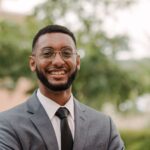 Joshua Slaughter ‘22, M30, has received the Marshall Scholarship, becoming the second student in UMBC history and the first in 29 years to be selected for the prestigious award. Slaughter is one 41 American students selected this year from institutions across the country for the Marshall Scholarship, which supports graduate study at institutions in the United Kingdom. He was also a finalist for the Rhodes Scholarship.

Slaughter, who is earning his degree in computer engineering, will pursue his Ph.D. in informatics at the University of Edinburgh. His goal is to advance equity in the developing field of personalized medicine.

“I am incredibly proud that, in the past four years, UMBC has produced finalists and awardees in some of the most competitive and prestigious international scholars programs, including both the Marshall and Rhodes,” says UMBC President Freeman Hrabowski. “Our rise on the global stage is continuing at a rapid pace thanks to our exceptional students, and the caring faculty and staff who support them.”

Support from students who have been there

One of the first things that Slaughter did when he found out that he was finalist for both awards was to text Naomi Mburu ‘18, M26, chemical engineering, who was the first UMBC student to be named a Rhodes Scholar. While Mburu was not allowed to offer guidance during the interview processes, she did offer more general words of encouragement.

“It is exciting to see the great strides UMBC has been making all over the world in recent years,” says Mburu. “Slaughter is an amazing and dedicated student who I had the pleasure of mentoring through Meyerhoff Summer Bridge, the Goldwater Scholarship, and now the Rhodes and Marshall interviews. I look forward to welcoming him to the UK next fall.”

In addition to being a Meyerhoff Scholar, Slaughter is a member of the UMBC Honors College and the U-RISE program, an undergraduate research program that prepares students from underrepresented groups to pursue a Ph.D. in the biomedical sciences. He is the president of UMBC’s chapter of the National Society of Black Engineers, and Tau Beta Pi, the honors society for engineering students.

Earlier this year, Slaughter was one of four UMBC students named Goldwater Scholars. The goal of the Barry Goldwater Scholarship and Excellence in Education Program is to provide the United States with “a continuing source of highly qualified scientists, mathematicians, and engineers” to move the nation forward.

Learning to research from researchers

Slaughter explains that it’s essential to diversify the field of machine learning. People of all backgrounds need to be involved in the development of algorithms, he says, to help produce algorithms that reflect the diversity of society and have equitable impacts.

His interest in research began when he was in high school. Slaughter connected with UMBC’s Matthew Fagan, assistant professor of geography and environmental systems, and began working in his lab several hours each week. While the focus of Slaughter’s research has shifted to computing, he says that Fagan provided important support that allowed him to see the impact that research can have on various communities.

When Slaughter came to UMBC, he took a class taught by Chuck LaBerge, professor of practice in CSEE. LaBerge went on to become one of Slaughter’s biggest supporters and mentors. He encouraged Slaughter and his classmates to examine real-world problems and envision success in engineering as using their skills and knowledge to create change in the world.

April Householder, director of undergraduate research and prestigious scholarships, says that UMBC students’ success with earning prestigious international scholarships is inspiring for many reasons, but she is particularly excited that there is now a community of Retrievers pursuing graduate studies in the U.K. who can be there for each other. “Mburu, Patterson, and Slaughter are sharing this experience together, and supporting one another at the next level,” she says.

Householder also notes that, like UMBC’s prior prestigious scholarship winners, Slaughter cares deeply about UMBC’s values of equity and of inclusive excellence. “Slaughter is committed to changing computational methods to improve healthcare, particularly in underserved populations,” she notes. “He is a deep critical thinker, and he examines how asking questions about identities like race, gender, and class can help combat the biases inherent in biomedical research.”

Looking ahead, Slaughter is eager to get to the University of Edinburgh, but he says that UMBC has played an essential role in his journey. “Receiving the Marshall is a testament to all of the people who have come before me, and the amazing support group and environment that UMBC is. The support at UMBC is unmatched,” Slaughter says.

“I don’t think I could have done this anywhere else,” he shares. “It speaks volumes to the inclusive community that UMBC has fostered over the past 30 years.”