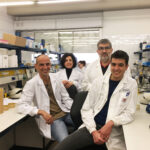 A protein produced by viral DNA is orchestrating the critical “SOS response” in a large group of bacterial species, according to a new study in Nucleic Acids Research co-led by Ivan Erill, professor of biological sciences at UMBC, and first author Miquel Sánchez-Osuna, a graduate student at Universitat Autònoma de Barcelona (UAB) whom Erill advises.

Their new results suggest the relationship between these bacteria and the viruses that infect them, called bacteriophages or simply “phages,” may go back more than 1.5 billion years. Because of viruses’ prevalence and their ability to evolve so quickly, Erill believes there are likely other examples of this phenomenon that researchers have yet to discover. The results may even have implications for development of new antibiotics.

“The main message is that the bacterial SOS response is in reality a phage response,” Erill says. “It was not created by bacteria; it was the other way around.”

The bacterial SOS response involves over 40 genes and responds to DNA damage in the cell. When the cell is healthy, a protein called a repressor keeps the genes turned off. But when damage occurs, the repressor molecule self-destructs, allowing the genes to get to work fixing the DNA damage.

Phages also have a molecule that detects DNA damage. When the virus’s host cell experiences damage, that’s a signal to the virus to burst out of the cell and find a new home. “It’s the SOS response because if the bacteria or virus doesn’t get it right, they die,” Erill says.

The exact mechanism and proteins involved in the SOS response vary across groups of bacteria. For this study, the research team set out to identify the repressor molecule in Bacteroidetes, a group of bacteria that makes up a significant fraction of the microbiota in the human gut, but for which the repressor was still unknown.

First, Erill used computational tools to search Bacteroidetes genomes for proteins closely related to the repressor molecules found in other groups of bacteria. But, surprisingly, there were none. “So we started scratching a little bit more,” Erill says.

Next, he looked at genes in Bacteroidetes that one would expect the repressor to regulate—those genes generally involved in the SOS response in other bacteria. Many of these genes in Bacteroidetes shared a particular pattern, like a keyhole for a shared key. Upon further investigation, including collaboration with Aaron Smith, assistant professor of chemistry and biochemistry, the mystery “key” turned out to be a known repressor protein—but, surprisingly, from a phage, not bacteria.

“So we have a bacteriophage repressor controlling the SOS response in this group of bacteria,” Erill says. “I always suspected that the bacterial repressor that controls this system was actually a phage repressor in disguise.”

It’s well understood that over their billion-plus years of shared history, bacteria have incorporated phage DNA into their genomes and repurposed it for their own needs. “So,” Erill says, “it doesn’t take a stretch to imagine a phage at some point going into a bacterial cell, getting inactivated somehow, and then the cell deciding, ‘This repressor responds to DNA damage—that’s perfect!’”

“Our results suggest that bacteriophage repressors have taken up regulating the SOS response in Bacteroidetes,” says Sánchez-Osuna, who is co-advised by Jordi Barbé at UAB, another of the new paper’s authors. That means the most common SOS repressors in other groups of bacteria “may also have originated from the capture of a phage repressor,” he adds. “Why reinvent a function that already exists?”

What’s particularly exciting to Erill about this new study is that the SOS response regulated by the phage repressor in Bacteroidetes is so complex. Previous examples of bacteria gaining new functionality from phage genes have been more straightforward. “You can get a new gene and then get a new trick directly from the gene,” Erill says. In fact, bacteria that cause diseases such as cholera and botulism obtain their virulence directly from phage genes, he explains.

But the new study shows something altogether different. After the bacteria took up the phage repressor gene close to a billion years ago, a complex network of interdependent regulation evolved over time, involving dozens of genes and proteins. The phage repressor is the linchpin molecule for this network, and the network is virtually indistinguishable from similar networks in other groups of bacteria that employ a bacterial repressor.

This diagram from the new paper shows how a bacterial cell can take up a phage (red), and incorporate the phage genome into its own (1). In the typical process, when the bacterial cell suffers DNA damage (2′), the phage takes that as a signal to break out of the cell (3′). But, if the normal phage life cycle is inactivated somehow (2), then the phage genes, and the proteins they produce, can be repurposed. Eventually, many of the bacterial genes (green arrows) can come to be regulated by a phage protein (in this case, the repressor, represented by a pink arrow) (3).

“What we show here is that these networks are the result of convergent evolution,” Erill says. Convergent evolution occurs when organisms evolve very similar traits not based on shared genetic history, but, rather, because the organisms experience similar evolutionary pressures that drive the generation of functionally similar—but genetically distinct—systems. Other examples include wings in bats and birds and fins in whales and fish.

For Erill, this research finding “answers an important evolutionary question, and it points to this process being more frequent and being capable of generating more complexity than we thought,” he says. “We had typically been thinking about getting a gene and using it as-is, and this shows one step beyond that.”

Aaron Smith, right, works with students in his laboratory. Photo by Maralayna Demond ’11 for UMBC.

The results may also influence development of antibiotics. Most antibiotics induce DNA damage in the bacteria they target, which activates the SOS response. However, as the SOS response works to repair the damage, it often makes mistakes, introducing mutations into the DNA. More mutations increases the chances that a mutant will be resistant to the antibiotic.

Some scientists have suggested that new antibiotic drugs should also inhibit the SOS response to prevent the increased risk of generating resistant bacteria, Erill says. This study shows that to be effective, new drugs will need to target the phage repressor as well as the bacterial repressor that orchestrates the SOS response.

While Erill finds the results and implications of this research exciting, he doesn’t find them terribly surprising. “To me, it always made sense that the origin of the switch was the virus,” he says. “In an evolutionary race between a bacterium and a virus, the virus always wins. It has a higher mutation rate and can replicate faster.”

In fact, 20 percent of human DNA is known to come from viruses, Erill says. He believes it is likely much higher. Viruses can do amazing things, like generate a protein that mimics the shape of DNA, which has so far proven impossible for any chemist. Examples like that, and this new study, “show you the level of evolutionary invention that viruses can have,” Erill says, which he discusses more in a piece for The Conversation.

This new study demonstrates Erill’s hunch more convincingly than ever before by deploying a suite of interdisciplinary techniques. Computational work identified the patterns in the Bacteroidetes genes that matched the phage repressor. Then, wet lab work confirmed that the phage repressor would bind to those patterns. Finally, structural analysis in Aaron Smith’s bioinorganic and structural biology lab further proved that the repressor in question was much more closely related to viral proteins than ones with bacterial origin.

“I think this work is a nice illustration of how a blend of big data, computational modeling, and wet-lab experimental biochemistry and molecular biology can come together to answer really intriguing and important questions about evolution,” Smith says.