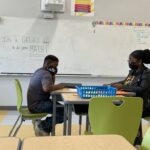 In Baltimore City, middle schoolers are making roller coasters out of insulation tubing and tape. High schoolers are dunking basketballs to learn math equations. And not too far away at UMBC, the Sherman STEM Teacher Scholars are prepping to spread even more innovative, inclusive lessons throughout city schools.

The Sherman STEM Teacher Scholars Program began in the fall of 2007 thanks to the generosity of philanthropists George and Betsy Sherman. The goal of the program is to ​​support scholars to become culturally responsive and compassionate STEM educators in historically underserved, urban schools.

George and Betsy Sherman at the celebration of the Meyerhoff Scholars Program 30th anniversary in 2019. Photo by Jim Berger.

“They’re working in the school buildings that people tend to shy away from because they’ve got those ‘bad kids’ or they don’t have a lot of resources. Our scholars are gravitating to those spaces,” says program director Rehana Shafi.

George Sherman passed away earlier this year but the legacy he left continues to be felt in the lives of the scholars who bear his name. Fourteen years later, the program supports 80 current scholars who will one day join the 140 program alumni who are teaching in high needs schools in Baltimore and throughout the region. All scholars receive scholarships towards their education as well as advising and coaching to embody the Sherman Program’s values.

Putting the fun in active learning

Ben Davis ’11, biological sciences, M.A.T. ’13, was one of the first Sherman scholars to enter the workforce. Today he is teaching at KIPP Ujima Village Academy in Baltimore, where he tries to make sure his middle school science students do one hands-on project a week like making the roller coasters out of household materials or dissecting sharks or frogs. “The kids are able to use scalpels and surgical scissors and… look inside and see what’s going on, [asking] is this similar to what we see in a human or is this different?” says Davis.

Davis on campus with a group of his students. Photo courtesy of Davis.

Davis has also started a summer program to get middle-school girls onto the UMBC campus to attend college courses and engage in lab work like discovering a virus, sequencing its DNA, and even naming it. “They’re building that skill of optimism and grit and growth mindset,” he says.

Sherman scholar Maria Packard ’19, mathematics, M.A.T. ’20, meanwhile, is at Green Street Academy in Baltimore challenging the stigma that math is boring. She has her 11th graders shooting basketball hoops for extra points, giving Algebra 2 an unexpectedly exciting and competitive edge for students she cherishes.

Both Davis’ and Packard’s jobs were made possible through connections made in the Sherman Program. Davis also credits Shafi and other Sherman staff with giving him much-needed support and guidance. “[Shafi] was the person really there every step of the way—she was there for me no matter if it was something that had to do with teaching or science or life,” he says.

Shafi has been with the program since its beginning, guiding it as it evolved from smaller to larger cohorts of students who are likely to teach in urban or other historically underserved schools. To prepare scholars for this, the Sherman Program requires applied learning experiences or volunteering in local classrooms. The program also provides coursework that helps scholars reflect on their own cultural lens and to understand the historical context of schooling in Baltimore. Experiences like this make space for scholars to embrace the humility required to listen to “kids whose own lived experiences are generally different from their own,” says Shafi.

That aspect of cultural humility and social responsibility is what drew Haleemat Adekoya ’22, political science, to UMBC. “I can’t engage my student in academics if I’m not engaging their mind and their soul,” says Adekoya, who plans to be an elementary school teacher who nurtures her students’ identities. “I’m not going to just start talking to you and teaching you—I cannot push you to where I think you should be or your biggest potential without engaging your community and the communities you come from,” she says.

Helping the Sherman scholars reach their own potential was important to George Sherman, says Shafi, and part of that is the scholarship money that helps keep scholars focused on learning. “He profoundly cared about people and their ability to be successful,” she says.

Today, the people in the Sherman program help each other succeed in a close-knit community, Packard says. Alumni get together to chat, discuss books on social issues, and support each other with advice in a challenging field.

Adekoya, student member of the Maryland Higher Education Commission, is optimistic about her future and that of the program. “I see the legacy of the Sherman program as a seed—it’s been planted and people will continue to water that seed…it will be one of those trees in a folk tale that does not die out because the community and the people who have benefited from its impact see the importance of that tree living beyond generations,” she says.

Header image of Adekoya in the classroom, courtesy of the Sherman STEM Teacher Scholars Program.