Finding Your Voice in Fanfiction 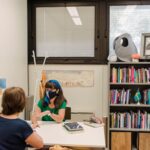 Headshot of Sauro by Marlayna Demond ’11.

Your favorite heroes are joining forces to fight Thanos in Avengers: Endgame. Suddenly, you watch as one by one, they are dropped off on Sesame Street in New York City. You’re seeing the story unfold on the page because you’re creating a merged universe as an exercise to enhance your English language skills. What will happen next? Only you know.

This interplay of fanfiction in language learning and instruction is what Shannon Sauro, associate professor of education and faculty member in the Teaching English to Speakers of Other Languages (TESOL) program at UMBC, strives to showcase in her reading and writing courses. (Indeed, one of Sauro’s students proved that they could merge the Avengers and Sesame Street into one universe for a fanfiction project.)

Fandoms exist in numerous forms, whether related to movies, TV shows, novels, music, video games, or other aspects of pop culture. But how is it relevant to teaching and learning? As Sauro explains, quoting fan studies scholar Mark Duffett, a fan is “someone who has a strong, positive emotional connection to someone or something famous.” Her students come from different backgrounds with these connections under their belt, which makes it easier for them to form an emotional connection to the work as it unfolds. This ultimately helps them gain new language skills.

Prior to moving to the U.S., Sauro lived and taught in Sweden, where she noticed that many students used fanfiction to develop their English language skills. These students took part not only in consuming media in English, but also discussing this media in their own fandom communities.

Maryland language teachers take part in a workshop on fanfiction for foreign language teaching held by the UMBC TESOL program in November of 2019. Photo courtesy of Sauro, standing.

“We can see different cultural attitudes around fiction writing, and I found this refreshing in Sweden because in the Swedish national curriculum, they emphasize the learning of foreign languages not just for work, but also pleasure and the consumption of cultural products [and] self-expression,” shares Sauro. “So writing fanfiction is something you do with language. It’s not considered frivolous or not academic.”

In the U.S., this integration of fanfiction into language learning may not look as familiar to students and instructors. But fanfiction can enable students’ creativity while building on necessary reading and writing skills.

Gaining appreciation for the craft

Language-learning classes often stress the importance of reading and analyzing canonical texts to hone skills. But fanfiction allows students to play around with literary tropes, dialogue, plot, and character development—all within the context of their favorite fandom. BB Kim ’22, a TESOL graduate student, would have never guessed that she’d be writing about the Disney film, Frozen, for a fanfiction project in Teaching Reading and Writing to ESOL/Bilingual Students.

As an ESOL instructor herself, Kim saw the potential of fanfiction to engage students in fun, creative ways. But that didn’t mean she wasn’t skeptical at first about the idea of rewriting the plot of an existing movie.

Kim’s realization arrived only after she finished writing her take on Frozen. With a single click, she published her story on a fanfiction website for a real audience to read and leave comments on (imagine if Elsa embraced her powers from the start instead of hiding them away!). Kim wasn’t expecting her work to receive such attention, but seeing it on the website gave her an undeniable sense of accomplishment.

Kim was especially appreciative of Sauro’s clear and organized instruction, as the students weren’t pushed into the realm of fanfiction without preparation beforehand. “I feel like it was a nice brain break from taking classes that are more theory-based… So it was definitely memorable,” says Kim, adding that Sauro’s teaching style has served as a model for how she conducts her own classes.

Finding yourself in the story

Sauro asks her students to interpret an author’s writing style and incorporate it into their own. Elements like structure and word choice require attention to linguistic detail, making the study of fanfiction quite the endeavor.

The three-country project, FanTALES, in which Sauro was a contributor, has set out to tackle just this. With the collaboration of researchers and teachers from Sweden, Belgium, and Germany, the project has materialized as an online platform providing learning materials to students and instructors. What sets it apart from traditional language education is its emphasis on storytelling (i.e., fanfiction and interactive fiction), digital literacy, and multilingual avenues of learning and interacting with other language users. Students are given a platform to creatively and critically express their identities and perspectives through writing.

Language teachers and trainers participate in the 2019 FanTALES workshop held in Valencia, Spain, as part of the International Conference on Intercultural Learning in the Digital Age. Photo courtesy of Sauro, right.

“By inviting students to either play with the text, transform it, put themselves in it, or merge it with something they actually like, it gets them more engaged and involved with the text and more likely to commit that time to it,” says Sauro, who incorporates materials from FanTALES into the fanfiction project she assigns to students. Even after the students have written and published their stories, she asks them to reflect on the choices they made throughout the writing process. The bigger takeaways that some students gain reveal the value of personalized storytelling.

“I think for me the takeaway is don’t be afraid to do something different… Don’t be afraid to shy away and be creative and allow students to learn in different ways—to be flexible, to be open-minded,” says Kim.

What Sauro hopes for her students, in addition to increased language skills, is to recognize how they can write themselves into a text to express their truths and experiences.

“Often when working with language learners, or young people in general with any different background, you can see that there are certain texts that get reified and selected as a canon, but they don’t represent all the lived experiences in society or in the classroom,” says Sauro. “And fanfiction is a way to give students a voice to talk back to that text, to correct that text, and to write themselves into the canon, into the literature, and into the media that their society or their classrooms celebrate and value.”

Header image: Sauro connects with a student in her office. Photo by Marlayna Demond ’11.