UMBC alumnus Kafui Dzirasa is named an HHMI Investigator, elected to the National Academy of Medicine 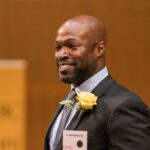 Kafui Dzirasa ‘01, M8, chemical engineering, recently earned two highly prestigious honors distinctive even among leaders in the medical and life sciences: an HHMI Investigator award and election to the National Academy of Medicine.

Dzirasa is the K. Ranga Rama Krishnan Associate Professor of psychiatry and behavioral sciences at Duke University. He earned both his MD and his PhD in neurobiology and neurosciences at Duke. Today, he examines the role of the brain’s electrical activity in psychiatric illness, including depression, bipolar disorder, and addiction, with the goal of creating mechanisms to disrupt these disorders.

Dzirasa is one of 100 new members elected to the National Academy of Medicine this year. The announcement recognizes his “seminal contributions to the neuroscience of emotion and mental illness” as well as his pioneering research methods. It also honors his “contributions to society through science policy and advocacy, a commitment to mentoring, and support for efforts to build a diverse and inclusive scientific workforce,” carrying forward the values of UMBC’s Meyerhoff Scholars Program.

Last month, Dzirasa was also named a Howard Hughes Medical Institute (HHMI) Investigator. He joins a cohort of 33 new Investigators from across the U.S. Each was selected for their ability to “dive deep into tough questions” and address some of the most challenging issues in biomedical research.

Here is the 15min presentation about my vision to cure psychiatric disorders https://t.co/zrFqLMfJa3

HHMI is investing about $300 million in Dzirasa and the other members of the new cohort. The institute also recently announced a plan to invest $2 billion in work to accelerate inclusion and equity throughout the academic science pipeline—a goal championed by Dzirasa, other Meyerhoff alumni, and UMBC President Freeman Hrabowski.

There are approximately 250 HHMI Investigators across the U.S., including UMBC’s Michael Summers, Robert E. Meyerhoff Chair for Excellence in Research and Mentoring and Distinguished University Professor. His chemistry lab focuses on understanding how HIV-1 and other retroviruses assemble and how they package their genetic material. The long-term goal is to make possible new therapeutic approaches to treat AIDS and other diseases.