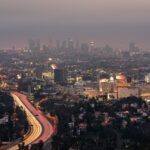 Over time, U.S. environmental regulations have successfully reduced emissions from combustion, such as car engines. That has decreased these emissions’ negative impact on air quality, particularly in urban areas. However, emissions from consumer products such as cleaning supplies, fragrances, inks, adhesives, and more are on the rise, and their effects on air quality are poorly understood.

Not only are there many more different compounds to investigate, but the compounds’ sources are dispersed. Rather than coming from tailpipes or power plants, these emissions can seep out of homes, building ventilation systems, and anywhere else the products are used.

“There’s a lot of uncertainty around this new class of molecules, and they’ve been shown to contribute more and more to poor air quality than traditional emissions. So, if we want to have a better understanding of air quality, now and as climate continues to change, we really need to be able to understand how the chemistry changes with this new class of emissions,” says Reem Hannun, assistant research scientist with UMBC’s Joint Center for Earth Systems Technology (JCET). “It’s a new, interesting dynamic.”

To improve understanding of these emerging air pollutants, the National Oceanic and Atmospheric Administration has funded a proposal co-led by Hannun and Jen Kaiser, an atmospheric scientist at Georgia Tech, for $550,000. The project is part of NOAA’s Atmospheric Emissions and Reactions Observed from Megacities to Marine Areas (AEROMMA) campaign.

The team will capture measurements of many of the polluting molecules, called volatile chemical products, or VCPs, using specialized instruments flown on research aircraft over several of the country’s largest cities. Hannun and UMBC colleague Jason St. Clair will bring their expertise with the instruments to the project. Kaiser’s team offers expertise in modeling and data analysis.

While previous studies have looked at some of the same specific compounds in isolated areas, “This will be the most spatially comprehensive look at these compounds in cities around the United States,” Hannun says.

Getting the whole picture

In addition to detecting many different emerging VCPs, the campaign, delayed due to the pandemic and now set to launch in 2023, will measure the presence of formaldehyde. Formaldehyde is a particularly pertinent compound to examine, because VCPs and the better-understood class of volatile organic compounds (VOCs) produce formaldehyde as a byproduct when they break down through a series of chemical reactions in the air.

“So it’s really useful, because formaldehyde provides an integrated perspective; it can tell us something about the sum of a diverse array of emitted VCPs and VOCs,” Hannun says. “We can use formaldehyde to kind of simplify this really complex series of chemical reactions.”

The NOAA WP-3D aircraft. The AEROMMA instruments will fly on this plane above several of the largest U.S. cities to collect data about the presence of pollutants in air. Photo by NOAA.

“AEROMMA is an exciting opportunity to better understand the urban air quality impacts of a new class of volatile organic compounds, and I believe our formaldehyde measurements will be a great contribution to the overall project,” adds St. Clair. “I’m looking forward to working with Jen and Reem on this project.”

Overall, the team is interested in the long-term effects of VCPs on the formation of ozone and particulates—two key indicators of air quality. “The main goal is to get a better understanding of the chemistry,” Hannun says. To do that, it’s important to know what molecules are in the air at a given moment, and also how they break down over time. “Being able to measure things like formaldehyde will ensure our understanding of that chemical processing,” Hannun explains.

After the researchers collect the data, they will compare the formaldehyde measurements to the measurements of other VCPs and VOCs during the campaign. If it turns out that formaldehyde is, as expected, a useful proxy for the presence of a range of air pollutants, then it can be applied as a scientific indicator in other situations.

As it turns out, satellites in space can measure formaldehyde. “You can’t make these measurements from aircraft all the time, but if we have satellite measurements of formaldehyde, then we can apply our understanding to broader regions across space and time,” Hannun says.

Measuring formaldehyde from space sounds good to Hannun for another reason. “I get a little air sick,” she says, “so I’m always happy to work with the instrument on the ground and then let somebody else fly with it,” she shares.

In addition to contributing important science to the field of air quality studies, the AEROMMA project is important for another reason. “This project is co-led by me and Jen Kaiser at Georgia Tech,” Hannun says. “I feel like the field sciences, especially these measurement campaigns, can be really male-dominated, so it’s exciting to be in a woman-led group doing this. I hope that it will encourage more women to do this kind of field work.”

There are other long-term implications. Over time, if the researchers determine that a specific class of VCPs plays a significant role in ozone production, for example, “it could be that in several years this type of work would help put regulations or restrictions on the use of some of these more noxious or deleterious compounds,” Hannun says. And that would allow everyone to breathe a little easier.

Header image: Smog hovers over Los Angeles, one of the U.S. cities with the worst air pollution. Los Angeles is one of the cities the AEROMMA campaign will visit as it collects data about pollutants across the country. Photo by Maciek Lulko, used under CC-BY-NC-2.0.