The Hospitality of UMBC’s Student Clubs 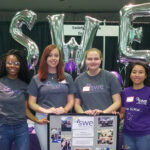 ¿No hablas español? Not a problem. The Spanish Conversation Club is happy to have you! Don’t identify as a woman or engineering major? The Society of Women Engineers (SWE) still welcomes you. Interested in philosophy but not a philosophy major? Didn’t deter the past president of Philosophers Anonymous from taking office.

As a new semester gets underway (make sure to visit Involvement Fest, September 9), these and dozens of other student organizations readily welcome Retrievers who may not assume that the club is for them. Not surprisingly, UMBC clubs and orgs thrive when new perspectives show up.

When Quinlan Murphy ’21, political science, served as president of Philosophers Anonymous, the council of majors for philosophy students, he was determined to make the club feel like home to any interested student. This includes inviting discussions about Hannah Arendt’s warning against the preconditions for totalitarianism to attending online art tours as museums opened their doors virtually during the pandemic. Another of the club’s goals, he says, was to make the department’s physical space in the Performing Arts & Humanities Building a welcoming place for students in between classes. “We wanted to create a little bit of a domestic vibe, so students felt invited into the building—we wanted a tangible space for them to feel at home,” says Murphy, who also obtained a certificate in philosophy.

Known better as PhilAnon, the group traditionally meets at noon on Tuesdays to allow students to present ideas—their own or others—and then follow a group discussion. “We want people to discuss these ideas outside of class with a little bit less formality, without assignments, without quizzes or tests,” says Murphy. The group also invites other majors and departments to participate, giving talks on bioethics or the hard sciences to discuss the ethical and philosophical corollaries of their academic expertise.

“Philosophy majors and other members are people who are going to go on to work in the humanities or academics,” says Murphy, “and a critical part of performing that job is being able to present ideas effectively and quickly, and then also having those ideas be criticized and poked by others.”

Student groups make use of The Forum sculpture outside of the Performing Arts & Humanities Building in 2019. Photo by Marlayna Demond ’11.

Murphy, as a non-traditionally aged student and a commuter, has high hopes for PhilAnon and other clubs on campus. “I certainly think that the more involvement people have in school, the better college will be—it’s not just about grades and tests and essays. It’s also about growing as a person. And I think that requires interacting with your classmates outside of the classroom.”

Pull up a silla (chair)

One of Sheila Yeboah ’23, biological sciences, favorite memories of the last semester is playing online pictionary on Webex with the Spanish Conversation Club. “The combination of the members’ poor drawing skills and the wealth of Spanish synonyms made the game extra difficult,” laughs Yeboah, but she adds that the easy-going nature of the club’s president James Angle and the other executive officers makes the student org a relaxed place to learn and have fun.

Yeboah says that previously her struggle with Spanish was having opportunities to speak it, and the low pressure of the conversation club was exactly what she needed. Yeboah, who is minoring in Spanish, joined the Spanish Conversation Club last semester when they were meeting virtually. “This club is primarily focused on forming friendships and practicing communication,” says Yeboah. “If you are a person that is a little more reserved, like me, it’s a very welcoming environment and you’re not going to feel like you can’t fit in.”

Angle ’22, modern languages and linguistics, became club president his sophomore year when the club had a vacuum of leadership. He and his friend Kyndall Hardwick ’22, English, the vice president, aim to make everyone feel welcome. “So many people get scared away because they think ‘I don’t know enough Spanish at that high level,’” says Angle, “but it could literally be your first day of Spanish class and we’d say ‘Come in.’”

Angle, who recently started taking Russian classes, knows that the hardest part of language learning can be getting comfortable speaking. “That’s the biggest battle,” he says, “but come play some fun games with us and get comfortable speaking Spanish while enjoying yourself.”

Lilly, left, and other SWE members at the National Conference in Anaheim, California in 2019. Photo courtesy of Kaitlynn Lilly.

At previous Involvement Fests, some students have balked at joining the Society of Women Engineers (SWE), says current president Kaitlynn Lilly, who is not an engineering major. Lilly, who is studying mathematics and physics, says that she and other club leaders emphasize that the space is accessible for anyone who “wants to empower women and move society forward,” says Lilly. “It’s a mix between creating a community of people who support women in STEM and also providing opportunities to meet with companies, practice professional development, and also be social.”

This three-fold goal is the intentional result of Lilly and others on the executive board asking themselves what the purpose of their community was. “We didn’t always have a third of our meetings mixed between social, professional development, and career,” says Lilly, a 2021 Goldwater Scholar. “We made a very conscious decision last year to do that because we used to have a company present to us at every single meeting. And it was really hard for club members to really form that community.”

Before the pandemic, says Lilly, the group was already hosting hybrid meetings to broaden the horizons of what companies they could invite to present. SWE will keep the hybrid format going forward for the convenience of people who commute or people who can’t make the meeting time.

Jessica Adams ’22, mechanical engineering, is starting her fourth year as a SWE member and her first as a leader. As the public relations chair, she’s eager to see the group grow its membership. “As we get a wider range of perspectives in our club, it allows us to learn about other people’s backgrounds so that we can understand where other people are coming from,” says Adams. “These interactions will make each of us a better candidate for any sort of jobs or internships we apply for in the future.”

Murphy, who graduated last spring but hopes to stay connected to PhilAnon virtually, unsurprisingly sees students’ extracurricular involvement through the lens of what is morally and ethically good.

“I think students should see their time at UMBC as an opportunity for social and personal growth and not just like a job training program,” he says. “They should be able to ask hard questions and explore ideas informally. I think it’s really critical that there’s these spaces for people to have these conversations away from professors and with their peers.”

Whether that conversation is in Spanish or takes place online or in person, there’s a student club waiting to welcome all newcomers with open arms. Find out more at Involvement Fest, September 9 or online all year.