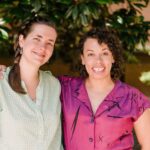 How many ways are there to make a sticky protein? That’s the overarching question driving new research by Mercedes Burns, assistant professor of biological sciences, and Sarah Stellwagen, a postdoc at UNC Charlotte and former postdoc at UMBC.

Burns and Stellwagen study arachnids, a diverse group of invertebrate animals that includes spiders. Materials scientists have long envied the strong, flexible, and sometimes sticky silks the eight-legged critters produce, but spider silks have so far proven difficult to replicate effectively in a laboratory. That’s partly because the genes responsible for producing the silk proteins are so long that typical DNA sequencing methods are insufficient for gene discovery. Additionally, spinning synthetic silk protein into fiber isn’t scalable yet.

“That’s been a major reason why no one’s been able to make their own spider silk,” Burns says. With $900,000 in funding from a new National Science Foundation grant, Burns and Stellwagen will explore sticky substances used to capture prey by arachnids and a few other animals, including glowworms (the larval stage of a type of fly) and velvet worms (a group of ancient, worm-like invertebrates found across the Southern Hemisphere).

The substances their non-spider study organisms produce “are sticky like spider silk glues, but maybe their genetic architecture is easier for us to duplicate,” Burns says. “That’s one of the long term goals: Can we make a synthetic glue, based on these same principles, with more efficacy than we’ve been able to do with spider silks?” This glue could have medical or industrial applications, she notes.

How to make a sticky protein

Burns and Stellwagen will study the sticky silks produced by velvet worms, glowworms, spiders, and harvesters (also known as daddy longlegs). Many people may lump them all into the “creepy-crawly” category, but they actually diverged hundreds of millions of years ago. Yet they all use sticky substances to capture prey. “So what we want to know is, ‘Is there one way to make a sticky protein, or are there many different ways to make sticky proteins?’” Burns says.

For each of their study species, they will compare the sequences of the genes responsible for the sticky stuff. Then they’ll compare the substances’ function by measuring just how sticky it is and under what conditions it performs best, such as a particular humidity or temperature. Finally, they’ll consider the structure of the proteins themselves, with a special focus on whether sugar compounds bound to the backbone of the protein play an important role in its function.

“By comparing those characteristics among different groups, we hope to understand what the necessary components of sticky biomaterial prey capture proteins are,” Burns says.

“The results of the study will provide opportunities for further research,” Stellwagen adds. “There are many other species from the groups we are studying here, so projects comparing glues more broadly within species groups is one area for expansion later on, or even diving deeper into the biomechanics across groups by including more test conditions.”

Burns and Stellwagen have continued to collaborate on other projects since Stellwagen moved from UMBC to UNC Charlotte last year. Just this week, they published a new paper in Integrative and Comparative Biology on the glue genes in the bolas spider.

Rather than depositing droplets of glue around a web, like orb-weaving spiders, the bolas spider hangs one huge droplet of glue at the end of a long thread of silk. The spider releases chemicals mimicking female moths, luring in male moths. It then uses tiny hairs to sense vibrations in the air as a male moth approaches. At the right moment, it swings its glue bolas like a lasso and, “if they hit the moth,” Burns explains, “they reel it in really, really quick and dispatch it with their venom.”

Stellwagen and Burns are the first to sequence the glue gene for this species. While genetic sequencing has become commonplace in recent years, spider glue genes are so long and so repetitive that the duo had to employ a special process called “long-read sequencing” to produce results. In 2019, Stellwagen became the first to sequence any spider species’ glue genes, which also required long-read sequencing, and the bolas spider gene was much longer still.

The work funded by the new grant will fill an important gap in spider silk research. “We don’t have anyone studying the intersection between the function and primary elements of the gene sequence for spider silk, so that’s pretty exciting,” Burns says. “From there we can understand more about how these genes evolved.”

Is it necessary to have a long, repetitive gene to make a sticky protein, for example? Burns thinks that’s a possibility. Maybe those repetitive sections help the protein fold onto itself in a way that allows it to be strong and flexible.

“I’m thrilled our project was selected for funding, not only because we’re so passionate and excited about the research, but because at this career stage, it’s life changing,” Stellwagen says. “This gives us an opportunity to prove ourselves and set ourselves up for long term success.”

Another exciting outcome of the grant is funding for undergraduates to attend “Spider Camp,” a two-week intensive summer field experience for undergraduates, graduates, and enthusiasts at the Highlands Biological Station in western North Carolina that Stellwagen co-instructs. Burns will introduce new material on Opiliones (the scientific name for daddy longlegs). The Appalachians are a center of diversity for this group of arachnids that Burns focuses on in her other projects. The region is rich in other arachnid life as well.

By giving UMBC students a chance to participate in an engaging field experience, Burns hopes to help diversify the field of arachnology. “We want to make classes like that available to students who might otherwise never take a field course,” she says.

The work Burns and Stellwagen do will open doors for further research—perhaps one day completed by those who attend Spider Camp. “There’s a lot of interesting evolutionary questions that come from this,” Burns says. “I enjoy trying to figure out how species that are lesser known address the challenges of life.”