UMBC graduates more Black students who go on to earn doctorates in natural sciences and engineering than any other U.S. college 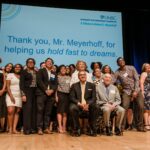 As a trifecta of crises upended life in 2020, the need for a diverse scientific and medical community grew ever more clear. George Floyd’s murder elicited worldwide protests against racial injustice. COVID-19 affected all of our lives and had an outsize impact on Black and brown communities. And COVID-19’s economic fallout only exacerbated extreme wealth inequality.

At the same time, while some Black and brown people were reluctant to take the vaccine because of a negative history with the medical establishment, there was no one better than Kizzmekia Corbett ’08, M16, biological sciences and sociology, to reach out to “vaccine inquisitive” folks, as she describes them. Corbett rose to fame in 2020 as the lead of the NIH team developing the Moderna vaccine and as the first Black woman in the world to create a vaccine.

Kizzmekia Corbett, who led the team that developed the Moderna COVID-19 vaccine, talks to CNN in UMBC’s Interdisciplinary Life Sciences Building in April 2021. Photo by Marlayna Demond ’11 for UMBC.

It is in this context that UMBC President Freeman Hrabowski and Peter Henderson, senior advisor to the president, published their latest article in Issues in Science and Technology, “Nothing succeeds like success,” which addresses the persistent and urgent need to diversify the group of professionals in STEMM (science, technology, engineering, mathematics, and medicine).

“When we have greater diversity of representation, we also have greater diversity of information, knowledge, lived experience, and perspectives—each of which enhances discovery and innovation,” Hrabowski and Henderson write. “When the science and engineering community looks like the United States, we find greater trust in and support for that community across groups in the population.”

The Meyerhoff Scholars Program at UMBC, and its more than a dozen replications elsewhere, have made great strides in supporting the success of underrepresented students in STEMM. Hrabowski and Henderson argue that the U.S. should frame the need for a diverse scientific workforce as a national priority and invest in it accordingly. Programs like the Meyerhoff Scholars that have proven their ability to move the needle, they write, should be short-listed for that investment, because “nothing succeeds like success.”

At the same time, “Over the past 30 years, our six-year completion rate [at UMBC for all students] has doubled, and the gap in completion rates between white and Black students has disappeared,” they write.

At UMBC, more than 1,400 undergraduate Meyerhoff Scholars, all of whom are committed to diversity in STEMM, have earned their undergraduate degrees. More than 800 of those have earned advanced degrees, and 300 more are currently completing graduate programs at top institutions across the country.

Meyerhoff Scholars at an annual dinner. Photo by Marlayna Demond ’11 for UMBC.

And yet, this powerful example of progress exists in a nation that has seen minimal growth, and, in some fields, a backslide in minority participation in STEMM in the last decade, Hrabowski and Henderson explain. But programs like Meyerhoff have shown that big change is possible, and how to make it happen.

For example, for over 30 years the program has offered academic, social, and financial support. UMBC instructors have also invested time in completing significant course redesigns that shift the focus from “weeding out” to promoting success, and end up helping all students. More recently, an increased focus on faculty diversity has taken shape and begun to have an impact. Those efforts have led to impressive outcomes and a profound culture shift.

The Meyerhoff Scholars program has inspired several other student success initiatives at UMBC that offer various forms of support for students, including a cohort model that enhances a sense of belonging. For example, STEM BUILD is an NIH-funded program designed to help diversify the biomedical sciences. Programs in other fields, such as the Sondheim Public Affairs Scholars and the Linehan Artist Scholars, also follow some of the same principles.

Other institutions have taken note. Programs at Pennsylvania State University and University of North Carolina at Chapel Hill have replicated the principles of the Meyerhoff Scholars with great success. UC San Diego and UC Berkeley have begun their own replication efforts. And programs at other institutions with similar principles, such as University of Florida and the historically Black Howard University, have also seen dramatic change in their graduation rates for underrepresented students in science, technology, engineering, and math.

A student conducts research at UC San Diego, which launched a replication of the Meyerhoff Scholars, called the Pathways to STEM (PATHS), in 2019. Photo by UCSD Jacobs School of Engineering, CC-BY-2.0 license.

Investing in the future

In early 2021, a group of scientists wrote in Sciencerecommending the formation of a new National Science and Engineering Diversity Initiative (NSEDI). They suggested NSEDI should allocate $10 billion per year for several years to improve diversity in science. “These and any other funds that target increasing diversity should be allocated judiciously,” Hrabowski and Henderson argue. “Financial resources should flow to institutions that most successfully contribute to greater diversity—regardless of institutional type.”

In the end, “producing scientists is about more than increasing the numbers. It is about changing attitudes and transforming the lives of people,” Hrabowski and Henderson write. “It is about showing our society what is possible when we invest in the talent of all our youth.”

As the pandemic, widening economic inequality, and rising demands for racial justice demonstrate, there is still much work to be done. “The message is clear,” Hrabowski and Henderson declare. “Investing in young people, replicating best practices of effective programs, and committing substantially more money to support Black and minority scientists can indeed move the needle and also tackle fundamental scientific and public health problems for humankind.”