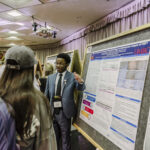 Olumide Fagboyegun ’21, M29, biochemistry, is a recent UMBC graduate and a Meyerhoff Scholar. He will soon begin his Ph.D. in neuroscience at Harvard. Since graduating, he’s reflected on the mentors who have made these steps possible. What, exactly, made them great mentors, he asks. And how can he pass that gift along to future students, particularly other students from underrepresented groups?

Picture this: You’re sitting in a well-lit hotel ballroom at a table draped with a white tablecloth, nervously perspiring. Immediately in front of you is a podium on a stage, and encircling the ballroom are dozens of academics at various stages in their careers, from predoctoral trainees to full professors. One thing that stands out to you—even more imposing than their sheer presence—is the fact that almost all of them are Black. These academics are not only a testament to the fact that if we hold fast to the dream of equity in academia, it’s only a matter of time until it is realized. But for Black students in particular, this kind of experience is incredibly important.

My experience as a member of the Meyerhoff Family at UMBC prepared me as a scientist and a scholar through the invaluable mentoring relationships where I was able to see a road to success forged by underrepresented students who went before me.

What makes a good mentor?

All my effective mentoring relationships have begun with one thing: reciprocated belief. My mentors have believed in me and I, in turn, have believed in their abilities to be good mentors for me. Both elements are necessary for an effective mentoring relationship. As a result, they have pushed me to believe in myself—to be better and more confident, in every regard. And I believed in their guidance and their affirmation of my potential.

One close mentor pushed me to improve my networking skills while believing that I would represent my program and my university well wherever I went and with whomever I met. Another mentor believed in my capacity to do good science, and pushed me to reflect on the impact my scientific endeavors can have on society.

It is worth reiterating that mentorship styles are remarkably diverse. One of the characteristics of a good mentor is the ability to see when one’s mentoring style may not be effective for a particular mentee, and to either modify their style, or to identify another mentor who would better meet the mentee’s needs. One of the strengths of the Meyerhoff Scholars Program is its ability to provide a wide range of mentoring styles to make sure that every student can find the support they need and achieve success on their chosen path, be it medical school, industry, or graduate school.

We often emphasize the role of the mentor, but the mentee’s role is no less important. New Meyerhoff Scholars start by going through a Summer Bridge program, which emphasizes the concept of the Meyerhoff Family—our scholar and alumni community, focused on mutual support. Through Summer Bridge, students learn to be open-minded to advice from their peers and mentors and to be comfortable proactively asking for help. Importantly, students learn to identify potential areas of self-improvement.

My own path, as a transfer student from Anne Arundel Community College, is less common for a Meyerhoff Scholar. While I did not go through Summer Bridge, I was embraced wholeheartedly by the Meyerhoff Family, and I believed that the mentorship provided in the Meyerhoff Scholars Program would be invaluable.

Fagboyegun with his fellow M29 cohort members, photo courtesy of the Meyerhoff Program.

The ripple effects of mentoring

For underrepresented students, mentorship can play a particularly significant role in success.

In a recent piece published in Nature Medicine, Kizzmekia Corbett, ’08, M16, biological sciences and sociology, the leading scientist behind the Moderna COVID-19 vaccine, wrote about her first experience conducting scientific research as a high school student, and the impact, as a young Black woman, of having a Black scientist as her mentor. “This left me with an understanding of the necessity of visible representation in underserved communities, and the realization that one’s approach to mentorship is equally as important as (or arguably more important than) their approach to scientific discovery,” Corbett wrote.

Early in my college career, I was clued into the disparities that are characteristic of science and academia, which persist despite efforts to address them. In academia, these manifest, in part, as resource stratification and disparity in opportunities, including access to networks and mentors.

On a personal level, as a Queer Black student in STEM, not seeing people who share my identity represented can make it feel as though there is no place for me in academia. Underrepresented minority (URM) students are acutely aware that most of the difficulty in forging that place in academia falls on the early URM individuals who attempt it. These individuals then face increasing pressure both internally and externally to succeed and be a model or a trailblazer. After all, insufficient diversity can have far-reaching effects, such as in healthcare disparities, and URM scientists have a strong motivation to address these problems. These pressures, coupled with the already high demands of academia, wear away uniquely on URM scholars.

Fagboyegun presents his research at Undergraduate Research and Creative Achievement Day in 2019. Photo by Marlayna Demond ’11.

Here, again, the  Meyerhoff Scholars Program shines. The Meyerhoff alumni network is remarkably connected, and ensures that graduates will always have peer mentors they are able to rely on, even if they are based in institutions with few other URM scientists, doctors, scholars, or other professionals. The strength of the Meyerhoff Family creates a ripple effect in those new institutions, providing Meyerhoff-style mentoring to URM students and more junior colleagues, which results in a cultural change. As a recent Meyerhoff alumnus, I intend to carry forward this culture change as well.

The scene I set at the beginning of this essay is my memory from the annual University System of Maryland Summer Bridging Conference, hosted by the Louis Stokes Alliance for Minority Participation (LSAMP) my sophomore year. Such a scene is rare in academia, but it doesn’t have to be. The well-documented outcomes of the Meyerhoff Scholars Program so far suggest that it is entirely possible to permanently change the landscape of science to be much more inclusive of scholars of all identities.

It is worth noting that although a shared identity between a mentor and mentee isn’t necessary for all mentoring relationships, it often results in remarkably positive outcomes, as highlighted by Dr. Corbett in the quote above.

Like many others, I have struggled with the idea that I might not be good enough to pursue a career in academia. However, the mentorship I’ve received through the Meyerhoff Scholars Program, LSAMP, and other initiatives has helped dissuade me of that notion. To achieve this, my mentors often help to place everything “in view” for me: my goals, weaknesses, strengths, accomplishments, and my place in the scientific and non-scientific world. This opportunity to zoom out and see the broader perspective has been vital to my success so far.

We must recognize that mentorship is an essential part of the larger movement to diversify science in pursuit of an equitable society—a scaffold that ensures progress moves ever forward.