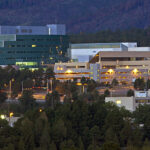 Noah Sienkiewicz is working alongside NASA and UMBC colleagues to design and build HARP2, an instrument that will launch on NASA’s PACE mission in 2024. Nathan Myers is partnering with top scientists across the country at Los Alamos National Laboratory in New Mexico on innovative quantum computing research. And both physics Ph.D. students have just received highly competitive grants that will help them take their work even further.

Myers received an Office of Science Graduate Student Research award from the U.S. Department of Energy (DOE), which will fund an 11-month experience at Los Alamos. Sienkiewicz received a Future Investigators in NASA Earth and Space Science and Technology (FINESST) Fellowship, which will fund his Ph.D. thesis work at UMBC for up to the next three years.

Myers had already planned to pursue this area of research, but “now we’ll have the resources and the collaboration with all the researchers at Los Alamos, which is one of the foremost quantum computing research centers in the U.S.,” he says. “So it’s pretty exciting.”

Begin with the end in mind

Sebastian Deffner, assistant professor of physics and Myers’s mentor, has gone the extra mile to make sure he is in a strong position for the future. In addition to supporting his students’ research, Deffner also helps his mentees develop “related skills, in terms of how to write and apply for these funding opportunities, awards, and grants, and just how to build your network and get in contact with people,” Myers says.

In fact, “When I was first starting research,” Myers says, “one of the first conversations we had was, ‘So, when you graduate, what are some of the places where you might be interested in working? And who can we talk to, to start that process as early as possible?”

Los Alamos was on Myers’s list. Deffner connected Myers with Yigit Subasi, a Los Alamos scientist, and their conversation revealed significant overlap between their research interests. They were coming at the same questions from different angles. So, they collaborated on the proposal for the DOE funding to blend their ideas and work on a breakthrough together.

“Winning this award will give Nathan a unique opportunity to interact with and learn from world-leading experts at a top-tier research location,” Deffner says. “The potential impact on his scientific career can hardly be overestimated, and I hope that this will set a new benchmark for the excellence of our graduate education at UMBC.”

The Los Alamos National Laboratory is perched at 7,355 feet, atop the Pajarito Plateau in the Jemez Mountains in northern New Mexico. Photo courtesy LANL.

Sienkiewicz started his UMBC career in a research rotation with Zhibo Zhang, associate professor of physics. He then rotated to work with Vanderlei Martins, professor of physics and director of UMBC’s Earth and Space Institute, who is now his Ph.D. advisor. Zhang gave Sienkiewicz an introduction to computational techniques. And with Martins, he learned how to apply those techniques to data that address the most fundamental physics describing an instrument or phenomenon.

Those two experiences informed Sienkiewicz’s path forward. Now he wants to be involved in “the full arc” of atmospheric research projects— “to make sure the whole process is interconnected and well-informed,” starting with design, and progressing through testing and data processing.

These days, Sienkiewicz is working on both HARP2 and the original HARP, which he helped develop before it launched successfully in fall 2019. In the morning, he analyzes incoming HARP data. Then, in the afternoon, he uses what he observed to inform decisions about HARP2. Both instruments have the potential to inform how climate models account for clouds and tiny particles in the air called aerosols, such as dust, smoke, and other airborne chemicals.

Bands of cirrus clouds above Australia. Clouds are one of the hardest factors for climate models to account for. Data collected by HARP and HARP2 should help. Photo: NASA.

“My goals are to straddle that line between someone who runs code all day and someone who goes into the lab and does the testing,” Sienkiewicz says. It’s a rarer path among atmospheric physicists, but one that offers exciting opportunities. In particular, Sienkiewicz’s comprehensive perspective will be beneficial in the planning process for NASA’s next decade, he believes.

Both HARP and HARP2 are examples of polarimeters, which will be a major focus of NASA experiments over the next 10 years. Sienkiewicz hopes to stay involved in their development after he graduates, in 2023 or 2024, by transitioning to a role at NASA proper just in time for the PACE mission launch that will carry HARP2 into space.

Through UMBC’s strong connections with the space agency, “I’ve gotten to be more exposed to actual NASA work, and sit in meetings with NASA officials,” Sienkiewicz says. “So, as far as the childhood dream of ‘I want to work for NASA,’ I feel like it’s been a great stepping stone to doing that and having direct interaction with those people and building a network.”

Just after the HARP launch in 2019, Sienkiewicz (far left) and other UMBC students listen to Vanderlei Martins (right) as he offers an impromptu lesson in atmospheric physics. Photo by Sarah Hansen, M.S. ’15.

Support at every level

With Sienkiewicz focused on space and climate science and Myers on quantum computing, their physics research could hardly be farther apart. But they actually have a lot in common.

Sienkiewicz and Myers began their graduate studies at UMBC at the same time. “We sat shoulder to shoulder in the first-year grad student office in 2017,” Sienkiewicz says. “Especially in that first year, our whole cohort really stuck together and helped each other a lot.”

They became friends and housemates. Even as their research trajectories diverged, living in the same house during a pandemic exposed them to each other’s work in new ways. “I’ve probably learned more about quantum thermodynamics in the last year than I ever have, because I hear him in the other room going on and on about anyons,” Sienkiewicz says with a smile.

Their personal camaraderie speaks to a larger graduate student support network in physics at UMBC. For both Myers and Sienkiewicz, the application process for their awards was a group effort, with multiple rounds of feedback from faculty, peers, and staff at UMBC’s Joint Center for Earth Systems Technology (JCET).

In addition to the DOE award, Myers is also funded by the private sector arm of NASA, Paraton, and benefits from a National Science Foundation grant awarded to Deffner. Sienkiewicz received a Graduate Assistant in Areas of National Need award from the U.S. Department of Education in his first year, and, later, a JCET fellowship.

“Getting the funding opportunities through UMBC and making those connections has been instrumental to my progress,” Sienkiewicz says. “Our department really supports students by keeping them funded and showing them opportunities. They help set us up for success.”

Banner image: Two scientists work on the HARP polarimeter in a clean room at UMBC. Sienkiewicz helped fabricate the HARP satellite, including time in the clean room, and now is working on HARP2. Photo by Marlayna Demond ’11 for UMBC