UMBC’s Krizmanic, Cannady contribute to research that adds new wrinkle to understanding the origins of matter in the Milky Way 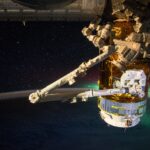 New findings published this week in Physical Review Letters suggest that carbon, oxygen, and hydrogen cosmic rays travel through the galaxy toward Earth in a similar way, but, surprisingly, that iron arrives at Earth differently. Learning more about how cosmic rays move through the galaxy helps address a fundamental, lingering question in astrophysics: How is matter generated and distributed across the universe?

Cosmic rays are atomic nuclei—atoms stripped of their electrons—that are constantly whizzing through space at nearly the speed of light. They enter Earth’s atmosphere at extremely high energies. Information about these cosmic rays can give scientists clues about where they came from in the galaxy and what kind of event generated them.

An instrument on the International Space Station (ISS) called the Calorimetric Electron Telescope (CALET) has been collecting data about cosmic rays since 2015. The data include details such as how many and what kinds of atoms are arriving, and how much energy they’re arriving with. The American, Italian, and Japanese teams that manage CALET, including UMBC’s Krizmanic and postdoc Nick Cannady, collaborated on the new research.

Iron on the move

Cosmic rays arrive at Earth from elsewhere in the galaxy at a huge range of energies—anywhere from 1 billion volts to 100 billion billion volts. The CALET instrument is one of extremely few in space that is able to deliver fine detail about the cosmic rays it detects. A graph called a cosmic ray spectrum shows how many cosmic rays are arriving at the detector at each energy level. The spectra for carbon, oxygen, and hydrogen cosmic rays are very similar, but the key finding from the new paper is that the spectrum for iron is significantly different.

This image combines data from four space telescopes to reconstruct all that remains of the oldest documented example of a supernova, which was witnessed in 185 A.D. by Chinese astronomers. Supernovae are understood to be important sources of cosmic rays arriving at Earth. Image credit: NASA

There are several possibilities to explain the differences between iron and the three lighter elements. The cosmic rays could accelerate or travel through the galaxy differently, although scientists generally believe they understand the latter, Krizmanic says.

“Something that needs to be emphasized is that the way the elements get from the sources to us is different, but it may be that the sources are different as well,” adds Michael Cherry, physics professor emeritus at Louisiana State University (LSU) and a co-author on the new paper. Scientists generally believe that cosmic rays originate from exploding stars (supernovae), but neutron stars or very massive stars could be other potential sources.

An instrument like CALET is important for answering questions about how cosmic rays accelerate and travel, and where they come from. Instruments on the ground or balloons flown high in Earth’s atmosphere were the main source of cosmic ray data in the past. But by the time cosmic rays reach those instruments, they have already interacted with Earth’s atmosphere and broken down into secondary particles. With Earth-based instruments, it is nearly impossible to identify precisely how many primary cosmic rays and which elements are arriving, plus their energies. But CALET, being on the ISS above the atmosphere, can measure the particles directly and distinguish individual elements precisely.

Iron is a particularly useful element to analyze, explains Cannady, a postdoc with CSST and a former Ph.D. student with Cherry at LSU. On their way to Earth, cosmic rays can break down into secondary particles, and it can be hard to distinguish between original particles ejected from a source (like a supernova) and secondary particles. That complicates deductions about where the particles originally came from.

“As things interact on their way to us, then you’ll get essentially conversions from one element to another,” Cannady says. “Iron is unique, in that being one of the heaviest things that can be synthesized in regular stellar evolution, we’re pretty certain that it is pretty much all primary cosmic rays. It’s the only pure primary cosmic ray, where with others you’ll have some secondary components feeding into that as well.”

Measuring cosmic rays gives scientists a unique view into high-energy processes happening far, far away. The cosmic rays arriving at CALET represent “the stuff we’re made of. We are made of stardust,” Cherry says. “And energetic sources, things like supernovas, eject that material from their interiors, out into the galaxy, where it’s distributed, forms new planets, solar systems, and… us.”

All of the rocky and metallic material we stand on, the iron in our blood, the calcium in our teeth, the carbon in our genes were produced billions of years ago in the interior of a red giant star. We are made of star-stuff.

“The study of cosmic rays is the study of how the universe generates and distributes matter, and how that affects the evolution of the galaxy,” Krizmanic adds. “So really it’s studying the astrophysics of this engine we call the Milky Way that’s throwing all these elements around.”

The Japanese space agency launched CALET and today leads the mission in collaboration with the U.S. and Italian teams. In the U.S., the CALET team includes researchers from LSU; NASA Goddard Space Flight Center; UMBC; University of Maryland, College Park; University of Denver; and Washington University.The new paper is the fifth from this highly successful international collaboration published in PRL, one of the most prestigious physics journals.

CALET was optimized to detect cosmic ray electrons, because their spectrum can contain information about their sources. That’s especially true for sources that are relatively close to Earth in galactic terms: within less than one-thirtieth the distance across the Milky Way. But CALET also detects the atomic nuclei of cosmic rays very precisely. Now those nuclei are offering important insights about the sources of cosmic rays and how they got to Earth.

“We didn’t expect that the nuclei – the carbon, oxygen, protons, iron – would really start showing some of these detailed differences that are clearly pointing at things we don’t know,” Cherry says.

The latest finding creates more questions than it answers, emphasizing that there is still more to learn about how matter is generated and moves around the galaxy. “That’s a fundamental question: How do you make matter?” Krizmanic says. But, he adds, “That’s the whole point of why we went in this business, to try to understand more about how the universe works.”

Banner image: A Japanese transfer vehicle (labeled HTV-5) is docked at the International Space Station. The CALET experiment is being extracted by the station’s robotic arm (labeled with “Canada”). Credit: NASA