As Urban Life Resumes, Can US Cities Avert Gridlock? 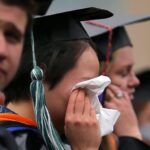 Traffic is so ubiquitous in U.S. cities that until recently, imagining urban life without it meant looking to other nations for examples. Then, in 2020, COVID-19 closures and lockdowns took drivers off the roads. The thought experiment became real.

Second, private vehicular traffic declined by more than 50% in most metro areas, and by more than 75% in some tech-oriented cities such as San Francisco, where more people could work from home. With less traffic, cities became quieter, less polluted. People could hear birdsong for the first time. Air quality improved. Skies were clearer.

Surprisingly, however, traffic accidents did not lessen. Though fewer people were driving, average speed levels increased with emptier roads. Distracted driving also increased, with more drivers texting, emailing and shopping while behind the wheel. Overconfidence, speed and distraction led to an increase in accidents. 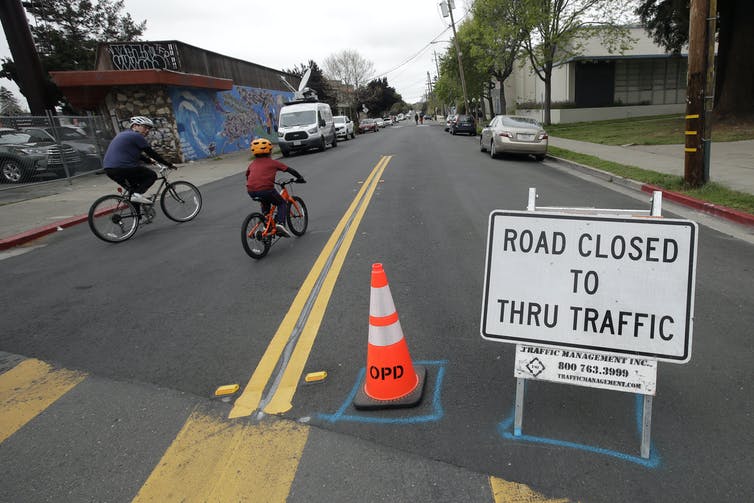 Oakland, California, closed 74 miles of streets in the spring of 2020 to give people safe spaces to get outdoors and exercise. AP Photo/Jeff Chiu

As states lift pandemic restrictions and workers debate whether to return to office settings, will these trends continue? As a scholar who researches cities, I expect the following key factors to shape what post-pandemic traffic looks like.

Public transportation finances took a big hit during the pandemic as ridership shrank. Many cities responded by reducing bus and train service, eliminating routes and laying off employees. Whether urban public transportation can recover over the longer term is a critical question.

So far, surveys suggest that more affluent riders are less willing to return, especially if they can work productively from home. There is still a lingering sense that public transportation, and indeed all ride-sharing, is riskier than walking, cycling or personal auto travel.

Any longer-term declines in the quality of public transportation will be disproportionately shouldered by lower-income workers, who have less choice and will be forced to navigate more expensive, less reliable services. The ripple effects on access to employment opportunities, commuting times and general quality of life could be severe, adding yet another layer to mounting inequality in U.S. society.

Public transportation already was chronically underfunded in the U.S. before 2020, and the pandemic only added to these fiscal woes. However, the scale of the current crisis may be changing attitudes, especially at the federal level. 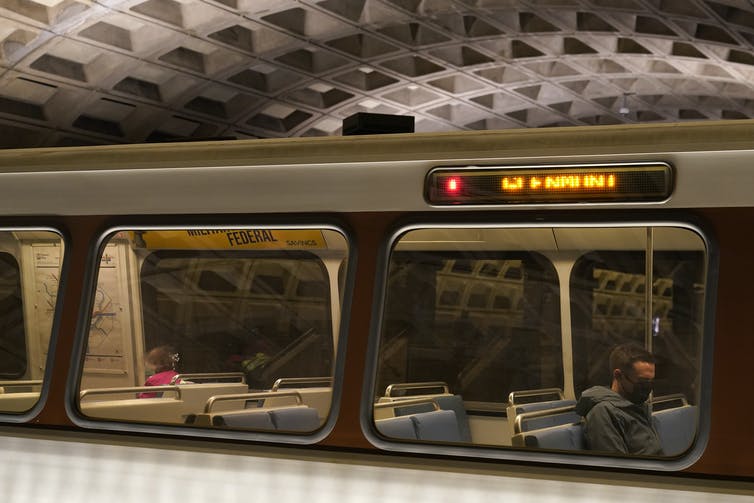 Passengers on a Metro train in Washington, D.C., on April 23, 2021. AP Photo/Patrick Semansky

Public transportation received a fiscal boost from the Coronavirus Aid, Relief, and Economic Security Act, known as the CARES Act, that Congress passed in March 2020. And President Joe Biden has proposed US$85 billion for capital investments in public transit in his infrastructure plan.

The details of potential investments are still taking shape, and much depends on congressional negotiations. But although the traditional American road and car mentality remains strong, the pandemic may have finally made clear that urban public transportation has a vital social and economic role in making cities fairer, as well as more efficient.

The increase in walking and bicycling during the pandemic was good news for many reasons. With less surface traffic, cities became quieter and less polluted. People could hear birds singing in many places for the first time and walk on streets free from busy traffic.

Cities traditionally plagued with gridlock, such as Boston, Dallas, Houston, Los Angeles and Washington, D.C., all saw less congested roads. But it’s not clear whether this will be a lasting change or a short-term response.

By mid-June 2020, while many states and cities were still under COVID-19 restrictions, traffic had rebounded across the country to almost 90% of pre-pandemic levels. Washington, D.C., was at 70% of its normal level, New York City was at 82%, and Los Angeles was at 85%. Now, as vaccines and the end of pandemic controls make people freer to move around, many cities are quickly returning to prior traffic levels.

Somewhat counterintuitively, having more cars on the road could actually improve safety. With more traffic, average speed may decline to safer levels.

However, distracted driving could offset this trend. We live in an age of distraction, where many people feel it is OK to drive while texting and tweeting. As traffic returns to pre-pandemic levels, cities and states will need to refocus attention on measures such as restricting cellphone use in cars.

Perhaps the most encouraging traffic-related news is that many cities are forging ahead with plans to reduce car travel and make streets safer for pedestrians and cyclists.

The pandemic offered a unique opportunity to reimagine the city as a place where drivers had to share space with others. This also was a trend that predated COVID-19 but accelerated in 2020 when streets were relatively empty.

But there are competing interests and political counterpressures. One survey of mayors found that many endorsed changes to street space, but relatively few were planning to make them permanent. City leaders realize that powerful economic interests want consumers and workers to have downtown access by private car.

The coming months could well be a key pivotal point. The pandemic gave Americans a tantalizing glimpse of what less car-oriented cities would look like. The pandemic saw the reclamation of urban streets for public use, the emergence of a less car-centric city and the reimagining of a safer, slower, quieter city with streets shared among a variety of users. But many interests want a quick return to the status quo.

The outcome will depend on how effectively urban dwellers and advocacy groups make their case for more people-centered city streets.