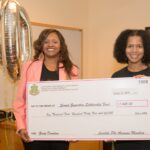 Lewis on campus in 1992. Photo courtesy of Lewis.

“To me, UMBC opened up the world,” says Tamara L. Lewis ’92, psychology. As a student, that meant joining Alpha Kappa Alpha Sorority, Inc., for instance, holding multiple jobs all around campus, and ultimately re-envisioning her career path.

Lewis began her studies focusing on industrial and organizational psychology. However, it was her many on-campus jobs—conference assistant, desk staffer, and student worker in the admissions office—that allowed her to realize that she was actually drawn to counseling. Working across campus let Lewis see how a university can support student success, so she began to explore how she could work with students.

Thirty years later, Lewis still feels a sense of real connection to the campus and actively works to help other alumni engage with students and the institution. And her career pathway has allowed her to continue to support students in the manner she first observed at UMBC.

The need to belong

Academic support has defined many aspects of  Lewis’s career and philanthropic life. After UMBC, Lewis received her master’s degree in counseling from Hampton University—UMBC President Freeman Hrabowski’s alma mater. She then began her career in the counseling center at Baltimore City Community College.

“Being in the academic realm got me thinking more about college student experiences,” she shares, and she started thinking about what structures exist to help young people succeed. She drew on lessons learned at UMBC that helped her understand the value of community and support in educating the whole student.

Lewis speaking at a CBLA event. Photo courtesy of the Alumni Association.

Lewis continued exploring the topic of academic success in her dissertation for her doctorate from Morgan University. After earning both her graduate degrees from Historically Black Colleges and Universities, Lewis understood the advantages of students feeling a sense of belonging while at school. Her own experience, along with research and alumni work, has shown her the importance of making students feel important and valuable within their community.

“Tamara was instrumental in creating the CBLA and leading events and initiatives that would speak to and acknowledge the unique experiences of our Black and Latine/x graduates,” says Stanyell Odom, director of Alumni Engagement. “Her love for UMBC is evident in the way she gives back her time, talent, and resources through the CBLA, the Alumni Board and her beloved sorority.”

In 1991, Lewis became a member of Alpha Kappa Alpha Sorority (AKA), one of the first historically Black sororities on campus. She remembers how important it felt to build community within the “small community” of Black students on campus. Through her student work in AKA, as well as her residential life involvement, she saw the value of supporting Black students to do their very best at UMBC, a vision that was shared through the administration, she says.

Now, nearly 30 years after joining her sorority, she continues to connect with members to support UMBC. In 2011, Lewis helped plan the first AKA Homecoming reunion. Anita Jackson ’80, health science and policy, then a member of the Alumni Association Board of Directors, and the Office of Alumni Engagement leveraged connections to the alumni community to make the event a success. AKA members have gathered at Homecoming every year since. The event also fundraises for the UMBC Second Generation Scholarship, which is dedicated to students who show a commitment to the advancement of minorities. In 2020, during the COVID-19 pandemic, the sorority sisters came together virtually in honor of the charter anniversary of their chapter.

“It’s important that people give what they can; even if it’s not money but time,”  Lewis says, emphasizing the value of expanding the ways alumni can support the UMBC community.

Integral part of the community

Now, as the state test security officer and the National Assessment of Educational Progress state coordinator for the Maryland State Department of Education (MSDE), Lewis continues to ensure students have everything they need to succeed on standardized testing. The Assessment Branch of MSDE works to create uniform and accessible testing standards so students, educators, and community members can best support students and address any gaps in education. Working in Baltimore City, Lewis understands the value of equitable testing practices so students can use every support available. Her continued curiosity about addressing gaps and building community has made her an integral part of the UMBC alumni community.

As a student, Lewis realized that being an active member of the UMBC community was the best way to get the most of her education. Now, she wants to help current students—who she sees as future alumni—realize how important it is to give back to UMBC when they do graduate. “When I tell people I went to UMBC, they’re impressed,” she says, which just inspires her to give back even more.

Header image: Lewis, right, at an AKA Homecoming reunion in 2014. Photo by Marlayna Demond ’11.