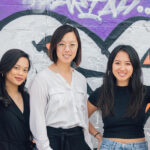 “Baltimore has so much amazing energy and people in it, doing good for it,” says Robbin Lee ’13, visual arts and media and communication studies. “It’s a shame that people don’t know more about that side of it.”

As executive director of Baltimore Homecoming, Lee gives back to the city that shaped her college years and has come to be her community. Launched in 2017 as an “alumni network” for Baltimore City, the organization brings back former Baltimoreans to spark connections with people currently doing work to better the city. The nonprofit has connected alumni like Food Network chef (and Retriever) Duff Goldman ’97, history, and WNBA All-star Angel McCoughtry with community leaders like Pastor Heber Brown of the Black Church Food Security Network and Founder and Executive Director of ¡Adelante Latina! Leonor Blum.

Lee working an event in Baltimore. Photo courtesy of Lee.

As a student at UMBC, Lee didn’t foresee herself helping direct a non-profit organization. Focusing on her passion for graphic design and art history, Lee expected to work in galleries and museums. So she began her career as the executive assistant for Maryland Art Place (MAP) after graduating.

However, after a cut to city arts funding forced MAP to let her go and she was struck by a car while riding her bike to her second job, Lee says she hit rock bottom. She turned to UMBC Associate Dean of the College of Arts, Humanities, and Social Sciences  Preminda Jacob for guidance on how to pick herself back up. Jacob gave Lee advice she still lives by today: keep moving forward, whatever moving forward means to you at that moment.

Jacob and Jason Loviglio, founding chair and associate professor of media and communication studies, emphasized Lee’s work ethic and success at UMBC in a 2019 recommendation letter. The pair called Lee “one of the most impressive and tireless advocates for the city of Baltimore and for UMBC that we have had the honor to know” and that she “epitomizes the very best of what a UMBC education means.”

It was Lee’s UMBC experience that led her to her community-centered work at Baltimore Homecoming. After her experience at a small town high school in Montgomery County, Maryland, UMBC was the first time Lee experienced a diverse community with different perspectives

“That’s when I actually started to care about my own Asian identity,” says Lee, a board member of UMBC’s Alumni Association. “So, I took that into how I build community around myself now.”

Lee further strengthened her ties to her identity through her senior capstone project on contemporary Chinese art produced by Millennial Chinese artists. This research won Lee the Undergraduate Research Award and allowed her to further her research studying abroad in Nanjing, China.

Besides strengthening her own identity, Lee’s time at UMBC fostered her connection with Baltimore City. While captaining and playing on the UMBC women’s volleyball team, Lee picked up shifts at the Inner Harbor’s Cheesecake Factory, where her relationship with Baltimore started.

Following Jacob’s advice to keep moving forward, in 2014 Lee took on the position of event director for Emporiyum, a food market that features local chefs, artisans, and more in D.C. and Baltimore. Then, she joined Capitol Riverfront Business Improvement District (BID), one of only two BIDs in D.C. to manage festival grounds within its jurisdiction.

Lee enjoyed her work but felt like it was becoming unsustainable—in 2017 alone, she planned and ran around 300 events. During this time, the co-founders of Baltimore Homecoming launched the nonprofit and asked Lee to join as deputy director. Lee jumped at the opportunity to return to Baltimore full time.

“I took it as a homecoming for myself,” says Lee. “I wanted to give back to the city that shaped me.”

Returning to Baltimore in 2017, Lee searched for a community of her peers like the ones she fostered at UMBC, both in the Asian American and Pacific Islander (AAPI) community and Black and brown communities. This search led her to become an advisor to the Baltimore Legacy Builders Collective, a Thread volunteer, and an organizing member of the Chinatown Collective. The collective holds events like the Charm City Night Market that highlight Baltimore’s AAPI’s voices through art, food, and education programs. Lee also became a founding member of the Baltimore Chapter of the National Association of Asian American Professionals, a nonprofit that uplifts and empowers Baltimore’s AAPI communities.

She sees this work as only increasing in importance with the rise in hate speech and hate crimes directed towards the AAPI community in the United States.

“It’s really strengthened my resolve to do the things I do both in work and outside of work,” says Lee. “People constantly tell me to take a break or to take a nap and I say ‘No!’ because I’m busy doing the things I want to be doing.”

Header image: Lee (center) with the other founders of the Chinatown Collective / Charm City Night Market. Photo by Perri Brierley-Bowers.