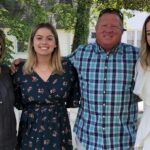 Katie Poteet, Shekinah Davis, and Nicholas Duy-Hoan Nguyen all came to UMBC grounded in their families’ unique journeys and deeply-held values, and seeking to find their own individual paths. Each Class of 2021 graduate has formed connections with communities, both in Baltimore and internationally, that have shaped their plans for the future.

Door to the world

UMBC Valedictorian Katie Poteet ‘21, global studies and political science, will soon head to the University of Cambridge, in England, to pursue a master of philosophy focusing on educational equity for women and girls in the Arab world. Given her path, one might assume she grew up with an array of international experiences, but Poteet is actually from a fifth-generation farming family from Harford County, Maryland. She and her twin sister, Madeline, are first-generation college students graduating from two University System of Maryland institutions, both pursuing careers in international policy.

Poteet was excited to attend UMBC as a member of the Honors College and a Sondheim Scholar. She had never experienced such cultural and linguistic diversity, and she jumped into learning Arabic and earned a certificate in Spanish. That led to internships focused on education policy, humanitarian work, and foreign policy in the Arab world at the Enabling Peace in Iraq Center (EPIC), Norwegian Refugee Council, and Brookings Institution’s Center for Universal Education.

In 2019, Poteet’s sister, who is graduating from Salisbury University, joined her on a trip to Ghana with UMBC’s Global Brigades chapter. While there they worked with local craftsmen to construct eco-friendly toilet facilities. Back in Baltimore, Poteet remained connected to the local community by teaching English to adults at the Esperanza Center, a resource center for immigrants.

While it was UMBC that connected her with diverse communities and global opportunities, she shares that her family and community in Harford County laid the foundation. Through them, she learned to always help others and work hard.

“Our parents did not have the opportunity to graduate from college, so they supported us in everything we wanted to do,” shares Poteet. “But what is most important, and what my parents are most proud of, is that we took advantage of all the opportunities college afforded us and are using those skills to help others.”

Shekinah Davis ‘21, M.A. intercultural communication, came to UMBC after her Peace Corps service in Ecuador to join UMBC’s Peaceworker Program. It was an opportunity to merge skills gained through her social justice, diversity, and equity work in the U.S., Dominican Republic, Nicaragua, Haiti, and Ecuador.

Davis with the her peers in the intercultural communication masters program.
Photo courtesy of Davis.

Davis’s parents moved from Portland, Oregon to the Dominican Republic when she was four five years old. Over the course of 15 years they built a public K-12 school. In her teenage years, Davis used photography to help document the process. It inspired her to earn a bachelor’s degree in photojournalism and document life in other Latin American countries.

Davis (center, wearing a pink dress) as a child in the Dominican Republic.
Photo courtesy of Davis.

She traveled to Nicaragua as a visiting artist, using photography and painting to build community with women healing from traumatic experiences. In Haiti, she photographed the daily life of women and their communities. During her Peace Corps service in Ecuador, Davis developed multimedia stories to raise awareness of refugees, migrant entrepreneurship, and family and youth health initiatives.

As a Peaceworker Fellow at UMBC, Davis has supported arts education in Baltimore City. She worked at UMBC’s Shriver Center as a program coordinator for the Charlesmead Initiative for Arts Education, as a media teacher for both the Kultur Stories program and Wide Angle Youth Media.

Davis (third from the left) and Nguyen (striped shirt) with other Peaceworker fellows in 2019. Photo courtesy of Davis.

With Kulture Stories, Davis guided students from Baltimore, Sweden, and South Sudan in collaborative learning activities to expand on their leadership and multimedia skills. At Wide Angle Youth Media, she helped students in the Baltimore Speaks Out program to produce the video series Black Lives Matter: A Conversation With Our Youth. In that series, students discussed topics of race, identity, and racism.

Davis’s childhood taught her to embrace the unknown. Her international work gave her an opportunity to use multimedia as a tool to explore social justice issues. And her experiences in Latin America gave her an awareness of the vast differences in cultures and languages grouped under the term Latinx, instilling in her a sense of pride in her identity as an Afro-Latina and African American woman.

Charlotte Kenniston, an LLC doctoral student and associate director of UMBC’s Peaceworker Program, notes that at UMBC Davis has continued to develop her sense of who she is in the world and how she might make an impact. “Shekinah has merged all of her life experiences to charge ahead with a life committed to work in diversity, equity, and inclusion,” says Keniston.

“I have traveled so much that I now have a desire to establish roots somewhere. I want to create impactful programming and training around diversity, equity, and inclusion locally,” says Davis. “Baltimore is that place for me right now.”

After graduating this week, Nicholas Nguyen, M.A. ‘21, sociology, will begin working as a program evaluator for the National Preparedness Assessment Division of the Federal Emergency Management Agency, a cause close to his heart.

As a son of Vietnamese refugees, Nguyen grew up listening to stories of his parents’ journey from Vietnam to Texas. His mom fled Vietnam in 1975. “My father wasn’t able to leave with the family. He was caught trying to leave and was detained for five years,” says Nguyen. “When he was able to leave Vietnam it was on a small boat with others, often drifting for days without food.”

Nicholas Nguyen (left) with his parents in the Galápagos Islands, Ecuador.
Photo courtesy of Nguyen.

Hearing about these experiences inspired Nguyen to explore how he could help improve the management of international humanitarian emergencies.

Seeking his first international experience, Nguyen joined the Peace Corps in 2015. Nguyen explains that his parents didn’t understand—for them, going to Ecuador to volunteer was leaving the safety and comfort they had worked so hard to give him in suburban Texas. But it was transformative for Nguyen. “I needed to have the experience of being an entirely different country, culture, with a different language to better understand their experience,” he says.

Nicholas Nguyen at a ceremony at the US embassy in Quito, Ecuador.
Photo courtesy of Nguyen.

While learning Spanish and the Ecuadorian culture, Nguyen worked with local governments and community organizations to implement a recreation and substance abuse prevention program for youth. He collaborated on a project with local women artists and supported a shelter serving women and children survivors of domestic violence. Nguyen also helped establish financial and computer literacy programs for women.

His time in Ecuador gave him a greater understanding of what it is like to be new to a culture and language, and the challenges that presents. “Now, when I run into someone struggling with English it reminds me of when I was walking around Ecuador with my dictionary, trying to connect with other people.”

Once he was ready to return to the United States, Nguyen joined UMBC’s Peaceworker Program because of its focus on placing Peace Corps volunteers with local organizations and its emphasis on social justice.

“I had never been part of a university whose work was centered around social justice,” says Nguyen. “The Peace Corps showed me how political systems work at an international level. UMBC’s Peaceworker Program is giving me an understanding from a social justice and antiracist perspective.”

Nicholas Nguyen with students from the Patterson Park Audubon Center in 2019.
Photo courtesy of Nguyen.

Nguyen was placed in the Patterson Park Audubon Center, teaching local middle school students, in a predominantly Spanish-speaking community, about climate change and how it is impacting birds and people. He didn’t yet know much about birding, but he knew what it was like to be new to something and could connect with the students through their heritage language. Nguyen narrated his experience by creating a digital story about his experience with nature throughout his life.

The program moved online temporarily due to COVID-19, but was later able to open in person with social distancing, making it more accessible to the greater community.

The reflection elements of the Peaceworker experience have helped Nguyen better understand the links between what he’s learned in his work with communities and in the classroom about policy, history, and race. He sees his next steps, through a career in emergency management, as emerging from his parents’ dreams, his own dreams, and all he’s experienced in Texas, Ecuador, and now Baltimore. And, he says, he looks forward to helping the United States become “a more just and inclusive place, especially now, as a public servant.”