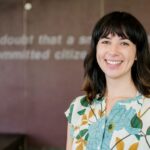 Each year, hundreds of Retrievers work with K-12 students and families across Greater Baltimore, providing tutoring, mentoring, introductions to new skills and interests, and supportive one-on-one connections. Graduating seniors David Ralph Williams, Celena Dang, and Emily Rose Paul took advantage of opportunities to work with Baltimore youth and families early in their UMBC careers and sustained those connections as long-term commitments. For each, these experiences have shaped their goals and career paths.

David Ralph Williams ‘21, M29, computer science, found the learning community he was looking for when he became a Meyerhoff Scholar. “Everyone was focused on working hard and having a deep understanding of their field,” says Williams. He loved both the academic rigor and the commitment his peers had to the community beyond campus.

Williams joined Creative Coders in his freshman year as a way to connect local middle school students with opportunities in computing. He supported students at Arbutus Middle School in learning basic computer science skills by working through group projects. “I wanted to help expose middle school students to computer science, something I wished I had growing up,” says Williams.

By his sophomore year, Williams became the lead student coordinator for the Creative Coders program. He shifted the program to be more student-led, enabling participants to choose their own project topics and their approach to managing and completing projects.

Creative Coders also worked with students at General John Stricker Middle School in Southeast Baltimore, focusing on the interests of the Robotics Club. “We exposed them to the computer science aspects of robotics like using motion sensors and programming a robot’s personality,” says Williams.

The value of teaching

Williams found himself excited to see the students work through a problem. He also discovered he had the patience and desire to explain concepts and procedures to students.

When he became a teaching assistant (TA) for an upper-level computer science class, Williams had the same experience. “It’s been nice being a TA for the data structures class. It’s a really difficult class,” shares Williams. “I thrive on the feeling I get when I explain things and see whether students grasp the concept. I use that exchange to guide whether I need to pick a new method or whether I need to explain in more detail.”

Celena Dang ‘21, psychology and biological sciences, comes from a family of Retrievers. Her aunt and several cousins have proudly earned their degrees at UMBC. That was an important factor in her decision to attend, along with the university’s great reputation for STEM education and diversity. At the same time, she wasn’t quite sure of the direction she wanted to take at UMBC once she was on campus.

Dang is grateful that UMBC offered the flexibility to explore various paths. “My advice to others who are uncertain about the major they chose is to not put pressure on yourself,” shares Dang. “It’s OK to question and to explore. Make the best of volunteer opportunities that can introduce you to different fields.”

Dang (second from the left on the first row) with the UMBC UNICEF board.
Photo courtesy of Dang.

For Dang, being a member of UMBC’s UNICEF student club for four years has offered an opportunity to learn about different careers in child welfare. A defining experience for Dang was when the club worked with UMBC’s Shriver Center to develop a partnership with The Children’s Home in Baltimore City. The group provided academic support to youth living at The Children’s Home, an organization that provides housing to children in foster care who have experienced abuse, neglect, violence, and abandonment, or are in need of supervised care.

Dang explains that in the beginning the teenagers she worked with were skeptical and remained distant. But within a month of the club visiting weekly, they began to trust the UMBC students, becoming more social, engaged, and open to accepting support. In time the Children’s Home organization’s leaders reported students’ grades and self-esteem improved.

While working with youth at The Children’s Home, Dang was also taking psychology courses. She realized she had a great interest in adolescent mental health as a career path.

“UMBC’s UNICEF club has been the most rewarding part of being at UMBC,” says Dang. “Finding a community that has the same shared values as me and the same mission to give back to the community has shaped my career goals.”

Emily Rose on her first day at UMBC.
Photo courtesy of Rose.

WhenEmily Rose Paul‘21, global studies, came to UMBC, wanted to invest time working with Baltimore’s immigrant community. “I think everyone should have the same opportunity my grandparents had when they left Europe,” she says. “If they had not been welcome in the United States I might not be here today because they were Russian and Polish Jews.”

It was through the encouragement of her mentor, Zuriel Herran ‘20, geography and environmental studies, that she became a volunteer with youth at the Esperanza Center, an immigrant resource center in Baltimore City, teaching English as a second language. She loved the work so much she spent the next three years working at the center and became the lead student coordinator for the program.

Paul (back row, fourth from the left) with other Esperanza Center volunteers in 2019. Photo courtesy of Paul.

Paul transported UMBC volunteers to the center, guided them in self-reflection, and provided teaching strategies, in addition to helping with administrative tasks. She also took her leadership work to another level through a Shriver Center internship leading the Center’s student coordinator program. She provided fellow students who were leading service-learning partnerships with tools and resources.

Finding answers in the humanities

In addition to her work with The Shriver Center, Paul worked alongside seven other students as a fellow in the PLACE Colaboratory, which stands for Partnerships for Listening and Action by Communities and Educators. They worked under co-investigators Felipe Filomeno, political science and global studies, and Romy Hübler ‘09, modern languages and linguistics, M.A. ‘11, intercultural communication, and Ph.D. ‘15, language, literacy, and culture, who is assistant director of UMBC’s Center for Democracy and Civic Life.

As a fellow, Paul worked with students at Benjamin Franklin High School in Baltimore City on a visual storytelling project. She helped them further develop their humanities-based research methods for the project, focused on identifying and addressing community issues.

After graduation, Paul is planning to continue working with immigrant communities, focusing on the promotion of rights in the U.S. and abroad. She is thankful for all the people she met through community partnerships, and for opportunities to grow in her Spanish skills and knowledge of immigration rights.

Paul (center in jeans) studying abroad in Colombia at a dance festival. Photo courtesy of Paul.

“I was able to access excellent research opportunities in the humanities that I never thought would be available at the undergraduate level,” says Paul. “UMBC is known as a STEM school, but I have received the most amazing humanities education as a global studies student. You will be surprised at all that you can find here.”