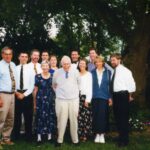 In the late 1960s, Bob Bolton ’70, mathematics, caught glimpses of his mother around UMBC’s new relatively small campus. While he was heading to or from class, he’d spot her in the French Department, where Elinora Bolton ’70, French, was getting her undergraduate degree, or in the library, studying.

“It was quieter than at home,” Bolton says, laughing. He had nine brothers and sisters, and most of them still lived in their Elkridge home at the time.

In spring of 1970, Bob in his cap and gown followed his 52-year-old mother, in her own commencement regalia, across the stage. Mother and son were awarded their undergraduate degrees in the same first graduating class of UMBC.

“I was so proud of her,” said Bolton, the second son in the family and now the chief executive officer of an actuarial firm. “I didn’t really appreciate then how hard it was for her.”

A tribute to the matriarch

In 2018, Bolton wanted to honor his mother, and all his family. So he endowed the Bolton Family Scholarship, to support two students annually in UMBC’s Individualized Studies Program (INDS), with stipends of $1,000 a semester. “Education was the most important thing” to his parents, Bolton says, though they were agnostic about their fields of study. “They gave us no particular direction, they just made sure we were well educated.”

Bolton explains that he chose to give the scholarship to INDS majors to reflect the breadth of interests of the Bolton family members who attended UMBC, studying everything from math and music to French, sociology, and geography.

“The INDS program is grateful for the generosity of the Bolton family,” says Carrie Sauter ’96, psychology, INDS assistant director. “Their commitment to support the INDS student community offers a wonderful family tribute of hard work and success.”

Born into Baltimore society in the elegant townhouse that is now the Brewer’s Art restaurant, Elinora Bowdoin moved to France at age 7 with her mother and sister after her parents’ divorce, according to Steve Bolton, her son and family historian. At 18, Elinora was presented in a flowing white dress to King George VI, Steve says. She studied at the Sorbonne in Paris for 18 months, but the onset of World War II and her mother’s death interrupted her education.

Elinora and her sister returned to Baltimore in 1939. “Feeling foreign” and a bit at sea, Steve says. The sisters kept themselves busy with becoming nationally ranked as tennis doubles champions, and attending balls at elegant locations, such as the Alcazar Hotel (now the Baltimore School for the Arts), where Elinora met her future husband in 1940.

Elinora and Robert Bolton in an undated photo.

Robert Harrison Bolton was a pilot in the Army Air Corps and married Elinora on a three-day pass. Their first child was born in 1944, and for more than 20 years, Elinora stayed home to raise her children. The family remembers her as an energetic mother, an indifferent cook, and an avid reader.

“She did have the life of the mind,” Steve says.

The same year her tenth and final child entered kindergarten, Elinora started at UMBC. Her records from the Sorbonne were lost in the war, so she began again at the beginning. Almost tripped up by having to kill and dissect a frog in a biology course, Elinora persevered for four years while her “well-trained” children looked after one another when she was on campus, Bob says.

After her graduation from UMBC, she remained close friends with May Roswell, a UMBC founder who established the modern languages department. Elinora went on to earn her master’s degree in French literature at the University of Maryland, College Park, and teach for decades at UMBC, College Park, and Catholic University. She died in 2012 at the age of 92.

Following mother and son’s trailblazing graduation, the family has established a legacy at UMBC. In 1975, Chris, another of Elinora’s sons graduated with a degree in sociology, and in 1986 her two youngests, Andy and Jim, graduated together with degrees in music and sociology, respectively. Her granddaughter Erin Bolton, geography, graduated from UMBC in 1999.

Education is a family tradition. At their childhood home, complete with a family goat and all those siblings, the brothers remember their mother’s books and papers spread out on the dining room table, evidence of her life of the mind. But mostly Elinora studied outside her house. It was quieter.

Header image of Elinora Bolton with her husband Robert and their 10 children in 2002. All photos courtesy of the Bolton family.