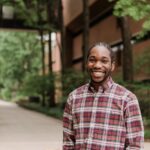 Jordan Troutman ’21, M29, computer science and mathematics, first discovered algorithmic fairness during a summer research program at Rutgers University after his first year at UMBC. The field focuses on how computer algorithms, such as those responsible for facial recognition or the content in our social media feeds, can foster fairness or unfairness. The effects include anything from attempting to identify someone who committed a crime to curating the content we see in ways that influence how we think about others.

“Because these algorithmic systems are being used to make a lot of life-changing decisions,” Troutman says, “now we have to make sure that the tools and technologies we’re developing have some type of guarantees or safeguards to make sure that they don’t have unintended consequences towards minority groups specifically, or just any unintended actions.”

When Troutman returned to UMBC from his summer at Rutgers, he sought out James Foulds, assistant professor of information systems. He’s researched these issues under Foulds’s mentorship for the past three years.

This fall, Troutman will take his research interests to Stanford University, where he’ll pursue a Ph.D. in computer science as UMBC’s first Knight-Hennessy Scholar. The international Knight-Hennessy Scholarship is open to students applying to graduate school at Stanford in any area of study. In addition to funding, it offers robust leadership and community-development training. Troutman was selected as exemplifying the scholarship’s core values: independence of thought, purposeful leadership, and civic mindedness.

In the 2019 – 2020 academic year, Troutman represented the student perspective as a voting member of the Maryland Higher Education Commission (MHEC), which establishes policies for every college in the state. At UMBC, Troutman took on leadership roles in the Student Government Association (SGA), the National Society for Black Engineers (NSBE), and as a teaching assistant and tutor supporting fellow students. In 2020, he received another prestigious honor, the Barry Goldwater Scholarship.

Jordan Troutman, left, and Dan Barnhart, former director of The Commons and student life at UMBC, who recommended Troutman apply for the MHEC position.

Troutman is a Meyerhoff Scholar and a member of the Honors College, and he’s one of two UMBC valedictorians for 2021. In addition to Rutgers, he’s conducted summer research at the University of California, Berkeley and in the Fairness, Accountability, Transparency, and Ethics (FATE) research group at Microsoft. Troutman has also been involved with UMBC’s Center for Democracy and Civic Life (CDCL), and he counts its director, David Hoffman, among his mentors.

“Jordan embodies the kind of creativity that transcends disciplinary boundaries, and has found dazzling ways to weave his social concerns into his scholarship,” Hoffman shares. “I’m confident he will thrive in the Knight-Hennessy program, and that we will have many more occasions to celebrate his civic contributions.”

Participating in leadership has also given Troutman the chance to get to know other leaders. His experience with MHEC demonstrated what true leadership looks like. “It’s really powerful to see how—when you are passionate about something, and you care about the people, and not the power or the position—you can do good work and effect good change.”

From intention to impact

With the Knight-Hennessy Scholarship, as well as a highly competitive Graduate Research Fellowship from the National Science Foundation, Troutman will have the freedom to pursue research of his choice at Stanford. He values the opportunity to be creative in his approach and thinks of his research as “computational social sciences”—interdisciplinary by definition. His computer science and math courses have prepared him for the work; so have courses in the liberal arts and his experiences with campus engagement.

Elective courses in philosophy “helped me understand broadly how to articulate these non-quantitative concepts,” such as fairness, Troutman says. A particular Honors College course about how the media uses faces and how we internalize what the faces represent stuck with him.

Social media algorithms “are everywhere. So if these algorithms are unfair in any way, then the way we’re consuming this media may not necessarily be representative of the world we live in,” Troutman says. “I think that’s a super important problem, and because I’ve taken these other classes, it’s given me a broader context of how important this problem is and has reaffirmed my interest in doing this kind of research.”

Troutman is looking forward to collaborating with the other Knight-Hennessy Scholars on some of these big ideas. He also appreciates the leadership training offered through the program, which he sees as being about “trying to figure out how to be a well-intentioned person, and then making really good work out of what your intentions are for the world.”

Troutman shares that several UMBC experiences were instrumental in helping him build his confidence and understand the powerful difference he can make.

Roles in SGA and participating in UMBC’s STRiVE student leadership retreat and Alternative Spring Break “helped me understand my own sense of agency and my ability to make an impact,” Troutman says. He realized that solving massive, intimidating problems often starts with a single person, and says, “Learning that has just made me believe that I literally could do anything.”

The Meyerhoff Scholars Program helped him internalize some of the same ideas. “Meyerhoff gave me this idea that you can really make a change in your life,” Troutman says. “You can be whoever you want to be. You just have to be active about it and to believe in yourself and use the support and community around you to get where you want to be.”

NSBE also played a role in Troutman’s growth. NSBE “helps students feel that they belong in science,” he says. “It’s helped to center me and to help me really understand what it means to build community. Now, I hope to go and help to foster more communities at these other places that I go in my life.”

And Foulds, his research mentor, “has given me really good insight, perspective, and guidance on how to do research, think about problems, and especially how to overcome a lot of different pitfalls that happen in research,” Troutman says.

All these programs, communities, and experiences are representative of the culture at UMBC, Troutman says. “You can really be yourself and be engaged and very intentional with people, and you can be as cool or kooky as you want—there’s a space for you at UMBC,” he says.

In the Knight-Hennessy application process, students submit a video addressed to their future Knight-Hennessy cohort. “Jordan’s video demonstrated how to do a gymnastics flip. Not the kind of thing you’d expect from a computer scientist—but it was a way to showcase his other interests and let his personality shine,” April Householder, director of undergraduate research and prestigious scholarships, observes. “Lately, UMBC has been winning very prestigious scholarships, and I think part of the success has to do with encouraging our students to be themselves throughout the process.”

“I think that’s the beauty of this school,” Troutman shares. “You can be whoever you want. And it’s not just something that you say to get people in here. It’s like, no, they’re actually backing it up with the things that they do. It’s really about the students.”

For Troutman, his research, civic engagement, and leadership are all about one thing: making positive social change.

“While Jordan was working in my lab, I was gratified to see his enthusiasm grow as he realized that his technical research could be a part of the efforts he was already making toward creating positive change in our society,” Foulds says. “Jordan is on a path toward becoming an ethical leader and a thought leader who can help steer the course of progress in AI technology in the right direction.”

Ultimately, Troutman says, “What I want to do is just help people see their ideas come true.”