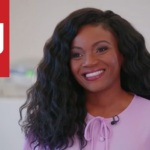 Kizzmekia Corbett ’08, M16, biological sciences and sociology, is the lead scientist of the research team that developed the Moderna COVID-19 vaccine at the National Institute of Allergy and Infectious Disease (NIAID). She returned to campus April 2 for an interview with CNN. From a lab in the Interdisciplinary Life Sciences Building, Corbett spoke about the impact of UMBC and the Meyerhoff Scholars Program on her success.

“Had I not been exposed to Dr. Hrabowski and the Meyerhoff Program…I’m not even so sure that I would be a scientist. It’s really about exposure and resources given to people,” Corbett told CNN. In particular, encounters at UMBC that led her to double major in biological sciences and sociology uniquely prepared her for this moment, when the country is witnessing both an urgent need for cutting-edge science and the effects of widespread health disparities.

The juxtaposition of the reckoning around racial discrimination and the pandemic’s disproportionate effect on people of color “really came together and put a burden on me in so many ways, and it made me more motivated around what I needed to do as far as getting this vaccine out,” Corbett told CNN. “I think as I have looked back on the pandemic, and my work and my team’s work in the pandemic, I feel like it was my purpose, almost.”

Corbett also understands the importance of approaching vaccine hesitancy with empathy. “I think there is really nothing that you say. It’s really about listening,” she said in the interview. “There is a subset of people who just haven’t been listened to around their health issues and around technology, really. And I just felt like it was time for me to sit down and empathize with an entire group of people who had been ignored.”

Corbett is hopeful for a new generation of diverse scientists. “I think it’s been exciting to be able to be an inspiration,” she says. “I’m happy to be visible if it means that more people understand the science behind this vaccine and for vaccines to come.”