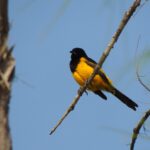 On a low-lying island in the Caribbean, the future of the critically endangered Bahama Oriole just got a shade brighter. A new study co-led by Michael Rowley ’18, M26, biological sciences, estimates that there are at least 10 times as many Bahama Orioles as scientists previously thought.

Rowley and colleagues are sharing the findings with Birdlife International, the organization that makes recommendations to the International Union for the Conservation of Nature (IUCN) about birds on its Red List of threatened species. The findings may influence IUCN to down-list the Bahama Oriole from critically endangered to endangered.

The research team surveyed roughly 25 percent of Andros Island in the Bahamas, the only place these birds live. Their data indicate that somewhere between 1300 and 2800 of these striking black and yellow birds exist in that portion of the island, suggesting that the overall population is likely several thousand. Older studies estimated the entire population at fewer than 300.

The new result “is a step forward for conservation,” Rowley says. “This makes the world a bit more informed about what we should be putting our efforts toward. There are other birds that could use attention as well.”

Michael Rowley and Alexis Scarselletta ’16, biological sciences, with a Baltimore Oriole at Patapsco Valley State Park in Maryland in 2016. Photo by Kevin Omland.

Rowley’s results are the latest in a string of important discoveries led by undergraduates mentored by Kevin Omland, professor of biological sciences.

For example, earlier work had assumed that Bahama Orioles primarily nest in human-dominated habitats. But in 2018, Daniel Stonko ’17, biological sciences, upended that understanding of Bahama Oriole ecology. Stonko and colleagues reported the first three Bahama Oriole nests ever recorded in the pine forest, which is the most common land habitat on the island.

“The orioles seem to be able to nest in quite a few different habitats, which is really good for the orioles and important to know,” Omland says. The new habitat information will also be important for local conservation efforts led by the Bahamas National Trust (BNT), which has been a key partner to Omland’s research group throughout its long-standing work in the Caribbean.

“If the BNT is able to create or expand national parks, they might try to include more of the pine forest with these tall thatch palm trees in the understory,” Omland says.

A Bahama Oriole perches in a pine tree on Andros Island in the Bahamas. Photo by Matthew Kane ’19, biological sciences.

In addition to being a win for the orioles, the students’ research projects were a touchstone of their UMBC experience.

“Being in Kevin’s lab is amazing, because he really lets you take charge and get to do everything,” Yancy says. “He starts you out with small tasks to get acquainted with a project, and then he has you doing your own research project. He has you doing statistics and applying for your own grants—which is a huge important skill in this field—and then ultimately publishing in peer-reviewed journals.”

For Yancy, doing fieldwork abroad was another big part of the experience. “We were constantly interacting with the local people and talking to them to find birds and show us nests that they’d seen,” she says. “That experience impacted me in that I want to find a position with that flexibility where I can still engage with people, do research, and write.”

Today, Yancy is in a master’s program offered through Miami University of Ohio. She spends most of her time in Maryland on the Chesapeake Bay, however, because her thesis focuses on coastal ecosystem conservation.

At the same time, Yancy has been serving with AmeriCorps at Rock Creek Park in Washington, DC. She conducts historical research and engages with the local community to develop historical hikes. She just accepted a new position as an environmental management staff member at the Chesapeake Research Consortium, where she supports the Chesapeake Bay Program’s diversity work group.

Rowley has been equally influenced by his time with the Omland lab. Joining the lab “was one of the best decisions I ever made, because right off the bat Kevin involves you in field work,” he says. “You’re out learning how to use the tools, being involved in a lot of the coolest aspects of the research.”

For Rowley, his first research trip to the Bahamas was also his first trip outside the lower 48 states. “It was an incredible privilege,” he says, “and it really opened me up to my current interest in conservation work and wildlife biology.”

Today, Rowley is a master’s student at Villanova University. His research focuses on how Carolina and Black-capped Chickadees interact. The two nearly identical species interbreed in a narrow band where their ranges overlap. That territory snakes from Iowa east to southern New Jersey and is moving ever-northward due to climate change.

“The undergrad research scene at UMBC is just so rich and involved,” Rowley says, “and I really appreciate that for letting me get as far as I’ve gotten with it.”

Kevin Omland, rear, goes birdwatching on campus with some of his students. Photo by Marlayna Demond ’11 for UMBC.

Giving undergraduates real, impactful research opportunities is a pillar of Omland’s work. After his first research trip with students to Puerto Rico in 2013, “It was so clear that the opportunity to do international field research was transformative for them as individuals and as scientists,” he says. “I just wanted to be involved with that more, and it’s worked out very well.”

The Bahama Oriole Project in particular has been a wonderful source of student projects. “It’s fun with something like this, because we know so little, that doing even very simple, elegant experiments can tell us really important things,” Omland says. “There’s 97 things we need to know right now, so when a student comes in, you have a lot of different choices to pick a project that fits their interests and skills.”

Students in the lab are pursuing a range of majors, such as biological sciences, environmental science, geography, and statistics. They each contribute their own expertise, from mapping habitat on the island, to counting birds, to running analyses of the data. The UMBC students have also had the chance to collaborate with Bahamian students.

And, Omland emphasizes, “Everything up to now with this project has been undergraduate-driven. The students have found the nests on their own, mapped the roads… A lot of these roads, I’ve never been on. UMBC students found them, mapped them, and went out and did the counts on them.”

Yancy and Rowley attest that their work with Omland has indeed been transformative. Yancy’s research “ended up being a perfect experience, and it definitely has influenced me going forward,” she says. “I’m more confident in myself.”

She also shares that she’s learned “I love to do research, and I have a passion for community science—getting other people involved in science and caring about the environment—so that’s what I’m looking for in my next position.”

Rowley reflects on his most recent paper. “How many people get to work on a project when they’re an undergrad that has such a real world outcome, while also being able to do field work, and work with animals, and get involved in the community?” he says. “It’s really great to know that the work we’ve done is having such an exciting impact.”

Banner image: A Bahama Oriole perched on a branch. Photo by Matthew Kane.