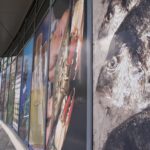 Six UMBC faculty members have just received grants from the Maryland Industrial Partnerships (MIPS) program to develop new technologies with potential to grow the state’s economy. This is UMBC’s largest number of winning proposals within a single proposal round since MIPS began in 1987.

Vakharia partnered with Mary Larkin, founder and CEO of Gaskiya Diagnostics, on a high-impact aquaculture project. The pair worked to develop a proposal for rapid, low-cost, easy-to-use diagnostic tests to protect and support aqua-farm production.

Larkin received her Ph.D. in marine biotechnology from UMBC in 2018. She was supported by research funding through MIPS as a graduate student at the Institute of Marine and Environmental Technology. She now serves as an industry partner through the program.

Institute of Marine and Environmental Technology

According to Larkin, “Low-cost, on-site tests enable aqua-farms to rapidly identify pathogens, allowing them to monitor disease and take actions to protect their crop.” Gaskiya’s initial focus for this testing is Whiteleg shrimp production facilities, which have an average of more than $4.5 billion in losses annually from disease.

“Farmers need to test their ponds and get instant information so that they can quickly take action and mitigate disease,” says Larkin.

Larkin describes Vakharia as a “perfect match” for her collaborator on this research. Vakharia’s background is in viruses that impact organisms important to aquaculture, including shrimp.

For this project, Vakharia notes, “I first had to identify the target. With the target, I can make a protein that Larkin can use to detect those pathogens in shrimp.” He explains, “This protein is a critical first step in making a non-animal-based binder that detects the pathogen.”

The team plans to incorporate the proteins and binders into a paper-based test. The test will provide results in minutes, similar to a pregnancy test.

Aqua-farms’ current tests for similar pathogens must be done through a lab. This results in an elongated turn-around time and average cost of $50 per sample. Gaskiya Diagnostics hopes to price the new diagnostic test at $5 to $10. The test results will be available in as quickly as 10 minutes. No expertise or additional equipment are required to perform or interpret the results.

Joshi, professor and chair of computer science and electrical engineering, received a MIPS grant for a cybersecurity collaboration with the startup CyDeploy. They are developing a platform that automates the quality assurance process for cybersecurity updates made to IT and “internet of things” (IoT) devices like Amazon Alexa, Google Home, and health and medical devices.

CyDeploy CEO Tina Williams-Koroma ‘02, computer science, presented Joshi with the idea to develop a “cybersecurity-driven change management system.” The technology is based in and leverages the use of artificial intelligence and machine learning to create a cloud-based replica of a company’s systems.

From prototype to launch

Williams-Koroma and Joshi’s group at UMBC developed a conceptual prototype. It shows the infrastructure and technology that would make the system feasible, combining off-the-shelf tools with novel research.

“Increasingly, the government is now beginning to mandate security requirements around IoT devices. The longer-term vision that CyDeploy has is capturing the state of these systems, virtually recreating them and then running the security changes against virtual versions to see how the changes would affect those systems,” Joshi adds.

Joseph Naft, director of the MIPS program, is excited about the tremendous potential of these projects. The long-term vision is creating additional high-quality jobs in Maryland. “We do this,” he says, “by bringing the expertise of faculty and students to bear on technology issues in product development for companies within the state.”

Since its inception, the MIPS grant program has had a $42 billion economic impact on the state of Maryland and has created nearly 22,000 jobs. UMBC’s incredibly strong results “speak well to the engagement of UMBC’s faculty with commercially viable products and technologies,” says Naft.

Dean Drake, associate vice president for research at UMBC, credits these results to the “expansive pool of talent” at UMBC and across all of the University System of Maryland.

“Helping our industry partners solve their challenges is a great strength of both UMBC and USM institutions more broadly,” says Drake. “Our talented faculty, students, staff, and alumni have expertise in every discipline that’s out there.”

These results also demonstrate UMBC’s “interest in working with companies in the state” for the benefit of all Marylanders, Naft notes, and UMBC’s robust potential for future growth.