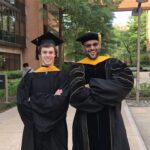 Quantum computers have the potential to revolutionize communications, cybersecurity, and more, by dramatically speeding computation, researchers say. But as Sebastian Deffner notes, “Even quantum computing has shortcomings.”

There may be ways to work around some of quantum computing’s limits, however, further enhancing its speed and other aspects of performance. Deffner, assistant professor of physics at UMBC, and Nathan Myers, a Ph.D. student in Deffner’s research group,will explore techniques to do that with a new three-year, $300,000 grant from the National Science Foundation. And in the process, they just might redefine the fundamental laws of physics.

From paper to the real world

Typically, the quantum systems Deffner’s group (and anyone else) have studied are linear, meaning they are defined by mathematical equations that appear as a line when graphed. However, Deffner says, based on the math, “non-linear systems have very unique capabilities that allow you to circumvent many of the standard problems of linear quantum computing.”

A two-line proof in the grant proposal shows that in theory, non-linear systems can operate much faster than linear quantum systems, and possibly perform better in other ways, too. “Now the question is,” Deffner says, “is that just something you can write on paper, or does it actually play a role in applications?”

Because it doesn’t matter how fast a system could be in theory, if, to go that fast, most of the energy input is released as heat instead of being used for computations. In that case, the total energy required to get anything useful accomplished makes operating such a device impractical in the real world.

That’s why Deffner’s research group focuses on a burgeoning new field known as quantum thermodynamics—the study of the relationships between heat and other forms of energy in quantum systems. Previously, they developed and refined the idea of the “quantum speed limit,” which quantifies the limits of linear quantum systems. Now they’ll expand that work to non-linear systems.

The beauty of math

So, why is it that most of the quantum systems researchers have studied are linear? And where do non-linear systems come in?

Well, quantum systems are composed of many particles that are constantly interacting with each other in a linear fashion. Unfortunately, it’s impossible to precisely define and measure all of those interactions using today’s technology. It is possible, however, to approximate the sum of all of those linear interactions. That approximation can be added to the linear equation describing the overall system as a single term. And here’s the catch: That term is non-linear.

UMBC’s Physics Building stands on the left, fronted by a quad dusted with snow. Photo by Marlayna Demond ’11 for UMBC.

By accounting for these particle interactions, “we can potentially get a non-linear speed-up from an underlying linear system. That’s the goal,” Myers says. But—and here’s where the thermodynamics comes in—“Say we get this non-linear system,” Myers says. “What energy cost are we paying for it? Is it worth it?”

So a goal of the new project is to better understand the thermodynamics of these non-linear systems. The findings would help quantify how much faster they might be than linear quantum systems, and if it would be feasible to create and run them in the real world.

The shift from linear to non-linear systems might seem incremental, but it’s actually monumental. Sadi Carnot, a French engineer, developed the field of thermodynamics in the early 19th century to describe steam engines. Then, in the late 20th century, researchers overhauled his foundational principles to apply them to linear quantum systems.

“We have all these statements of thermodynamics that we just recently formulated for quantum systems,” Deffner says. But non-linear systems are so different that another retrofit won’t be sufficient. “What we need to do is go back to the beginnings of quantum thermodynamics and just redo everything.”

They’ll start by developing three foundational mathematical statements describing the non-linear systems. “Those statements will build the foundation upon which we then can build the whole theory,” Deffner says. They’ll test their work on two major algorithms used in database searches and encryption technology.

“Hopefully our work will lead to a broader exploration of how non-linear systems in general can be used to speed up a whole range of quantum devices, or enhance their performance in other ways,” Myers says.

During the pandemic, the research group is on four continents and in “I don’t know how many time zones,” according to Deffner. “I told my students from the beginning that we would have to adapt,” he adds. The lab group stays in touch via Slack, WhatsApp, and weekly group meetings. But the work itself is surprisingly low-tech.

“The majority of it is pen and paper,” Myers says, plus a lot of reading. “Doing good theory work requires having a really broad knowledge base of what’s being done in different disciplines of physics. Real progress happens when someone realizes that a technique or tool from another area is also applicable to their own problem.”

Myers loves the work, and says his entire thesis grew out of a single question he asked Deffner after class one day. Deffner’s response? “That’s a great question. Want to do a project?”

“It all started with one root question that’s then grown a lot of different branches,” he says. “That’s one of the things that makes it so exciting—you’re following this train of thoughts. You’re pulling at the thread in the sweater, it’s unraveling more and more, and you’re seeing how many different things can grow out of this single question. It’s exciting and it’s fun.”

In the process of having fun, Myers and Deffner will reformulate thermodynamics for non-linear quantum systems, figure out whether building them is feasible, and get an idea of what their perks might be. Deffner’s team just might also come up with something revolutionary.

Myers tells the story of Carnot, who, in an attempt to optimize the disruptive technology of his day, ended up conceiving the laws of thermodynamics. “By trying to determine the most efficient steam engine possible, he ended up deriving perhaps the most fundamental law in all of physics,” Myers says.

“Now we’re in a similar position to Carnot,” he suggests. “We have this new disruptive technology that’s emerging—it was steam engines for him, quantum devices for us—so let’s do the same thing, and hope something really incredible falls out of it.”