An Act of Kindness Inspires a Legacy 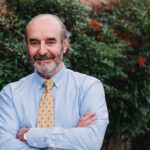 In 1977, Ricardo Zwaig was nine credits away from completing his degree in Spanish at UMBC. Instead of working toward graduation, he had dropped out and was working at a pharmacy near campus, trying to decide what his next move would be.

That next move came in the form of Louis Kaplan, then interim Chancellor of UMBC, walking up to the counter waiting to be rung up. Zwaig couldn’t have known at that moment that the trajectory of his life was about to irrevocably shift.

“I immediately recognized who he was and asked how things were going at UMBC,” says the Honorable Zwaig, now a judge for the District Court of Maryland in Howard County. “After learning that I had been a student at UMBC, Dr. Kaplan found it inconceivable that I was so close to graduating just to throw in the towel.”

Economic hardships had made it nearly impossible for Zwaig to pay for his final semester. In his mind, he was already in work mode. Just one day prior he had interviewed for a job at a lumber yard, having already completed orientation there. Whatever he needed to do next, he thought to himself, it had to produce enough money to live off.

However, speaking with Kaplan about his circumstances as a former student stirred something in Zwaig. “After some more small talk about my situation, Dr. Kaplan told me to call him if I needed help finishing school,” he remembers.

By week’s end, Zwaig was face-to-face with Kaplan’s secretary asking to see him.

Good luck, good karma, whatever you want to call it, Zwaig says, he found himself on the receiving end of generosity and good faith that set him on a whirlwind path to a remarkable career. His meeting with Kaplan instantly became the cornerstone of his time at UMBC—to which he always comes back all these decades later.

Kaplan handed over a check that covered Zwaig’s last semester’s tuition and put Zwaig in touch with a scholarship service in Baltimore. In 1981, in recognition of Kaplan’s contributions to UMBC during his tenure, the Student Government Association established the Louis L. Kaplan Scholarship Fund—an endowment that offers financial support to academically gifted students close to finishing their degrees.

“He covered my tuition, my books, everything,” says Zwaig. “I don’t know why I deserved such kindness and generosity from Dr. Kaplan, but it’s something I have never forgotten and it’s something I’ve always tried to repay in some way.”

Zwaig, along with his brother Michael Zwaig ’81, history—also a lawyer—have been key donors and vocal supporters of the Esperanza Scholarship Fund, established by a group of alumni in 2010. Awarded to full-time undergraduate or graduate students of Hispanic or Latine/x/a/o descent—or those committed to the advancement of minority students—the scholarship provides students with the kind of financial support they need to continue their studies and not feel the economic pressure of having to drop out. Since its launch, the Esperanza Fund has been awarded to 15 students.

“The scholarship may not exactly level the playing field, but it sets the stage for equitable opportunities,” says Zwaig. “It was important for me to be a part of its success after experiencing firsthand the difference someone’s generosity can make.”

Kaplan’s unexpected mentorship and financial support opened doorways for Zwaig to pursue his passion for law—a passion that was admittedly tinged with a bit of romanticism.

“I wanted to practice civil rights law,” he says with a hint of a smile in his voice.

Zwaig earned his J.D. from the University of Maryland in 1982. In 1983, he was admitted to the Maryland Bar.

Civil rights law wasn’t exactly where Zwaig ended up, but he thrived in trial work. After practicing law for 27 years, he applied for judgeship and won it in August 2010, making him the first Latino male judge in the history of the state.

“UMBC has always been positioned to produce great future leaders,” says Zwaig, and the proof is in his life’s trajectory. “My ongoing contributions to the Esperanza Fund are just a small way to ensure those leadership opportunities are just as readily available for minority students.”