Making a Path to Mentorship 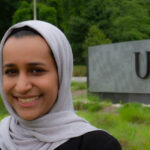 When Ashwag Alasmari, M.S. ’15, Ph.D. ’21, information systems, was pursuing her undergraduate degree in Saudi Arabia, she was breaking new ground in many ways. The computer science department at King Khalid University had just opened to women. Alasmari herself was one of the first women in her family to seek a degree.

Two things stuck out to Alasmari as she blazed this path: she noticed how few opportunities existed for her to connect with her peers outside of the classroom and she realized that as “the first” in so many of her endeavours, she would have a hard time finding like-minded mentors.

Alasmari attended a Google student retreat where she was part of the “Women Techmakers Scholars” group.

At her university, Alasmari wanted to find a supportive community of women with similar interests and goals, but programming to encourage this among students did not exist. Alasmari says there wasn’t really a reason to spend time on campus except to go to classes—which were separated by gender. “I think at that time the most significant obstacle I encountered was a lack of role models and mentors who could inspire me,” she says, looking back on her time as an undergraduate student.

Now only a few months away from finishing her Ph.D. at UMBC, Alasmari says her experience as a student in Saudi Arabia inspired her to build an online community for women pursuing computer science degrees as a way to facilitate connections and hopefully build paths to mentorship.

In October 2020, the American Association of University Women—one of the world’s oldest leading supporters of graduate women’s education—awarded Alasmari an international fellowship for her work in leading innovative community projects to empower women and girls.

As a master’s student at UMBC, Alasmari found that an important element of the academic experience was being a part of the community and making connections with her peers and instructors.

Alasmari was drawn to UMBC not only for its geographic location near Baltimore and Washington D.C., but also because of the range of courses in computer science, health informatics, and human-centered computing that she could take as a student. UMBC’s proximity to many regional hospitals, federal agencies, and prominent research organizations was also appealing to Alasmari, who was eager to conduct research related to patient care and use of technology.

In 2013 and 2016, Alasmari attended the Grace Hopper Celebration, an annual conference that brings women in tech together for presentations, panels, and professional development events that highlight the contributions of women to computing. She was struck by how valuable the networking opportunities were at these events. Most importantly, it was there that Alasmari learned the organization was looking to expand and establish chapters around the world, including in the Middle East. With her interest piqued, she was inspired to get involved and make a difference where she grew up.

ArabWIC leaders at the 6th ArabWIC conference in Morocco.

Today, Alasmari manages the online Women in Computing in Saudi Arabia community, which is now 3,000 members strong. “I appreciate that I am part of this work,” she says, adding, “I’ve been growing with the community.”

The Women in Computing in Saudi Arabia chapter officially launched in December 2015 with a one-day event at Badir Technology Incubators at King Abdulaziz City for Science and Technology in Riyadh, Saudi Arabia. The event, which Alasmari organized, featured women from academia and industries who shared their experiences and knowledge with attendees.

“Our organization helped to bridge the gap between local context and the international community,” she says, noting that the community provides support to members through funding to attend conferences, and annual meetings highlight the important work being done by women in computing in Saudi Arabia.

While Alasmari continues to brainstorm ways to connect women in tech, her dissertation focuses on how people with multiple chronic conditions share information in online health information portals, combining her interest in human computer interaction and information retrieval. “I seek to understand how patients formulate their health-related information needs on online questioning and answering communities such as WebMD and PatientsLikeMe, and what factors significantly contribute to the quality of the information needs,” Alasmari explains, adding that she focuses primarily on kidney disease and COVID-19.

At UMBC, Alasmari is advised by Anita Komlodi, associate professor of information systems (IS) at UMBC, and Lina Zhou, a former IS faculty member who is now at the University of North Carolina at Charlotte. She says that they both provide mentorship to her and give her room to grow as a student. It was under their guidance—the very thing Alasmari was seeking in Saudi Arabia—that she began to understand how leadership and community involvement were integral to the academic experience.

As a female computer science student at King Khalid University, Alasmari had access to few scholastic resources outside of the classroom. Her only opportunity to access the internet was through one-hour increments she signed up for in advance. But things will be different for the current generation of students—Alasmari has paved the way for change. Her program Women in Computing continues to grow a larger audience, providing mentors and support to women across Saudi Arabia interested in technology.

Alasmari explains that her specific background has helped shape her character, and impacted her path. “Those unique experiences always inspire me and spark my motivation to elevate the status of women in my own country and the entire world,” says Alasmari.

“I hope the community will grow into more collaboration with international and regional tech organizations. I hope for a more inclusive and diverse environment within the field of computing that especially supports the participation of women and underrepresented minorities.”