UMBC’s newest arts grads forge ahead with creative work, despite a year apart 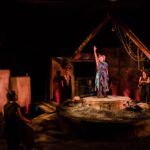 As the pandemic surged across the country last spring, university arts venues closed their doors, but that didn’t stop UMBC artists from creating. Without the traditional opportunities for collaboration that can be so important in dance, music, theatre, and the visual arts, they turned to new approaches and to individual projects with determination and passion.

Time for research and writing

For Brianna Harper, B.A. ’20, visual arts, the pandemic represented an opportunity to focus on her research and writing. “Actually, I’m lucky. What I do is I hole up, I research, and I write,” she says. “During COVID I was able to focus on the materials, synthesizing information without any distractions.”

Harper’s research focuses on the enigmatic paintings of the Swedish artist Hilma af Klint (1862–1944), whose artwork she discovered by chance on a 2019 visit to the Guggenheim Museum in New York. Her capstone project, presented at both URCAD and the Exit Art exhibition in spring 2020, explored the spiritual influences on af Klint’s paintings by using contemporary astrological processes to interpret the art.

“The premise of the paper is that Hilma af Klint created this huge breadth of work, Paintings for the Temple, and yet she didn’t really understand what it meant. She felt she was almost painting the words of ethereal beings, or painting their ideas, sort of like a prophet of theosophy in a way,” says Harper.

“Because her work has astrological symbolism, with which I’m familiar, I was able to synthesize the astrological practices of that time, the early 20th century, and then use that to track her work patterns to see what astrological themes appeared in skies at certain points in her life,” Harper explains. “So it was using 19th-century theosophical astrology as a lens to deepen our understanding of Hilma af Klint’s Painting for the Temple.”

“Noting the deep influence of astrology on af Klint’s artistic practice and spiritual life, Brianna melded iconology, a well-established mode of analyzing artworks, with her own specialized knowledge of astrology,” notes Preminda Jacob, associate dean of the College of Arts, Humanities and Social Sciences and professor of visual arts, who was Harper’s advisor. “The outcome of Brianna’s research was a uniquely exciting interpretation of visual artworks.”

Celine “CJ” Jones-Cameron, B.A. ’20, theatre, will graduate this week having developed a broad range of skills across the discipline. “I really enjoy acting, I really enjoy doing tech, and I really enjoy carpentry and building sets,” she says. “I like the idea that I now have opportunities to do so much because my background is so well-rounded.”

She notes that theatre productions can be complex, involving not only actors, but also set designers, carpenters, costume designers, sound and light designers, directors, vocal coaches and more. During performances, each of those professionals has to coordinate with split-second accuracy. It’s the unifying experience of the performance that most fascinates her.

UMBC’s theatre department usually stages two productions each semester. But their regular kind of collaborative work just wasn’t feasible once students had to pivot to online and socially-distanced learning.

Still, Jones-Cameron noticed an outpouring of empathy from her fellow theatre students, and feels that their inability to stage productions actually brought them closer together. “It’s been nice to see us talk to each other more,” she said. Thanks to the “closeness” of students in the department, she says, “I think we adjusted pretty well.”

“CJ always finds a way to take challenges and difficult situations and merge them with humor. She is a leader and a constant source of energy,” says Adam Mendelson, senior lecturer in the theatre department and one of CJ’s teachers. “The most impressive thing about CJ is her undaunted ability to keep pushing her own boundaries and definitions of what she is capable of even in the face of unprecedented national challenges.”

Jones-Cameron plans to begin auditioning and working in Los Angeles or New York, possibly with a focus on children’s theatre, which has long been one of her passions.

Pramuk Mohanlal-Vargas B.A. ’20, music and global studies, has lived in his native Paraguay, in India, and in the United States, so an emphasis in global studies came naturally. “I love traveling and learning about different cultures and people,” he shares. And his interest in music similarly came about at a young age — “I grew up singing and playing piano,” he says, “and then I took interest in acoustic guitar.”

Mohanlal-Vargas’s musical path has led him to emerge as a singer-songwriter (going by his first name, Pramuk). During the pandemic he managed to complete and release his first album, an EP titled Ordinary Soul, on November 27.

His teacher, Sammy Huh, an affiliate artist in the music department and director of UMBC’s Opera Workshop, describes him as “possessing a beautiful Mozartean tenor instrument and dynamic guitar skills.”

At UMBC, Mohanlal-Vargas has participated in the Camerata Chamber Choir, the Opera Workshop and other ensembles. He credits these opportunities as having helped him gain exposure to a diversity of genres and historical periods.

“UMBC has helped me grow, learning a lot about Renaissance music, classical, romantic — different time periods — different composers and their lives, and even a lot of the theoretical side of things,” he says. “I never would have thought that opera is what I would be studying in college. Singing in Italian, in German, in French — it’s a beautiful thing.”

The past several months have provided Mohanlal-Vargas time for introspection and reflection. “It’s kind of a strange feeling — all virtual, not performing in front of a live audience. That’s what’s made it challenging,” he says. “But it’s also helped me become more grounded, be more still in the moment.”

Banner image: Girls on a Dirt Pile (2019) by Susan McCully, directed by Eve Muson, a production for which Celine Jones-Cameron was a theatrical electrician. Photo by Marlayna Demond ’11 for UMBC.