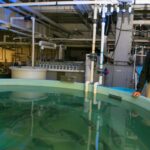 The Binational Agricultural Research Development (BARD) Fund, a partnership program between the U.S. and Israel, has recognized Yonathan Zohar for the economic impact of his research. In a review of more than 1,300 projects funded by BARD in its 40-year existence, the selection committee found Zohar’s to be the project with the greatest impact.

Zohar’s research has enabled high-value commercial fish species such as Mediterranean seabream, European seabass (bronzino), salmon, and striped bass to be grown through hatchery-based aquaculture. This has resulted in an estimated $12 billion in economic growth. A virtual ceremony on November 10 recognized Zohar and representatives of two other projects.

Zohar, professor and chair of marine biotechnology at UMBC, received his first BARD grant in 1985 to investigate how fish reproduction is biologically controlled. Hatchery-based aquaculture was largely impossible at the time, because commercial species would not spawn in captivity. Instead, fish farmers relied on egg-bearing females collected from the wild to supply an often-unreliable source of eggs. Zohar’s work sought to help the aquaculture industry address this bottleneck by enabling captive reproduction.

“Without being able to complete the life cycle of the fish in captivity, namely producing eggs and juveniles, it is impossible to develop a reliable, reproducible, and cost-effective aquaculture industry of the species,” Zohar explains.

A suite of environmental conditions initiates reproduction in the wild by triggering a series of hormonal responses. Rather than try to replicate a complex set of environmental factors in captivity, Zohar’s research aimed to determine how the necessary hormones were failing to initiate spawning in captive fish.

The result was surprisingly simple: He found a single hormone was responsible for jumpstarting a cascade of physiological processes that leads to reproduction, and this hormone malfunctioned in captivity. However, simply injecting captive fish with this hormone proved not enough to trigger reproduction.

Zohar was undeterred. Through painstaking, labor-intensive experiments (technology was much more limited in the 1980s), he found that the fish quickly degraded the injected hormone. It wasn’t staying in the fish’s system long enough to stimulate reproduction.

After additional years of difficult work, Zohar was able to generate versions of the hormone that wouldn’t degrade in the fish. With this treatment, some females produced eggs, but the results still weren’t reproducible enough to be viable on a large scale.

At this point, Zohar began to collaborate with Robert Langer, a chemical engineering professor at MIT and a pioneer in drug delivery systems. With a second round of funding from BARD in 1989, together they developed a delivery mechanism for the hormone that creates an extended-release effect, keeping the hormone in the fish’s system longer and—finally—reliably triggering reproduction.

For Langer, seeing his typically biomedical-focused work applied to the aquaculture industry is rewarding. “Now I’ve seen the drug delivery work that we started 46 years ago impact everything from the COVID-19 vaccine, to new treatments for cancer and heart disease, to cosmetics—and now aquaculture,” Langer says. “I’ve always felt the technology we developed would have a very broad impact and affect many fields, but the effect it has had on aquaculture would never have happened without the collaboration with Yoni.”

After developing the delivery system in Mediterranean seabream and Atlantic salmon, Zohar and colleagues successfully tweaked it for many other species. These advances enabled rapid growth and transformation in the aquaculture industry, delivering large amounts of a protein source and reducing overfishing of wild stocks.

Yonathan Zohar at the IMET Aquaculture Research Center with one of the fish tanks.

Keeping the mission in mind

Zohar is originally from Israel and has been in the United States since 1990, and he has been both the Israeli and American collaborator on grants from BARD. “I was always interested in developing collaborations between the U.S. and Israel, so for me, it was a priority to apply for BARD grants over the years,” he says.

For three decades, Zohar has been a mainstay of the marine biotechnology research community in Maryland. He first took a role at the former Center of Marine Biotechnology (COMB) housed in the Columbus Center in Baltimore’s Inner Harbor. Later, he served as COMB director for 14 years. When COMB restructured into the Institute of Marine and Environmental Technology (IMET) in 2011, Zohar joined the UMBC faculty while also serving as IMET’s director for its first year. Today he is professor and chair of UMBC’s marine biotechnology department.

Throughout his career, Zohar has kept his mission in mind. “When COMB was founded, the mission was always research, education, and economic development. And IMET is the same. This has really been my emphasis, my focus, for all of my professional life,” he says. “I was always involved in research that addressed societal benefits. As one of the early directors of COMB, I really worked to develop this philosophy of basic to translational research.”

What has kept Zohar in Maryland for thirty years, working to address societal needs and support a growing economy through science? “I found the environment here very conducive to that mission, and very supportive of it,” Zohar says. “So, I stayed.”

Header image: Yonathan Zohar at the Aquaculture Research Center at the Institute of Marine and Environmental Technology. All photos by Marlayna Demond ’11 for UMBC.