Pursuing Art and Peace Through Theater of Ideas 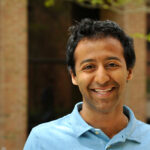 The second week of March 2020, the cast and crew of Asif Majid’s original play were eagerly anticipating their Friday night community reading at a black box theater. Instead of a flood of rehearsals, the play, and the world, shut down due to COVID-19.

Majid ’13, interdisciplinary studies, seized the moment. His play, “Snapshots,” is a series of phone calls between lovers and friends talking about sexuality, Islam, and cultural appropriation. The format of the play easily translated to a pandemic platform: Zoom.

The Convergence Theatre actors learned to switch cameras, mute and unmute, and make “set” changes by changing camera angles. The actors and crew rehearsed for “an insane” two weeks, Majid says, laughing. He cobbled together a livestream with an ethernet cable and a router, then ran the program from his parents’ spare office.

The play debuted March 27 on HowlRound, a theater streaming platform, when few other theater companies were making online theater. More than 400 people in 18 countries watched. After a little tinkering with the production, they streamed the play again in June, and drew nearly as many people. Majid was thrilled by the response, and by the creativity they conjured.

“How do we continue to care, and to tell the stories that really matter?” Majid asks. “This shows the possibility of digital theater, and what it can accomplish.”

On November 8, Majid will talk about the experience at TEDx UMBC.

Taking charge of his education

Majid devised his own education at UMBC, taking courses in history, Africana and global studies, and politics.

Steve McAlpine, assistant director of individualized studies (formerly interdisciplinary studies), says he had weekly conversations with Majid about his program, and watched it expand from a political take to sociological and psychological perspectives on conflict. “But what was extraordinary was his leap to the performing arts—especially theater—as a vehicle for building empathy for others,” McAlpine says.

Storytelling in Baltimore, 2016. Photo by The Stoop.

Majid played percussion with the school’s orchestra, and McAlpine sat next to him while they were beating drums outside the University Center Friday afternoons and at gigs in Maryland, D.C., and Virginia with Straight Up Tribal. At UMBC, Majid became convinced that performance and theater could bridge divisions and resolve conflicts.

“That is one of the hallmarks of the institution, how it gives the students the capacity to take charge of their education in a real way,” Majid says.

“From the very first classes he showed the qualities of intelligence, curiosity, creativity, and passion that have made him such a wonderful interdisciplinary and engaged scholar and social change agent today,” Taylor says.

“His vision of transforming intercultural conflict through participation in dialogue and creative arts has remained a steady beacon leading him into deeper research and scholarship and leadership experiences of creating spaces of hope—places where theater and musical arts facilitate with reflection and dialogue on new ways of thinking and being that bridge differences and conflicts.”

A Sondheim and Boren scholar at UMBC, Majid studied abroad for two semesters in Morocco, and wrote a play about women’s sexual harassment by young Muslim men and other human rights violations. As part of his undergraduate research project, Majid later staged the play at UMBC.

Through his master’s degree in conflict resolution from Georgetown University and a doctorate in anthropology, media, and performance from the University of Manchester, Majid maintained ties to UMBC, even teaching a few classes.

“He brought so much energy to his teaching stint with the global studies program,” says Brigid Starkey, director and senior lecturer of political science. “He is a master storyteller and knows how to involve students in a process of discovery over the course of a semester. Learning is never rote as he looks for global stories in many places that others don’t even think to look.”

Seeking art as a route to equity

During his doctoral studies at University of Manchester, the city’s arena was bombed in May 2017 by a British Muslim man who was killed in the blast along with 22 others. Majid wrote a series of articles interrogating the nation’s response.

Then he jumped into making theater with young British Muslims. He faced suspicion of working with the government’s counterterrorism efforts, the difficulty of making connections in the community, and actors’ hesitancy to perform in public. But with Majid’s guidance, the group developed a radio play, “The Wedding,” about identity, interracial relationships, and sexuality in Muslim communities.

He also played Mowgli as the only person of color in a Liverpool children’s theater December 2017 production of “The Jungle Book” and is writing a book chapter on the experience, tentatively titled “The Manipulation of Mowgli,” for the Routledge Companion to Theater and Young People.

Majid applied for academic positions for a frustrating two years, then became a Mellon/American Council of Learned Societies fellow with the San Francisco Arts Commission. He’s working to ensure grants are awarded racially equitably, and absorbing the complicated dance of public art administration.

“There’s something around the intersection of racial equity plus the arts that gives me a lot of hope,” Majid says. “I have realized…this is public service, something that I’ve been missing. It dates to when I was at UMBC as a Sondheim Scholar. That’s what I got into the university to do, to engage in public service, and here it’s coming full circle.”

Tune in to all the TEDxUMBC speakers on November 8, 2020.