Amy Coney Barrett May Be the Next Woman on the Supreme Court – but Does a Nominee’s Gender Matter? 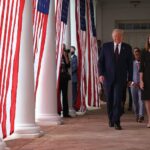 President Donald Trump has so far appointed fewer women as federal judges than any president since Ronald Reagan. In the Senate confirmation hearings now underway for Amy Coney Barrett, Republic senators have repeatedly pointed out that the president is appointing a woman to the Supreme Court.

I am a scholar of the politics of courts who has studied the demand for greater gender and ethnic diversity on courts around the world. Research shows gender diversity in the judiciary matters – but not because women and men necessarily judge differently.

Women on the bench

Jimmy Carter was the first president to take gender diversity in the courts seriously. The federal bench was “almost entirely male and white” when Carter entered office in 1977, according to professors Rorie Solberg and Eric N. Waltenberg. In his four years as president, Carter appointed women to more than 15% of the available federal district court positions.

Reagan appointed far fewer women by percentage to the federal courts than Carter – just 10% of his nominees between 1981 and 1989 were women – but answered concerns about that by putting the first woman on the United States Supreme Court, appointing Sandra Day O’Connor in 1981.

Later presidents went on to appoint more women to the judiciary, including the Supreme Court. Presidents Clinton and Obama appointed a greater percentage of women to federal courts than either President George H.W. Bush or George W. Bush.

For years now, political scientists have looked at judges’ rulings to see if they can identify differences in outcomes based on their gender, particularly in the lower courts, which hear more cases than the Supreme Court.

But women do not all agree on legal issues any more than men do. What differences researchers have found – for example in how judges handle immigration cases – can be explained by work experience. If women more often entered immigration courts after first working as immigration lawyers while men more often started as prosecutors, that could account for what appear to be gender-based differences.

Both men and women both learn from their lives, including in ways that will affect how they judge. When people ask about gender and judges, many have women in mind. But men also have life experiences that contribute to how they judge. Untangling gender or race from work, life and education experience – and from the political party of the president who appointed them – is messy.

Antonin Scalia served both President Richard Nixon and President Gerald Ford before he became a Supreme Court justice, an experience most analysts argue shaped his legal interpretations about executive power. But Scalia wouldn’t have had that experience if he weren’t a man. So did his judgment reflect his experience or his gender?

The case for diversity

No matter how you answer that question, diversity of life experience is one reason gender representation on the bench matters.

Here’s another: Not seeing women in leadership roles feeds beliefs that women do not belong in leadership roles. And exemplars – such as the only woman in a high-level position – are vulnerable to harsh judgments that arise from discriminatory beliefs based on their gender.

These biased expectations are very difficult to change.

As more women hold positions in fields dominated by men, like the law, however, it becomes more difficult to believe that all women are essentially the same and easier to assess them based on their work. Furthermore, research shows teams of people with more diverse life experiences often come up with more ways to address a problem.

Employing women equally in political positions, including on courts, is also a critical aspect of women’s hard-won equality. Gender diversity is one result of increasing expectations that politics and law not discriminate based on sex – an achievement Ruth Bader Ginsburg helped secure.

That right, explicitly, does not hinge on gender-based differences in behavior. Women can and do vote however they choose because they are equal citizens. They can and do serve on juries, just as men do, without giving a reason for why they should.

Four women – Justices Sandra Day O’Connor, Ruth Bader Ginsburg, Sonia Sotomayor and Elena Kagan – have now served on the small, slow-to-change Supreme Court, each with their different way of interpreting the law. So Americans are free to assess, and even disagree with, the legal interpretation of a Supreme Court nominee like Judge Barrett without feeling they’re simultaneously judging all women. 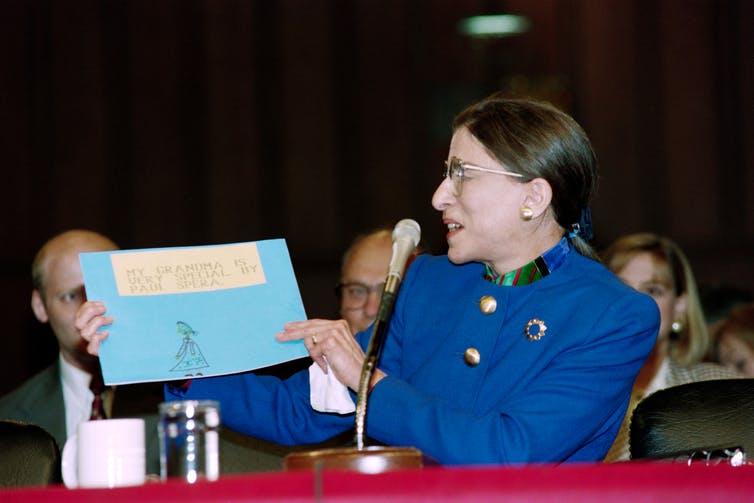 Ginsburg shows off a drawing made by her grandson at her Senate confirmation hearing in 1993. Jennifer Law/AFP via Getty Images

Barrett and Ginsburg could not be more different.

Justice Ginsburg began her career advocating for gender equality with the American Civil Liberties Union’s Women’s Rights Project, a project she organized. Over her many decades on the bench she became a feminist icon, inspiring movies and a children’s book.

Judge Barrett, in contrast, has been a judge since only 2017, making it difficult to assess her legal interpretation. But she is backed by the leading conservative advocacy group, the Federalist Society, which the Trump administration relies upon to identify judicial nominees. The Federalist Society is pro-guns, anti-abortion and anti-business regulation.

As a law professor, Barrett wrote articles that give clues to how she might judge. She has criticized the Supreme Court’s decision upholding part of the Affordable Care Act, for example. And some abortion advocates cite her writing on how to weigh legal precedent to argue she would be willing to overturn earlier court decisions that protect reproductive rights.

These big differences between Justice Ginsburg and Judge Barrett – not simply their shared gender – would characterize Barrett’s work on the Supreme Court.

[Like what you’ve read? Want more?Sign up for The Conversation’s daily newsletter.]