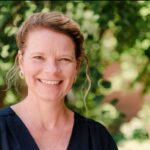 UMBC’s Kindel Nash, associate professor of education, and colleagues have produced one of the first books to address culturally sustaining literacy education in early childhood, Toward Culturally Sustaining Teaching (Routledge 2020). The book shares findings from the first cohort of the Professional Dyads of Culturally Relevant Teaching (PDCRT) program. This program pairs educators who are interested in developing culturally relevant literacy practices in diverse pre-K, kindergarten, first, and second grade classrooms.

Culturally sustaining pedagogy, Nash explains, focuses on countering structures that systematically erase the culture and language of communities of color.

Nash notes that widely adopted practices in early childhood education view communities of color from a highly problematic deficit mindset. “Culturally sustaining teaching is a conscious decision to teach and work within communities of color from an asset mindset,” she says. This framework has been widely researched in secondary education but, Nash notes, little has been done in early childhood until now.

H. Samy Alim and Django Paris are recognized for developing foundational scholarship in this field. Alim is the David O. Sears Presidential Endowed Chair in the Social Sciences and professor of anthropology and African American studies at the University of California, Los Angeles, and the founding director of the Center for Race, Ethnicity, and Language. Paris is the inaugural James A. and Cherry A. Banks Professor of Multicultural Education and director of the Banks Center for Educational Justice in the University of Washington College of Education.

“Culturally sustaining pedagogy is about revitalizing and transforming, about ultimately undoing schooling as we know it to return to and imagine anew the ways our communities have sustained and must sustain each other, our society, our planet,” Paris writes in the book’s foreword. “As we continue to build together, I remain grateful for projects like this book, which are part of our collective effort to sustain the world we need, with our ancestors, our young ones, our elders, forward.”

Sustaining success for all

The book provides in-depth examples from the experiences of the first PDCRT cohort, which paired four highly successful early childhood educators with researchers across the U.S. The researchers found that the teachers they were paired with were already applying this framework without previous training.

Patricia Piña, a dual-language early childhood educator in Kansas City, Missouri, was Nash’s PDCRT partner. Piña valued and connected the culture and language of her predominantly Latinx classroom by using different culturally sustaining teaching strategies. She created bilingual books and made assessments language-accessible. Among other strategies, she also used translanguaging daily—communicating concepts and ideas via different cultural frameworks in a student’s native language.

Piña’s students experienced great success developing age-expected skills in English and Spanish across all subjects. However, as successful as Piña was as an educator, she ultimately left teaching after a young child who spoke Spanish in the classroom was referred for special education services after being tested in English. This experience had unfortunately happened many times over her teaching career.

Piña’s experience is one many teachers of color have to face. They must not only be their own advocate in a profession dominated by white teachers and administrators, but they must also often be the only advocate for students of color, Nash says. It is something she has witnessed frequently in eight years of research with high-performing urban teachers.

“The dominant ideas about schooling are connected to Western individualistic notions of learning that broadly support how White American students learn,” explains Nash. “It is a very inequitable system.”

Nash feels that there is still a long journey to successfully implement culturally sustaining teaching in the U.S. education system, particularly for White teachers who primarily work with other White educators. Further, she explains that it is not enough for White teachers to have close relationships with people of color. She notes, “White educators must unlearn the deep feelings about communities of color they have been socialized to have in a system built on slavery and White supremacy.”

Nash hopes educators understand that this is why recruitment and retention of educators of color benefits everyone. “White educators and researchers will not be able to apply culturally sustaining teaching if they are only working with other White teachers in reflecting on their Whiteness,” says Nash.

Her book is an example of the impact teachers can have when they commit to this work. “This includes not only changing how we teach,” she says, “but whom we teach with.”