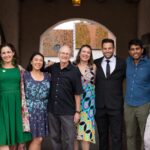 Mantis shrimps have earned wide acclaim in popular culture for their punching limbs, bright colors, and, perhaps most of all, their unusual eyes. “Everybody knows about them now,” says Tom Cronin, professor of biological sciences and a world leader in mantis shrimp vision research. “These things are memes.”

However, despite the increase in public awareness and a wealth of research on this diverse group of crustaceans, it turns out mantis shrimp still have a few tricks up their antennae.

It’s well understood that mantis shrimps’ eyes are extreme. For example, human eyes have three types of color receptors, which detect red, blue, and green light, respectively. Human eyes also have three different proteins called opsins, which are generally involved in light detection. One opsin is at work in each kind of color receptor. Mantis shrimp, on the other hand, have 16 receptor types (the most known in any animal species). The UMBC team, led by postdoctoral researcher Megan Porter, predicted that mantis shrimps would also have a one-to-one ratio of color receptors to opsins. Accordingly, they expected to find 16 opsins in their shrimp.

Instead, the shrimp offered up more surprises. After more than a decade of painstaking experiments, Porter, Cronin and colleagues have found that instead of the expected 16 opsins, mantis shrimp eyes have  at least 33 types of opsins. The relationships between opsins and color receptors were completely different from what they expected, too. They published their findings in Proceedings of the National Academy of Sciences in June.

“One of the reasons I love science is that we took this animal with an exceptional visual system, and it’s become even more complex,” Porter says. “Every level that we look at adds another layer of complexity to how the visual system is working.”

Neogonodactylus oerstedii, the mantis shrimp species that the team studied for the opsin research. Photo by Rickesh Patel.

The surprising finding in mantis shrimp is part of a trend in vision science. “We thought we understood how animal vision works,” Porter says. “Then people started looking at the molecules involved as techniques became more available, and it turns out we don’t understand as much as we thought we did.”

For example, other teams have reported upwards of 40 opsins in deep-sea fish, who seemingly have little reason to invest in elaborate vision systems. Still other groups have found large numbers of opsins in dragonflies and other insects.

Advances in genetic sequencing technology have enabled this boom in vision science. Partway through Porter’s project, cutting-edge methods for sequencing genetic material came on the market. While the newest techniques were still prohibitively expensive for most labs, the previous generation of sequencing—still much better than standard techniques—suddenly became affordable.

As a result, Porter and teammates Michael Bok, Ph.D. ’13, biological sciences, and former postdoctoral fellow Hiroko Awata were able to sequence essentially all of the RNA found in the mantis shrimp eye. This collection of RNA is called the “transcriptome,” because it represents the DNA that has been transcribed, or converted from DNA to RNA.

The cell uses these transcripts as instructions to build essentially all the proteins in the cell. From what the team already knew about opsin sequences, they were able to identify the transcripts that gave instructions specifically for opsin proteins.

Tom Cronin (left) with lab members and collaborators at the airport on Lizard Island, Australia, one of the team’s field research sites, in 2014. Megan Porter in center (green shirt) and co-author Michael Bok at far right. Photo courtesy Tom Cronin.

“Historically, these kinds of studies wouldn’t have been possible,” Porter says. “These techniques have made it possible to investigate a much broader range of animals, and to find out so many amazing things.”

The transcriptome results were so shocking that it took several more years for the team to gather enough data to confirm them with full confidence. “We just kept amassing data, and the story kept getting more complicated,” Cronin says. Porter adds, “First we had to convince ourselves, then we had to convince the rest of the scientific world.”

Cronin credits Porter for persevering, even when journals rebuffed initial attempts at publishing about the work because it departed so drastically from established knowledge. “Megan is very tough and very able to stick with a problem,” he says. “She kept sticking with it, and she filled in all the little holes in the data set one by one.”

For her part, Porter felt buoyed by Cronin’s guidance. “He pushes you to be a rigorous scientist, challenges you to think deeply about your work, and is really just a wonderful mentor and collaborator,” she says. “And if you look at the up-and-coming people in this field today, a large percentage of them came out of his lab. He’s had a really big influence.”

Enticing clues about what opsins do

Part of the UMBC team’s validation work involved figuring out where in the eye, and in which cell types, different opsins were present. Those experiments resulted in some enticing clues about the function of some of the opsins.

For example, the team found a few opsins toward the top of the eye that they believe are sensitive to blue light. That placement is reminiscent of blue-light-sensitive opsins found in insects. Insects use the opsins to detect patterns of polarized light in the sky, which could be important for navigation.

Rickesh Patel, Ph.D. ’21, biological sciences, was thrilled by the findings, but not completely surprised. He recently published research with Cronin that indicated mantis shrimp use polarization patterns for navigation. “I think it’s really cool that we can use molecular tools to give us insight into the function of the eye that we’ve missed,” Porter says.

A female peacock mantis shrimp, one of the most colorful species, carrying her eggs. Photo by Christian Gloor, used under CC-BY-2.0.

Next up for this research is looking at the proteins themselves, rather than the transcripts that hold their instructions. “I expect that as we continue to look at every level that we will continue to find unexpected and fascinating complexities,” Porter says. “My joke hypothesis is that opsins are everywhere, doing everything. But I do think their functions are much more diverse than anyone had guessed.”

As Cronin puts it, mantis shrimp “are like the goose with the golden eggs. Just when you think they’ve run out, there’s another one that pops out.”

And on top of the surprises that keep turning up in mantis shrimp vision specifically, Porter wonders what established scientific paradigms might be the next to fall as our ability to examine the natural world continues to advance.

“What is the next thing that’s going to totally revolutionize our understanding of things we thought we had figured out?” she asks. Technology can’t do the research by itself, though. It will take creative and determined scientists like Porter, Bok, and Awata, and supportive mentors like Cronin, to change the way we understand the world.