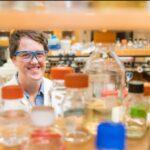 As we get older, our body systems just don’t work quite like they used to. Why this happens is still somewhat murky. Erin Green, assistant professor of biological sciences, has just received a two-year, $500,000 exploratory grant from the National Institute on Aging to help unravel one piece of the aging puzzle.

Green and her team study how adding a small group of atoms called a methyl group—three hydrogen atoms bound to a carbon atom—to certain proteins affects how the cell functions. The new grant will allow her to focus on a specific protein, an enzyme called Set6, that adds methyl groups to other proteins. Based on preliminary data, Green believes Set6 adds methyl groups to proteins involved in the body’s ability to do “quality control” when it produces proteins.

When a protein is made, it starts as a string of building blocks called amino acids. Then, with the help of a set of enzymes, the protein folds into a three-dimensional shape that allows it to do its job. Usually, the folding process goes off without a hitch. And if there is a problem, usually a misfolded protein is quickly destroyed by the cell. But as we age, proteins are misfolded more often, at the same time that the mechanisms for protein destruction start to fail. That means more problem proteins build up in the cell. In severe cases, this can lead to diseases like Alzheimer’s and Parkinson’s.

A lot to learn

Green’s team conducts its research in budding yeast. Yeast is a valuable study organism because it’s one of the simplest eukaryotes, a type of organism whose cells have the same fundamental characteristics as human cells. They’re easy to work with, and they still have enough in common with humans to provide useful information.

“Genetic and biochemical manipulation in yeast is all very easy and available,” Green says. “We can combine information from many different tests to get a much more comprehensive look at the molecular role of these proteins in a faster, easier, cheaper way.” Some of those tests will be conducted by Green’s collaborators at Stanford University in California and the Van Andel Institute in Michigan.

Set6, the methyl group-adding enzyme that’s the focus of the new grant, is in a group of enzymes called the SMYD family. There are two SMYD proteins in yeast and five in humans. One of the yeast proteins has been studied extensively by Green’s group and others, but little is known about Set6.

Deepika Jaiswal, a postdoc in Green’s lab, has been studying Set6 since 2016. “I started working on Set6 when there was no strong information about what it does in the cell,” she says. It is her work that has started to reveal the role of Set6. “It has been a long journey, but it’s satisfying to see it going in the right direction.”

“Because Set6 is so closely linked to the same family of enzymes in humans, we thought we could take advantage of the fact that there’s still a lot to learn,” Green adds, “and hopefully break open a broader understanding in the field of what its role is, especially in the context of protein quality control.”

Deepika Jaiswal, a postdoc in Erin Green’s lab, will take the lead on research funded by the new NIA grant.

Green will employ several techniques to gain a better understanding of the role Set6 plays in protein quality control. She wants to find out exactly which other proteins it adds methyl groups to, and also learn more about when in the protein production process Set6 is adding the methyl groups. Initial data suggest that it’s very early in the protein production and folding process.

Since much of what she’ll be exploring is uncharted territory with Set6, Green expects occasional setbacks. However, she’s optimistic that the endeavor will provide valuable insights into the role of Set6. The results could eventually have implications for pharmaceutical development, particularly for the SMYD family of enzymes. Today, companies are exploring possible targets for therapies without fully understanding their functions. Knowing more about proteins like Set6 could point them toward new targets, or help them avoid heading down dead ends.

“It may not work exactly how we think, but I think at the end we’ll learn something about this particular enzyme family,” Green says, “and uncover more of its biological role in the protein quality control pathway.”

Banner image: Erin Green in the lab. Photo by Marlayna Demond ’11 for UMBC.