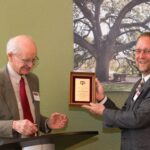 This spring, Stephen Freeland, director of individualized studies and associate professor of biological sciences, received the Texas A&M Trotter Prize in Information, Complexity, and Inference, an endowed lecture series seeking to reveal connections between science and religion. He traveled to Texas A&M University in April to deliver two talks about his research on the origins of life.

From Freeland’s perspective, the prize creates a space to “honor and debate about where evolution intersects with deeper, multi-dimensional concepts about the purpose of us being here, or what science is telling us about our place in the universe.” While not structured as a formal debate, the prize is given to two winners each year with contrasting views, and they present their talks at the same event.

Freeland’s research has always centered on how and why living things evolved a system of genetic coding, which has taken him from biology to astrobiology and has inevitably led him to grapple with one of the big questions many people ask themselves: “Where do we come from?”

Freeland said he was proud to add UMBC to the list of winners’ institutions, which in the prize’s 17 years has included many renowned bastions of scholarship in the United States and the United Kingdom, including Oxford, Cambridge, MIT, Harvard, Stanford, University of Chicago, UC Berkeley, Princeton, and Cornell.

Specifically, Freeland said he was thrilled to follow in the footsteps of previous winners and scientific giants, such as Francis Collins, former director of the National Institutes of Health and leader in the Human Genome Project, and Francis Crick, co-discoverer of the structure of DNA. “These are people whose names have influenced profoundly my career and thinking,” Freeland says, “and I respect them highly.”

“That was a very useful point to counter the fundamental claim from intelligent design that evolution requires a degree of complexity that is different from anything science knows how to explain,” Freeland says. “No it doesn’t—organisms absorb information from the environment. That’s what we’ve been saying for 150 years.”

Intelligent design (ID) is a theory outside mainstream science claiming organisms that are strikingly well-tuned to their environment or lifestyle could not have arisen by natural processes alone. Thinking deeply about ID over the last several years has led Freeland to appreciate its usefulness as a foil for evolution.

“Thinking about why my own education and research cause me to disagree with ID’s claims has given me clarity about how that applies to the origin of life,” he says, “and this same deeper thinking has helped advance my own research, and examine how it does or, in some cases, does not, align with  current scientific paradigms.”

One of the most popular paradigms in the origin-of-life field, the “RNA World Hypothesis,” posits that RNA, a slightly different form of genetic material that is present alongside DNA in all organisms, arose before the first living things and eventually made life possible. Based on this hypothesis, many researchers are currently struggling to determine how RNA could have come to exist before life.

However, after a great deal of study, including contemplating the claims of ID, Freeland thinks, “We should be looking for what chemicals information from the environment is flowing into, pre-RNA. What is this curious molecule that preceded RNA, that may look nothing like it? Are we asking the wrong question if we’re trying to make RNA’s existence before the first living things plausible?”

Freeland took the stage this year as the orthodox scientist of the winning pair, because he espouses the traditional scientific view of evolution and natural selection. So, the fact that he is also a committed Christian may have taken some listeners by surprise. In fact, efforts at the intersection of science and religion have been a core part of Freeland’s work for decades.

In March, he helped organize UMBC’s events sponsored by the American Association for the Advancement of Science focused on the intersection of science and religion. He also  serves on the advisory board for Biologos, an organization seeking to show Christians that science, and specifically evolution, need not conflict with their worldview. In addition, he has spoken internationally and taught courses on the topic at UMBC for many years, and is excited this summer for the first time to work directly with a Muslim youth organization on an environmental stewardship project, in collaboration with individualized studies instructor Tabassum Majid ’10, interdisciplinary studies, M.A. ’18, management of aging studies.

As a scientist and a Christian, Freeland explains that in his worldview, truth extends beyond science, to frameworks such as spirituality and religion.  Science and religion influence each other over time, and they are not mutually exclusive, he says.

“There are worldviews that shape what we believe, and it’s not clear to me that it’s science that drives those worldviews. Science sometimes catches up to that worldview by saying yes, when we measure by science we do find that truth.” And sometimes, “changing worldviews will revolutionize what truths science is capable of seeing.”