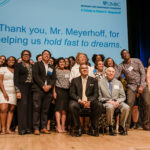 Thirty years ago, Baltimore philanthropist Robert E. Meyerhoff came to then-UMBC vice provost Freeman Hrabowski with the seed of an idea: to create a program that would enable all students, regardless of background, access to the highest levels of science.

Last week, hundreds of Meyerhoff Scholars Program alumni filled an auditorium stage to thank Meyerhoff for his bold vision. They also came to share their own experiences as proof that he was right to believe in their potential and invest in their futures so many years ago.

Standing on the shoulders of giants

The night of gratitude kicked off an emotional weekend of fellowship and reflection celebrating the Meyerhoff Scholars Program’s 30th anniversary. Over the course of Friday evening, alumni and supporters shared stories of the successes they attribute to a community that believed in them from the start—one that in the words of poet Langston Hughes let them “hold fast to dreams.”

“Meyerhoffs are ‘all in’ types,” said Keith Harmon, director of the program. “Now as alumni, they are distinguishing themselves as STEM professionals, changing the face of the STEM workforce, and showing the world how right Bob Meyerhoff was to believe in them in the first place.”

The first of its kind in the country, the Meyerhoff Scholars Program launched in 1989 with a small cohort of African American men interested in pursuing graduate degrees in science, engineering, and related fields. In the years that followed, the program expanded to include women and students of all backgrounds who were committed to increasing the representation of minorities in science and engineering.

As we look forward to celebrating Bob Meyerhoff and #Meyerhoff30 this weekend, let’s first take a trip down memory lane, courtesy of our past cohorts! #TBT

Today, more than 1,100 Meyerhoff alumni are changing the face of science across the country. The program is a national leader on the forefront of efforts to increase diversity in STEM fields, and UMBC is the nation’s number one producer of African American undergraduates who go on to earn M.D./Ph.D.s.

As alumni lined up on stage to share their stories, Kamili Jackson Shaw M5, ’97, M.S. ’99, mechanical engineering, talked about her first impressions of the program as an entering student.

“The Meyerhoff Scholars Program was the first time I had ever been around a critical mass of high-achieving African Americans, and it was extremely important to my growth as an individual,” said Shaw. Today, she leads the safety, quality, and management systems division for the NASA Stennis Space Center. “It gave me confidence and humility at the same time,” she says. “For the first time, I was able to simply ‘be.’” 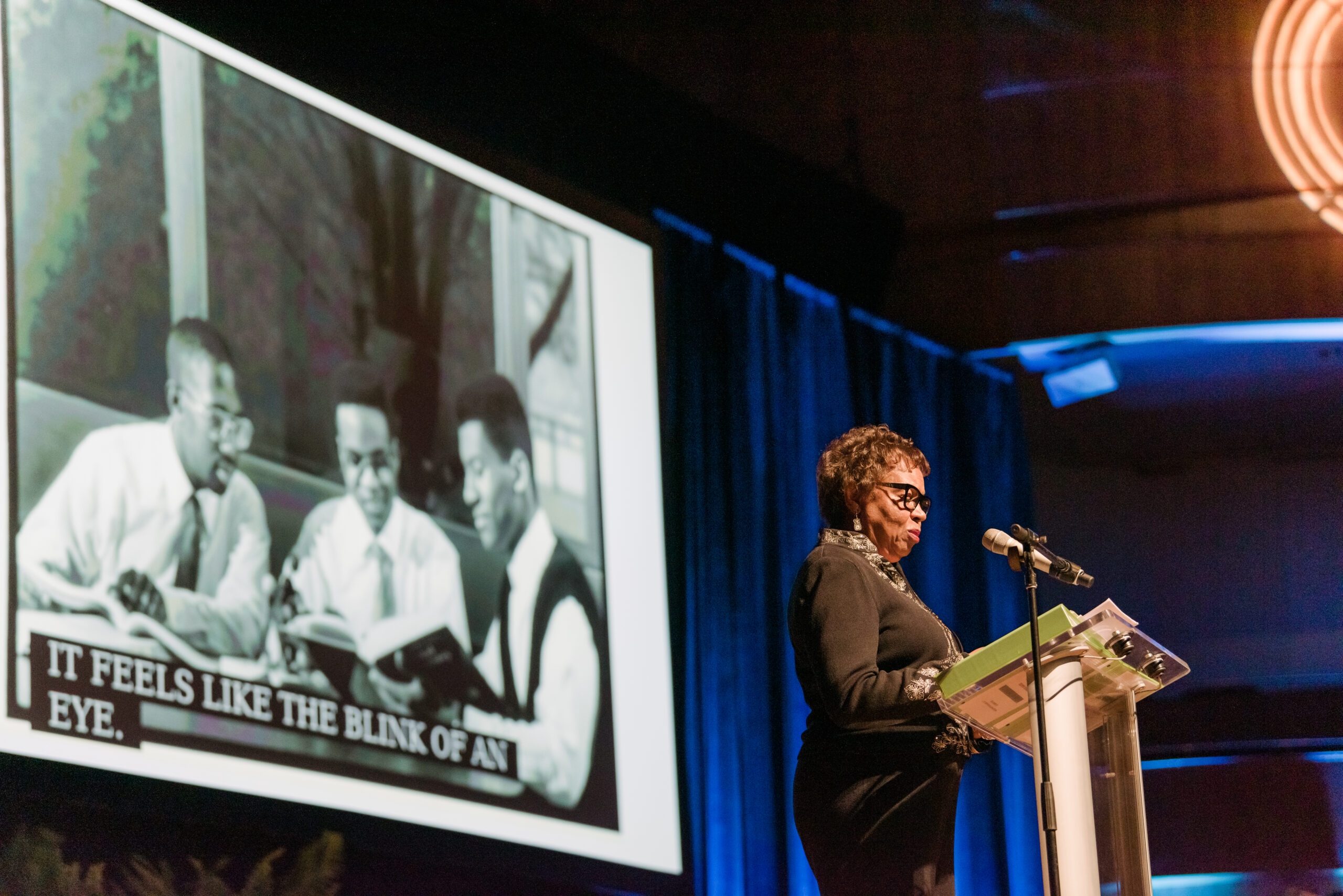 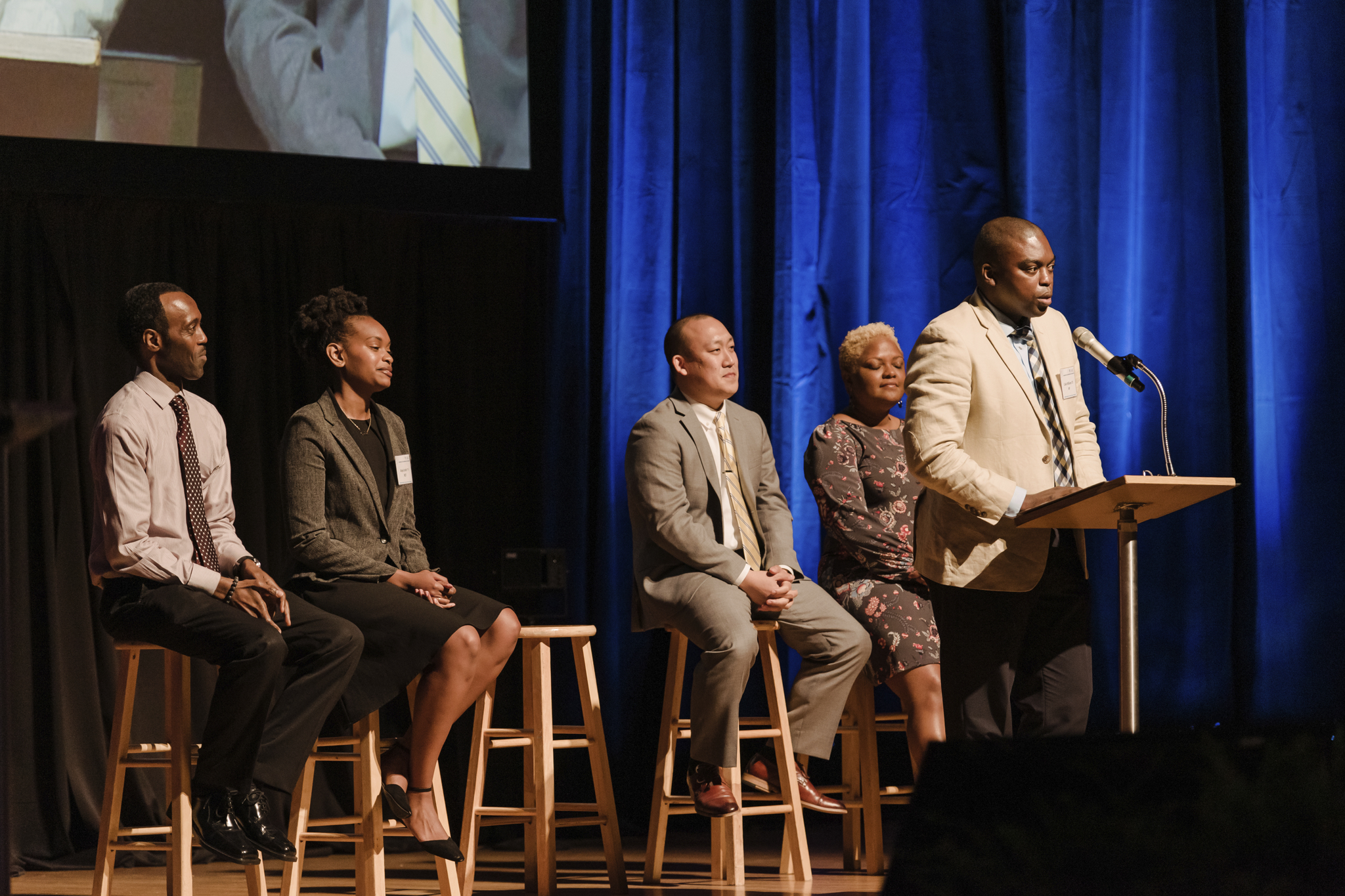 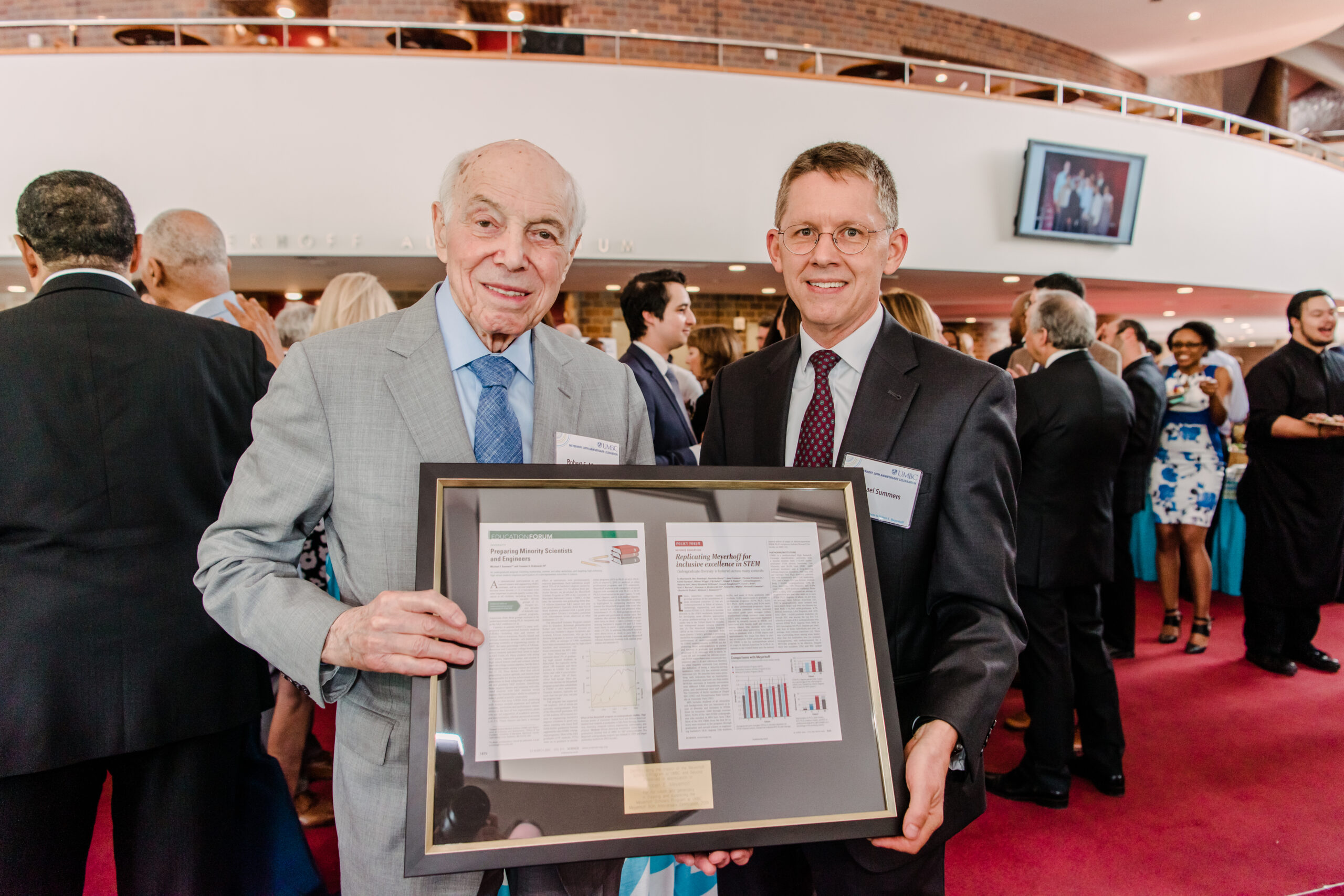 The night ended with what program alumni called a “Gesture of Gratitude”—the announcement of a $500,000 gift made by alums from across the decades to support the program. As impactful as the gift will be, it was also symbolic, matching Robert Meyerhoff’s original gift to UMBC. And they have no intention of stopping there.

“Sometimes you don’t understand legacy until you see the fruit of it, and 25 years later, I see the magnitude of the program,” says Felicia Sanders M4, ’96, chemical engineering. Sanders, a, leadership-level supporter of the program, says giving back “is a responsibility. It’s a necessity.”

Kellie McCants-Price M2, ’95, interdisciplinary studies, was in the first Meyerhoff class that included women, one year after its founding. “I didn’t realize how significant it was until about 10 years out,” says McCants-Price, who holds her Ph.D. in psychology. “I saw how prolific it was—how many women were graduating—and realized that we held the door open for them.”

Alums took to social media to share their memories and thoughts on the celebration, including U.S. Surgeon General Jerome M. Adams M4, ‘97, biochemistry and molecular biology.

I’ve shared that the first time I met a black doctor was when I was in college at @UMBC. That’s why I was so proud to attend the 30th anniversary celebration of the Meyerhoff program tonight. A ballroom packed full of minorities with MDs and PhDs. #RepresentationMatters pic.twitter.com/M8AcSwzQea

After Friday’s formal event, alumni gathered in the Event Center on Saturday for a family-style reunion. Many of them brought their children to enjoy a day of food, cohort cluster game competitions, networking, and campus tours. Later that evening, many also enjoyed a dance party hosted by the Meyerhoff Alumni Advisory Board.

Alumni left feeling re-connected as friends, as scholars—and ultimately, as part of a family.

Kafui Dzirasa M8, ’01, chemical engineering, summed up this sentiment as he thanked Robert Meyerhoff on Friday night. “What has increasingly become obvious to us—which you have known all along—is that the power of this community is us, working together as a family.”

It was a great weekend celebrating #Meyerhoff30 and Bob Meyerhoff! Thank you to everyone who made it such a memorable celebration! @meyerhoffalumni

Visit meyerhoff.umbc.edu/30th for more photos and information about the program.